Say no to Robbing Hood

He canât be trusted on March 6

EDITORâS NOTE: Jonathan Narcisse passed away on Feb. 17, 2018. He submitted this Guest View just two days prior to his death. 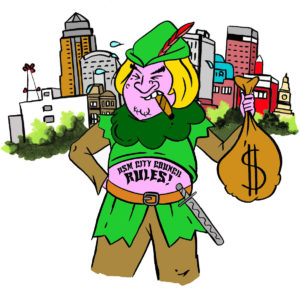 On March 6, residents of Des Moines will be asked to vote on Measure A â a near 20 percent increase in the sales tax.

The absence of necessary details, which Dr. Witherspoon provided when he asked for a sales tax hike for Des Moines Schools, is an indictment on the City of Des Moinesâ trustworthiness and a compelling reason to vote no on March 6.

The Greater Metropolitan community has thrived under great suburban and regional leadership beginning with the Partnership, but Des Moines proper is a violent, high-poverty, blighted hole in the middle of prosperity.

Downtown is beautiful. It should be after city leaders went $300 million in debt to fund it and other vested interests.
Des Moines also has pockets of affluence â thatâs why there is new curbing in front of the building that houses Manhattan Deli and the Greenwood Lounge on Ingersoll. It was unacceptable that those living nearby, including South of Grand, should have to drive home and see âuglyâ looking curb scape.

Meanwhile, Iâve taken various community leaders on tours of parts of Des Moines that look like 1950s Mississippi.
These areas have been neglected for a generation, and it is simply incredulous to believe the City of Des Moines, with its track record, is going to have anywhere near the money required to keep its Measure A promises.

Fact: $18.5 million annually (their number, not mine) immediately goes toward a tax cut.

In other words, City leaders are either lying about keeping their Measure A promises or they intend to raise other taxes and fees once the new sales tax checks have been deposited.

Those who gave us the Franchise Fee debacle; who neglected public safety and neighborhoods while accumulating hundreds of millions in special interest driven debt; those who gave us the Grand Avenue Bridge fiasco and other mismanagement disasters CAN NOT BE TRUSTED, especially since their numbers and promises confirm they are lying to us â again.

I supported the Dallas County sales tax increase last November. I would support an increase for Polk County and suburbs like West Des Moines, Ankeny, Altoona and Urbandale. Their leadership is competent. City of Des Moines leadership is not.

For too long, Des Moines City Officials have failed the citizens. They do not deserve to be bailed out again. We just did that, and look at the results â a record homicide rate in 2017; higher poverty rates!

Finally, more than 75 percent of the families with children in the Des Moines School district struggle to feed them.

This tax brutalizes them.

I saw a video of our mayor â a good man but a very wealthy man â tell a college student who opposed the tax that she should cook her food. Alert: She buys more than food; she buys hygiene products, too.

Single moms buying diapers and wet wipes, the elderly, the disabled and working families are literally being asked to pay more so half that money can be immediately gifted to liquor stores, check cashing centers, slum lords and major out-of-state corporations.

The mayor told her itâs only $4 per month. Itâs much, much more than that but thereâs a reason some of us take cans and bottles back to the store. In this economy, for some of us, every penny, every nickel, every dime matters.

Those pennies, nickels and dimes should not be seized from our most vulnerable citizens and deposited in the bloated coffers of the powerful just because they can. ♦

Jonathan Narcisse was a candidate for Governor of Iowa in the 2010 and 2014 elections and is a past school board member in the Des Moines School District. He submitted occasional guest columns for CITYVIEW.