Nick Kuhn at The Hall

Unique business plan links a profitable business with a nonprofit. 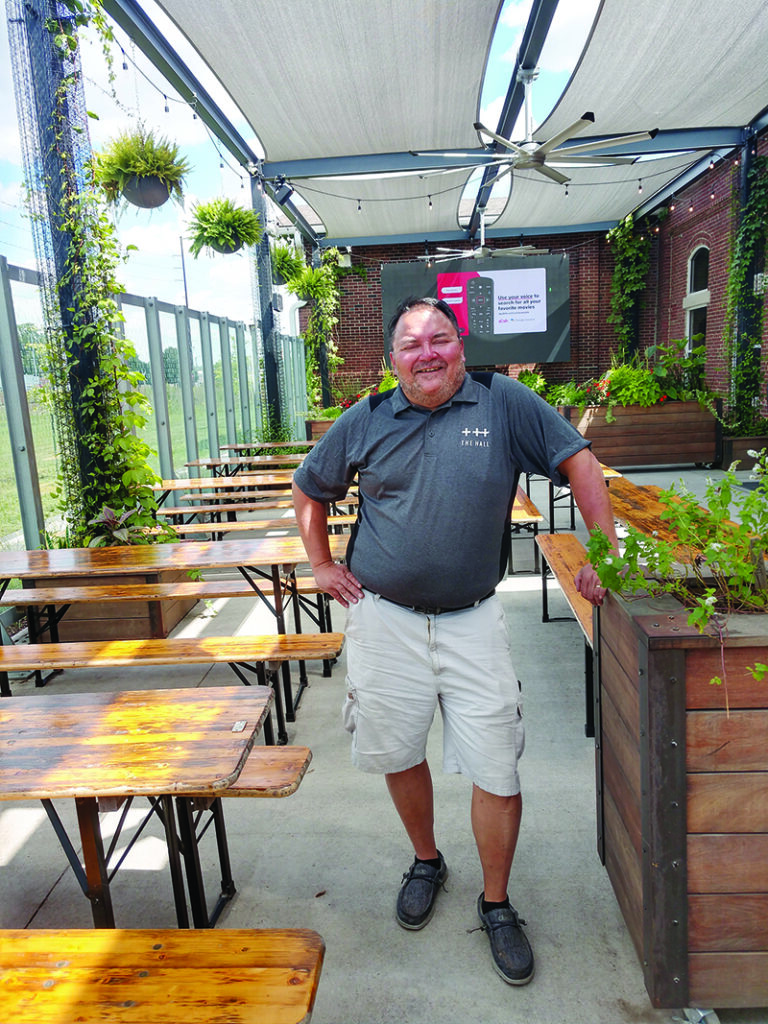 Nick Kuhn is owner of The Hall and founder of The Justice League for Food. The Hall has come out of nowhere to become Iowaâs top retailer of beer for bars. Its food revenue supports the Justice League, a nonprofit organization that has been serving 2,500 free meals a month to two of Polk Countyâs community centers. Their unique business plan linking a profitable business with a nonprofit could be studied in business schools for the next decade. We asked Kuhn to lunch, and he suggested we meet at The Hall.

Kuhn was preparing for bingo night, an every Monday event.

âWe thought maybe 50 would show up on the first night, but we had seven times that many. Trivia nights every Thursday are even bigger. We just had our first âRock Paper Scissorsâ tournament, and it drew a big crowd. Gov. Reynolds came to play, on her own,â Kuhn explained.

What made Kuhn think bingo was a good way to sell beer?

âI grew up in a bingo family in Guelph, in southern Ontario. Bingo is big there and not just in churches. Itâs a two-hour rush here every Monday, and itâs a family activity. We always wanted The Hall to be family friendly,â he said.

So how did this evolve?

âItâs been a wild trip. I retired from the corporate world in 2015. I was running an engineering company in Green Bay. The first stupid thing I did was buy a bar, Overtime in Urbandale. My partner wanted out soon after that, so I went from being a passive investor to an active owner. The next stupid thing I did was add a restaurant to the bar. Then I bought a food truck â 515 Pi. I went to a food truck association meeting and was elected its president within 15 minutes. Zach Mannheimer duped me into that. My first job was to throw a food truck party for 12,000 people at the sculpture park downtown. All that was baptism by fire for what would come next.

âLooking for cheap labor, I went to Central Iowa Shelter Services and hired 10 homeless people to work. One guy left after an hour. Another after two hours, but eight stayed. Afterwards one of them, Bill Ryan, told me he lost $20. I didnât believe him, but I made up the loss. Noticing the kitchen at the food shelter was in bad shape, I offered to bring four food trucks there so they could close the kitchen for cleaning. While on that mission, Bill Ryan taps me on the shoulder and tells me someone found the $20 he dropped and returned it. He said he had been carrying it around for three weeks hoping to see me and return it.

âThat was an enlightening, humbling moment. A homeless guy was hoping to return $20 to me. I went home and told my wife, Lynn, we had to do something to help. That was the first time the homeless ever registered on my radar. We took our food truck to the shelter and offered free meals for two years. I was frustrated, though, because I felt I was just feeding the same faces for two years without helping their lives. As Mathew says, âGive a man a fish, and you feed him for a day. Teach a man to fish, and you feed him for a lifetime.â I asked Lynn, why donât we build a kitchen and give these guys jobs. She said âOK.â

âAs luck would have it, Zach Mannheimer posted a picture of this old railroad building, empty at the time. Jorgen Jensen was looking to develop it. My idea was to build a state-of-the-art, large kitchen as a food truck commissary. The rest just fell in place. Jensen wanted me to take all 25,000 square feet. Lynn said, âLetâs figure out what to do with the rest of it.â She knew that would appeal to the engineer in me.

âI put the kitchen, which cost a million dollars, on hold and opened The Hall to help support the nonprofit mission. Then Angela Connolly called from the Polk County Board of Supervisors. She offered to help build the kitchen if I would let them use it for Hunger Free Polk County. I proposed hiring homeless labor instead. She said I would have to become a nonprofit, so I did. We received tax exempt status in five and a half weeks. It often takes years. So, we had a for-profit supporting a nonprofit.

âPolk County wanted us to raise funds for the rest of the building before paying for the kitchen. Prairie Meadows came through with $100,000. Microsoft, which was working on coming to West Des Moines, loved the business model and contributed $100,000. Hy Vee donated $100,000 in kitchen equipment. Invision Architectural Services donated a contractor. Dallas County Development found us a long-term note to finance over costs. All this funding took place between February and October of 2018,â he explained.

How did Scott Bush and Templeton Rye get involved?

âScott said he had looked at the building but it was way too big. So, we drew up a plan on a napkin at Java Joes, and he was on board.â

How did COVID-19 change things?

âWe decided to automate everything we could. Now all orders and payments are done on our smart phone app. An electronic board tells you when your food order is ready. So, we donât need servers, just bartenders. Cocktails account for a quarter of alcohol sales. Wine about 5 percent. We have big tables, so we need big groups. Not everyone likes beer. We have reduced labor costs to only 4.5%, from 20% before automation. And we donât have to worry about shutting down because of labor shortages.â

âExileâs Ruthie is the top Iowa beer. We sold 19 half barrels of Paulaner Octoberfest Weiss Bier in 24 hours, though. Soft pretzels are the best-selling food, at $13 each. They just pair well with beer. All our food does,â he said.

Also during this time, the Kuhns opened a second kitchen and bar with the same mission at Sun Valley Lake. They will reopen Beerhouse (formerly Overtime) this fall with food sales going to their mission. How on earth did this engineer and his wife figure this all out?

âI learned, particularly during the shutdown, to recognize bread crumbs. Bread crumbs can lead you out of the wilderness, one crumb at time. But you have to be able to see them.â ♦