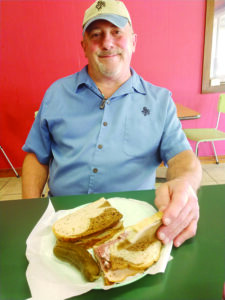 Steve Vasquez is a corporate chef for Hy-Vee and prominent member of the Iowa Blues Society. We asked him to lunch recently, and he chose Maccabeeâs Glatt Kosher Deli. That cafÃ© is celebrating its 30th anniversary of uncommon hospitality provided by Rabbi Yossi Jacobson.

âI always feel like I go there for lunch and leave full of good kosher and life lessons,â explained Vasquez. âOthers have tried to operate a kosher deli, even Hy-Vee tried it. They all give up. People donât just come here for the deli; they come for the kibbitz and friendship,â Jacobson added.

No restaurant owner in town provides as much conversation as the good rabbi. He entertained us with several stories, all filled with life lessons. One began by showing us an obviously counterfeit $100 bill he keeps in his âcommunity fundâ jar. Two intimidating men walked in when the rabbi was alone in the store, attempted to purchase $30 of food with the bill and demanded change. Jacobson offered to give them the food but not the change. Then he thought â$70 is not worth my lifeâ and relented. He put the bill in the jar and people asked about it. As the story got out, others walked in and donated $100. One such donor was a pastor who thought she might know the culprits. â$100 loss led to a $500 gain, thanks to God,â he explained, adding what friends call a Yossism â âAll great lessons in life begin with a confrontation, an abstract event. Make the best of a bad situation, and good things follow. Like Carnegie said, âThe deal begins when you hear the word no,â â he concluded.

Besides being a rare kosher deli in the Midwest, Maccabeeâs is a good source for Israeli wines, which are highly regarded in Europe but not so much in the U.S. Over corned beef and combo meat sandwiches, Vasquez and I talked our shared interests. âGlatt is the highest level of kosher. They even inflate the lungs to check for infections, which would be unkosher,â he said.

Vasquez had been a key player upgrading Hy-Veeâs charcuterie service. Did he know where in the metro one can still buy the extraordinary Royal ham, a Twin Cities product that both The Cheese Shop and select Hy-Veeâs have discontinued?

âItâs owned by Red Table and is cured about a month and smoked. It tastes sweeter than most ham. I think you might have to go the Twin Cities to find it now.â

Vasquez is back at corporate HQ now after about nine months in Winterset. What was that about?

âThe Winterset store lost a bunch of management at the same time. They needed someone to manage the meat department who could cure, grind, cut, etc. Two of us went there for three quarters of a year, and the store was named the best meat department in the chain in two of those quarters,â he explained.

âBest thing about Winterset is the Covered Bridges Winery. Kevin Boyle is the farmer, and Keven Fifo is their winemaker. Fifo is the winemaker of the year in Iowa. I really like their Rattlesnake and Frontenac Blanc,â he said.

Frontenac Blanc is popular in Iowa.

âYeah, and one farm in Compass Hill grows all the grapes for all Iowa wineries,â Vasquez said.

Vasquez is a director on the board of Iowa Blues Society and heads their education programs. What is coming up this year?

âAug. 28, we will have a harmonica giveaway and lesson with Malcom Wells in Riley Park. On Sept. 18, Heath Allen will run a workshop aimed at young students. Scott Davis will host a history of the blues seminar in October. The Blues Society as a whole will host an all Iowa blues challenge in three categories â solo, duo and bands. Winners will go to the International Blues Challenge in Memphis. There will be 260 blues bands there, from Italy, Israel, New Zealand, etc. In 2018, Iowaâs Kevin Burt won that challenge in three categories â best harmonica, best guitar and best solo performer. No one else has ever won in three categories the same year. We will have a Hall of Fame induction late this year and a Valentineâs Day weekend Winter Blues Fest with performers from four bordering states. The third week in April, we will have a weeklong Blues in Schools event with Kevin Burt as Resident Educator. We will have 1,500 students in one week.â

Vazquez travels to other nearby blues towns. How does Des Moines compare?

âKansas City has so many blues clubs that itâs not like Des Moines or Omaha. Des Moines has an amazing talent pool for its population. One thing I have noticed about blues, food and drinks: In all cases, if you produce a great product, you will find customers. Omaha is ahead of other Midwest towns in mixology. They take it so seriously that $55 cocktails sell there. When bartenders measure recipes with graduated cylinders, itâs serious. Omaha is ahead of others in blues education, too. They just have more money to do more things. They have programs where kids audition, take seminars and get report cards.

âHere we have to do things on a budget. âWhere in the World Blues Ambassadors Travelâ is a popular inexpensive program. Each month I interview blues stars and stream a podcast with YouTube uploads of their performances. I share that with 40 other blues groups, and we get around 12,000 hits a month. Iâll have Harlem Lake on soon. They are a young band to watch from Holland. They will travel with Walter Trout next year. Also, weâll have the top two blues bands in the U.K.

âLittle Walter has a song called âBlues with Feeling.â I took off on that with âBlues for Healing.â Weâre doing that with the Iowa VA Hospital. With the therapy department there, we are giving guitars to help vets recover. The Iowa Blues Society has donated 40 guitars to vets. Blues heals the lovesick and down and out, but this program gets these guys through the hard part of the day,â he said.

That would be to what the old bluesmen call âQuittinâ Time.â ♦