Owner of Olson-Larsen adds new gallery to keep young artists in the area. 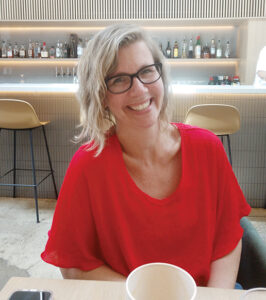 Susan Watts recently passed her personal 10th anniversary as owner of Olson-Larsen Galleries, which was the galleriesâ 46th year and Wattsâ 17th overall. We asked her to lunch, and she chose St. Kilda Collective (SKC) in Valley Junction. Despite only being open since the beginning of the virus rain, this particular St. Kilda now joins Jesseâs Embers and Manhattan Deli as the most requested meeting spots for this column.

SKC is a full-service bakery open seven days a week. It contains an open kitchen with a wood fired grill that delivers enticing aromas throughout the handsomely renovated former car dealership. It also has an attached 1,200-square-foot event room that brings in new future customers.

âBeing an art dealer, I love the renovation. Itâs gorgeous. Those of us in Valley Junction needed something spectacular to anchor the north end of the district. This does that,â Watts said.

Despite persistent rumors to the contrary, Watts is not selling her gallery.

âItâs definitely not for sale. We have made considerable plans for going forward. We recently added a new gallery, too,â she said.

How does the new gallery fit in with the old one?

âItâs only a block away, at Fourth and Maple. We call it OL Guild, and it gives us a showcase to try out new artists. Thatâs a big deal because, after 46 years, we need to rejuvenate. We give an artist complete control at the guild. We give them a key, provide a ladder and turn them loose. We get a feel for their process that way. We did have Lee Emma Running do an installation in conjunction with a show at the main gallery, but, for the most part, the OLG is a place for art that doesnât quite fit in the galleries.

âWe are a for-profit gallery, but we also have a mission to keep young artists in the area. This is a space for that. Currently we have a show there by Cameron Gray. He is a recent graduate from Iowa State design school, and his work concerns social justice particularly for Southern blacks. This is important art we want to support, but is it marketable? We will see. The OLG brings in a new crowd, and itâs a younger crowd,â Watts explained.

âSingle-theme exhibitions. We have done them before, but we will do many more. And we definitely are looking for more younger artists,â she replied.

Does Olson-Larsen still represent any of their original artists?

âAmy Worthen. She might be the only one. Peter Feldstein might have been an original, too. We picked up several artists, like Byron Burford, a little later, when Percival Gallery closed,â she mused.

A decade or so ago, I was told that Gary Bowling was the galleriesâ most popular artist. Is that still the case?

âIt could be. I am not sure. His paintings of colorful landscapes are definitely appreciated. He is represented by other galleries, from Phoenix to Chicago, so his reputation is widespread. Ellen Wagener is another landscape painter with a large geographic audience. She moved from northeast Iowa to the American southwest. She revisits sites like Monet did, catching what changes there.

âLaura Berman is a nomadic Kansas City printmaker from Barcelona. She has been with us about four years, and the response has been big. Her colorful prints are particularly appreciated by other printmakers. Thatâs because her process and technique are so complex. She basically layers colors into abstract monoprints.  Jeanine Coupe Ryding is another nomad who is much appreciated for her wood cut prints.

âMolly Wood has been with us maybe four or five years, and she is one of the rare photographers who sell well here. Her work uses botanicals, particularly flowers, as symbols of human life cycles and events. They are exceptional. She lives here in Des Moines, too. Tilly Woodward of Grinnell does similar subjects, except she is a hyper-realistic painter. She has a lot of fans. Debra Smith has a big following.  She is a Kansas City artist who builds quilts from recycled materials. Her early work was all about recycling the linings from antique Japanese kimonos.

âPaula Schuette Kraemer is another very popular artist. Her prints run from whimsical to dead serious, and they all do well. Doug Shelton is a Des Moines guy who lives in the Southwest now, but his paintings of the Iowa State Fair are a big draw. To answer your question, itâs just impossible to say who is the most popular. They all are by different measures,â Watts concluded.

Interns are a boon to art galleries and museums everywhere. Where would Watts encourage a young intern to travel for art experiences?

âI love Kansas City, Minneapolis and Omaha. In the Kansas City crossroads district, my favorite gallery is Weinberger Fine Arts. In the Twin Cities, it is Groveland, which is marvelous in its own right architecturally. In the Old Market of Omaha, Iâd recommend Anderson Obrien. We share several artists with them. Within Iowa, the ICON Gallery in Fairfield is exceptional. I love the Gilded Pear in Cedar Rapids. They specialize in jewelry but show some interesting wall art, too. The Octagon in Ames is a good gallery. I donât get to Iowa City as often as I should, but the Hudson River Gallery in Coralville is exceptional,â she advised.

âAlmost everything Valley Junction does brings us a crowd. We had a small art fest here in June, and we were swamped. The big art fest downtown brings us a lot of out-of-towners. So did the National Quilting Convention.â

Was the viral storm a hard time for art galleries?

âYes, but the hardest thing to deal with has been the Internet galleries. They are more convenient and a time-saver for interior designers and such. There were some good things about the COVID. Midwest people like to work with other Midwest people, and they really stepped up during the hard times. There is a certain trust there. One of the most important things Marlene (former owner Olson) taught me was to ânever give anyone an excuse to not work with you.â I think that speaks to an implied trust and honesty,â she explained. ♦