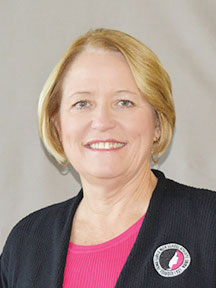 Jean Berger is the executive director on the Iowa Girlsâ High School Athletic Union, the only sports organization in America dedicated to girlsâ sports, plus speech and music competitions. She is the first-ever female director of the organization that has roots more than a century deep.

We asked her to lunch recently, and she chose Jethroâs BBQ and Bacon in West Des Moines. Over brisket and salads, we discussed the sporting scene for women in Iowa.

âI have not been out much since the COVID began, but I love Jethroâs. The owner, Bruce Gerleman, also owns Splash, and we have our post basketball tournament party there, for workers and our board of directors. They really put out a spread there. Also, our fastest-growing event, in conjunction with the basketball tourney, is the Jethroâs chicken-wing-eating contest. Fans love it. Itâs a series of four one-on-one wing-eating contests held on the floor during the quarterfinals. The competing basketball schools choose contestants, and people love it. This year we had a returning champion competing again for the first time,â she explained.

Berger was the first Drake womenâs athletics director and has solid ties to the Bulldog program. How did the case of Jennie Baranczak, who left Drake last month to take over the Oklahoma program, affect Berger?

âI was devastated, but I was devastated when Lisa Bluder left for Iowa over two decades ago. I know that Jennie turned down several jobs that would be considered an upgrade from Drake. This one was just too good of an opportunity. Oklahoma has been to three Final Fours under (outgoing coach) Sherri Coale. She had less experience when she was hired than Jennie has now. I know itâs really tough to compete with Texas, and all their money, and now with Baylor, but it can be done. Also, for all her success in the regular season, Jennie never won in the NCAA tournament. That was frustrating. Maybe she thought she had a roadblock at Drake,â she said.

Loyola menâs coach Porter Moser moved to Oklahoma a week or so before Baranczak. He mentioned that the âall for one and one for allâ attitude at the OU athletic department was enticing. When a perennial national football power coach helps recruit for other sports, people notice.

âYes, in Lisa Bluderâs first season at Iowa, she was impressed with the interaction that (Iowa football coach) Kirk Ferentz initiated with the womenâs basketball program. That kind of thing is rare, and since Bluder and Ferentz are both in their third decades there now, it must work well for everyone,â Berger said.

Kaitlyn Clark is a Dowling Catholic graduate who led the nation in scoring this year as a freshman at Iowa. How good is she?

âShe is very special. Lisa (Bluder) reigns in freshmen, even sophomores. Yet she was letting Kaitlyn throw up 40 shots in a game, from all over the floor, from the get-go. Lisa has always insisted that defense wins and comes first. Yet, this year, her team was scoring 90 points a game. Thatâs how special Kaitlyn is,â she replied.

Is she the best Iowa woman ever?

âI canât answer that. Jan Jensen (Elk Horn-Kimballton, Drake player who also led the NCAA in scoring) was pretty good. I will say this though, Kaitlynâs personality is infectious. She is one of the funniest players I ever knew. And she really rose to the occasion in the clutch,â Berger admitted.

Clark was frequently compared to Connecticut guard Paige Bueckers (who grew up next door to this writerâs daughter in the Twin Cities). The Wall Street Journal wrote a column about the meeting of the two (who are friends from their time playing together for USA age group teams) in the NCAA tourney, calling it the most interesting game of the week, menâs or womenâs. Bueckers won more big awards than Clark, but Clark put up better numbers. Did Kaitlyn get robbed?

âBueckers was not up to the moment in the Final Four. I think Kaitlyn showed more poise and maturity,â she said.

There have been grumblings that the NCAA has disrespected womenâs sports this year.

âI canât believe they tried to minimalize volleyball right after the criticism they took for the way women and men were treated in the basketball tourneys this year. They reduced the number of volleyball teams from 64 to 48 and decided to play it all in a convention center instead of the Century Link arena. They also announced that games would only be streamed and without talent (industry speak for no announcers). The backlash was so severe that ESPN said they would televise the games with talent.â

The IGHSAU was the first organization in the country to resume high school sports last year after COVID-break. How tough was that decision?

âI couldnât sleep for months. We went back and forth and tried to consider everyoneâs perspective. But softball is played outdoors and is so big a part of the fabric of life in smaller communities that we went for it, and it worked out pretty well. Some teams shut down after tests were positive, and Des Moines schools opted out, but it was successful overall,â she recalled.

What personal tenets does Berger bring to her job?

âI am a traditionalist. Tradition matters to everyone who played. The six-girl game still has a special place in Iowa hearts. Iowa Public Broadcasting received scathing letters for cutting away from a six-girl exhibition recently. I insist on pink roses, not red, for the winning players. And pink carpet not red. Pink T-shirts are only available to the champions. They are so popular that teams show up at city council meetings wearing them. We brought back the Hall of Fame, and we have a 50-year brunch now for the champions of half a century ago. You have to stay in touch with the past,â she said. ♦