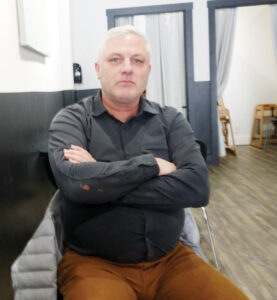 Joe Logsdon is owner of the French-style bakery and cafÃ© La Mie. He is part of a local restaurant family that also includes his brother Steve (Lucca) and nephew Andy (Basil Prosperi). I asked him to lunch recently, and he picked La Mie since he was working that day. We ordered in the bakery and moved down two doors south to a new La Mie annex, a comfortable room that allows more social distancing than the main bay. Over coffee and croissants (it was too late for Joeâs favorite green quinoa), we talked about the state of the restaurant art in the year of the viral nastiness.

How did Joe get into baking without family connections in the business?

âI was living in Chicago right around 1990. That was before I was aware of any of the cable television channels that educated America about international things like French baking. I would go to Taylor Street on weekends, and it was a totally eye-opening experience. There was so much there that was new to me. I came back to Des Moines and talked my brother Steve into starting a place. At that time, Chuck Fuller was doing new things and Mike Lavalle, too. Those guys were the inspiration to try something different.

âI also went to Minneapolis to the National Baking Institute and to a patisserie in Chicago. One of my teachers at the National Institute was the fourth generation of his family in the bakery/cafÃ© business in Alsace. He was within one block of everything he needed provisionally, four stores in all. Things are quite different here, so we do things differently. Itâs necessary. Making money doing things small and simple is a real challenge in the U.S.

âHigh quality food is usually a privilege for the rich in the U.S. We want to be a place for everyone, so we use what is readily available and affordable. For instance, I have people who donât understand why I donât use French butter. Itâs too expensive. I could not sell a croissant for $2.25. I am more down to earth than that.â

Why would he expand during the virus?

âThe space was available, likely because of the virus. Plus, I was experiencing long lines that lasted three hours on Saturdays. Somewhere in there, the virus became political. At least people began taking it as seriously as politics. Some folks would get angry about being asked to wear a mask, and others would get mad about people in line not standing far enough apart. Half my customers were shutting in, and another large percentage didnât change behavior at all. I think the new space allows people to feel more comfortable. Itâs very second hand, and that suits what I want to be. The furniture is second hand; that helps keep prices down,â he explained.

How bad has the virus been for La Mie?

âSales are off 70 percent overall. The worst is downtown where the work force has dropped from 12,000 people within a two-minute walk of La Mie Express. When will it be back to 3,000, and will it ever return to 12,000? Roosevelt business isnât as bad. Itâs down 50 percent. COVID means you never know how busy you will be. My business is not cut out for delivery services. One time I refused to give a food order to a delivery guy because he refused to wear a mask. If heâs serving my food, he is representing my business. The service sent a different guy who would wear a mask,â he said.

âI really donât think anyone knows what will stick. A lot of people want to continue working at home. A lot of businesses want all their employees back in the offices. Des Moines is different from Chicago. People here donât have to live downtown. They do it because they can and they want to. So, I think there will be different models going forward for big cities and cities our size.

âThings are already changing drastically in some places. Look at Hy-Vee. They went from laying off big numbers to now, when they are hiring 11,000 new employees. People are all over the place with expectations now. One afternoon there was a blizzard so bad I sent everyone home early. As I am closing, someone calls and asks to order a coffee and roll for pick up,â he laughed.

What is the hardest thing to make at La Mie?

âI love that question. I always answer âeggs.â That astounds a lot of people, but what I mean is that there are so many different ways that people want their eggs cooked â boiled, poached, fried, over easy, casserole, baked, scrambled, omelets, etc. â plus some people want them soft and others hard and others medium. There is no way to systemize eggs, unless you serve them all the same like fast food does.

âThe most challenging thing we make is the simple croissant. Each one is a 25-step process that takes two full days. Lamination (the layering of dough and butter by repeated rolling and folding) is not easy, and I want to sell them for less than two and a half dollars, with quality jellies. Simple isnât as simple as it looks sometimes,â he said.

What has travel taught him?

âYou use what is in your backyard. In Germany, the flour all has a higher gluten structure, and itâs common to use margarine rather than butter. We went to Mexico City last year. I wanted to experience the culture of many employees up close. I think itâs odd how many people leave the culture behind after a trip. They wear leis and Hawaiian shirts there but not afterwards. It takes a long time for people to embrace a new food. Pho and sushi did not happen overnight in Des Moines; it took decades,â he recalled.

âI still think there is a place for cafeterias and family style, big table dining like the Amanas used to be so famous for.â

What is best about the business?

âRelationships you make doing business. I feel so good knowing I have employees who have been with me 10 years or more and now have the American dream of owning a house and raising a family.â ♦