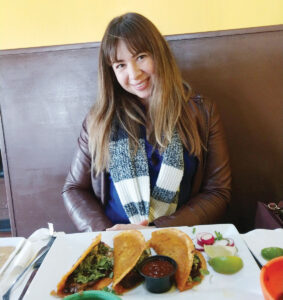 Fabiola Shirrmeister says she connects newcomers with the services they need like business grants and loans and also assists with language learning.

Fabiola Shirrmeister is a Sonoran-born-and-raised media producer/host who came to Des Moines six years ago after working for Spanish language media mega nova Telemundo in Puerto Rico and for Azteca America in Tucson. After working for Latino Iowa radio, she is embarking on a new career self-producing video content for her own streaming media. I asked her to lunch recently, and she suggested El Fogon, a Mexican cafÃ© on Eighth Street in West Des Moines.

âI love this place. They make everything â even tortillas â fresh and from scratch. Their barbacoa reminds me of Sonora-style barbacoa more than other places. Itâs made with beef, not lamb like at La Familia, which is also fabulous, and heavily sauced. Their rusa lemonade is unique. Itâs a lemonade with sparkling water. They do fabulous mocajetes, steaks and nopales, too,â she said, ordering barbacoa tacos and rusa limonada. I ordered a combo plate with chile relleno, enchilada, frijoles and rice.

Sonora provided most of the early 20th century Mexican immigrants to Des Moines.

âYes, I am aware. I heard that most all Mexican restaurants here used to be Sonoran. Now there are hardly any left. In Sonora, quality of meat is everything. Since I grew up there, itâs important to me, too. In Sonora we have the Sea of Cortez, so seafood is abundant and fresh. Thatâs why I like Panka, a Peruvian cafÃ© on Ingersoll. Seafood is a big part of their menu and reminds me of Sonora,â she said.

One of Shirrmeisterâs first new ventures is a series on the best places to eat in Iowa. What are a few of the restaurants she plans to feature?

âMy very first video is about Russia Night at Irinaâs. It should be online by the time this is published. (www.facebook.com/fabiolasoficial) Because it is my first, I took a long time editing. I wonât have that luxury in the future.

âIrina embodies the immigrant experience so well. She and Dmitri were so determined to find the American dream that they spent years in hardship but persevered and finally realized their dream here. Their restaurant is also fabulous, serving both Russian and American food.

âIrina and I are both interested in connecting different local businesses that are off the mainstream. Prairie Natural is a national food distributor with butcher shop and office in West Des Moines. They provide meat and seafood that is all naturally raised, mostly grass-fed meat wise, and antibiotic free. They have beef, lamb, goat, veal, seafood, wild game, duck, rabbit and pork. A lot is sourced from South America and Australia. Scallops are from Peru. I totally believe this is a business that is worth supporting, and Irina does, too,â she said.

What are some of Shirrmeisterâs other favorite local places to eat?

âEl Coqui. Thatâs a food truck that parks on University just east of MLK. It has really good Puerto Rican food. I miss Puerto Rican food a lot, particularly mofongo (plantain patties with chicharron and garlic), and this truck makes the best mofongo. They also make their tamales with banana leaves instead of corn husks. I like both but miss these more in Des Moines. I also really like the Wasabi restaurants. They really have the best fish. I love Barntown; itâs a pub in Waukee or West Des Moines with fabulous food. Everything is scratch made (even house brined pastrami), and they do things like mac and cheese and waffles and fried chicken that are hard to make at home.

âBecause I am from Sonora, where meat is everything, I love Rubeâs Steakhouse. They raise their own beef, and itâs fun to cook it yourself. I like Mi Patria, the Ecuadoran restaurant, and Ceviche, the Cuban place. They make the best Cubano sandwiches. El Guapo is another favorite. Like me, they are eager to promote and connect with other local businesses â like Reyesâ Tamales,â she said.

The holiday season is a huge thing in Latino culture and is more connected with foods there than here. What foods figure in Fabiolaâs holidays?

âItâs a two-and-a-half-month period of eating. Sopes, sopas, tamales and posadas are serious holiday foods. There are posada parties that include pinatas and something like caroling. People go to other homes and sing outdoors until invited in for food, or at least for champurrado â thatâs a hot chocolate beverage that includes corn flour that makes it thicker. Our holiday season lasts till Candelaria. That goes back to the fourth century in Tenerife. Itâs celebrated in Mexico, Central America and Puerto Rico. Itâs Feb. 2, and only then do the holidays end,â she explained.

The âBest Places to Eat in Iowaâ is not her only new show. What is the other?

âItâs called âLetâs Talk with Fabiola,â and itâs intended as a platform to perform, provide resources and educate about different topics that are relevant to Latinos, particularly those new to the community. Health news, civic engagement, financial resources, education news, English language opportunities, plus international news. Those things are important to newcomers and hard to find,â she said.

Your Facebook profile says you reach 6.6 thousand people with live videos and 176,000 overall. That has to be encouraging.

âI believe that social media is the future, at least my future. I can engage people two ways, connecting them with the services they need like business grants and loans, second language learning. Itâs hard enough to come to a new country, but doing it without knowing the local language is terrifying. Political systems and social systems are totally different, too. Financial systems are, too.

âItâs important to me to help newcomers build bridges to the local community. When they isolate in their own subculture, itâs bad for everyone. And there is much to offer here in Iowa. There is work, plenty of work. But without language skills or people to advocate for you, the path to success is slower and harder,â she concluded. ♦