Sarah Grant at Eatery A 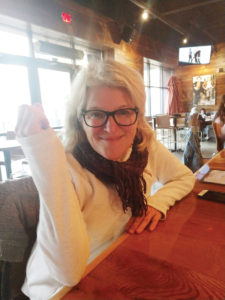 Sarah Grant has been the greatest influence on Des Moinesâ art scene gaining national significance in the last three decades. A significant artist in her own right, her biggest contribution to the local art scene has been entrepreneurial. The business she founded, Sticks, has provided well-paying day jobs for some 1,000 creative people. In my opinion, thatâs more than all the government programs the state and city have created to make Des Moines a magnet for such folks.

I asked her to lunch recently, and we found our way to Eatery A, which is now open for lunch for the first time since opening. Ironically, her first choice was Noahâs, but they had cut back lunch service. Eatery A greeted us with bar codes instead of menus. Sarah told the server âMaybe you donât know this, but neither one of us is under 25.â After being frustrated trying to make our cell phones service the bar code menu, he provided paper menus. That option needs to endure.

Over Chardonnay and fantastic celery soup, flavored with salsa verde and an oil drizzle that tasted like cilantro or parsley, we discussed the last half century.

Did Grant know that she wanted to be a painter and/or an entrepreneur growing up?

âThere were hints, but not really. I grew up in Ames, which was a fantastic place to grow up because of the university. My father was an orthopedic surgeon, so my parents had lots of friends in the university faculty. I felt like I was exposed to great ideas all the time. More than anything, VEISHA (the wind-grieved celebration of spring) did that for me. I would go from booth to booth and see amazing ideas that creative people were hoping to turn into businesses.

âBut at the time, when I got serious about life choices, I wanted to be an actor. A guidance counselor told me to forget it because I was too short. I think he was just trying to save me. Lady Gaga is 2 inches shorter than I am. Between VEISHA and my parentsâ friends, I was surrounded by people who longed to create something. My dadâs best friend grew sorghum in his basement. I always knew I wanted to create and discover,â she said.

What was the next stop?

When I gave up the acting idea, my father suggested I had a mind equipped for the problems of engineering. I was lousy at math, and engineering meant driving a train to me. Art really was a default career choice. I needed to leave home, and my parents did not want me going to Iowa City, so I went to Colorado State. Part of that was because I wanted to ski, but the art department there was full of people from the U of Iowa. After undergraduate, I went to Iowa for my MFA.

âI had been told I could never be a painter, so I got into drawing and printmaking under Mauricio Lasansky and Grace Myers. I learned to love the line and to tell stories, rather than just to observe and draw. I loved intaglio until I got tired of having black fingers. I then asked to join the painting department and was accepted. The line drawing has always been an influence on my painting,â she explained.

What happened after she earned her MFA?

âI got married, moved to Des Moines and opened a studio downtown. In my first year, I won the Des Moines Art Centerâs âbest in showâ in their (now long gone) Iowa Artists competition. Olson-Larsen Gallery picked me up, and I was with them for 35 years,â Grant said.

How did this lead to Sticks, an international company?

âMeredith (Corporation) asked me to create a nativity. I did many and they selected one, and I lost the copyright to them. But I had several nativities that they didnât want. My mom wanted one, then her friends wanted them. I soon graduated to Santa and the reindeer. I branched out to a mirror, and Mom said âtables.â That was it. I had found some wood-burned boxes on an antique trip and had incorporated that into my first wood art, painting between the wood-burned lines.

âI went to my first trade show, in Baltimore, with my tables. It was a huge show, and, on my fatherâs advice, I insisted on a deposit and a minimum order. The first two days I heard things like, âWho are you, you are from Iowa and you want deposits and minimum orders?â The third day, those same buyers came back and lined up. They told me that they had decided that my demand for minimum orders convinced them I was serious,â she continued.

So, Sticks evolved from one trade show?

âYes. That was in January. I had $7,500 in orders, and everyone wanted delivery in March. I had to hire help. I did, and I learned that the process was what excited me. I could conceive an idea, turn it over to others for execution and move on to the next conception. I knew enough even then to know you have to work quick and respect time, or you would never make money,â Grant recalled.

âMy young staff was afraid to propose it to me, but I loved it. Thatâs why I hire young minds. We have the handmade line and now another, less expensive, line called Sincerely Sticks. It has not hurt the handmade business at all.â

âI have been relieved of all management duties at Sticks. My daughter runs all that now with her team. I am free to paint and teach my grandson in the era of virtual education. TJ Moberg is my new gallery, and he honored me by leaving me free to do what I wanted â big canvasses. I am so short, I have to use ladders to paint now,â she said.

What works that people can see is she most proud of?

âTake the tour of my architectural installations at Iowa State. Thereâs one of every degree offered,â she replied.

Any advice to young artists?

âLearn to adjust to new things. Moving on is the most inspirational thing about being an artist.â ♦