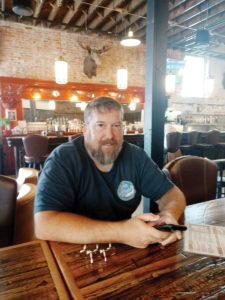 Jeff Bruning is a partner in Full Court Press, a gang of friends and entrepreneurs who open restaurants from conception to sizzle and serve. We asked him to lunch recently, and he chose Lucky Horse Beer & Burgers, the 15th restaurant in the groupâs repertoire, not counting a couple they have closed or sold.

Lucky Horse occupies a charming building built in 1887, just six years after the great Iowa swashbuckler Francis Marion Drake bought an Oskaloosa college and moved it to the wilderness northwest of Des Moines. The building is a diamond in the crown of the (Drake) Neighborhood Development Corporation. That red hot group spent some $700,000 refurbishing the building, which also now houses the corporationâs office.

The restaurant sets a new fashion template for Full Court Press, known for stunning restorations and value-based dining. Moose and buffalo heads are mounted above six large screen televisions and 24 tap handles. The bar was transported from its previous lives in Toledo, Iowa. It has purse hooks and Gladiator bar stools, the most comfortable and a trademark of Full Court Press.

âThis was the easiest place we have ever opened. The Neighborhood Development group had left very little to do. The floor had been rebuilt and leveled. This space had been two separate bays with different floor heights. All we had to do was lay tiles, which are replicas of the buildingâs drug store tiles. (It had been Putman Pharmacy in a previous incarnation). They had even installed a grease trap,â Bruning said.

The space was employed by Music Circuit and Crazy Horse Guitars between Putmanâs and Lucky Horse. Music on my visits was easy listening oldies, from reggae to light rock. Large wooden booth backs have been installed.

âThey separate the booths so that we can use them all instead of every other one. We are going to add them to other properties. We are also expanding patios as they are exceptionally popular in the current pandemic. Our patio at Ritaâs Cantina is so busy that we are building a bigger patio next door at Trumanâs,â he revealed.

What are the busiest stores in the group?

Does The Chicken use the same fried chicken recipe as the popular one at High Life Lounge?

âYes. The two places are so far apart that thereâs no way they could cannibalize each other. Itâs the old fashioned broasted chicken.â

Full Court Press has opened just short of 20 restaurants and only in the case of Fongâs Pizza have they repeated a concept. Thatâs rare, so whatâs it all about?

âWe are in business for two reasons: to make money and to do what keeps our interest. For years all our places were within four blocks of each other. Then 10 blocks. You canât market the same thing in that small of an area without cannibalization.

âAt one time there were eight Hockenberg cafÃ©s downtown with the same menu. Now there are none. Even Starbucks is closing stores too close to each other. And independent coffee houses are no longer afraid of them,â he said.

What has changed since Hessen Haus began the adventure?

âSerious foodies wonât like this, but itâs become much easier to access good prepared foods. We made our own bloody mary mix for years. It was as good as the bartender making it, sometimes fabulous, sometimes not. Now we buy our bloody mary mix from Mark Gannon, the old Hawkeye basketball star. His Hair of the Dog company makes a great product, and itâs always the same. In fact, a place using it won CITYVIEWâs Best of Des Moines contest,â Bruning said.

Because so many of Full Court Pressâ restaurants are set in restored historic buildings, is there a challenge to keep menus authentic?

âI really hate the word authentic. It has no meaning beyond any individualâs idea about what it ought to be. Whatâs more important to us is providing a food experience that is affordable. That takes a mix of scratch made and more convenient foods.

âI believe that most people crave both adventure and familiarity. One memorable experience for me was eating at McDonaldâs in Moscow. They are so consistent that it reminded me about what I missed in Russia. Sometimes it works the other way around. We lost our supplier for Reuben rolls and had to start making our own. They are better,â he said.

How different are typical foods from one Full Court Press cafÃ© to another?

âOnion rings are different at each place. At Hessen Haus, we have always served thick half-pound burger patties. Here at Lucky Horse, we use two quarter-pound patties to get more surface sear and flavor. That cuts the cooking time, too. We also use different buns. People usually prefer one or the other. Bait Shop and High Life Lounge shared the same kitchen, yet some people thought the food was better at one place than the other. It all depends on a single individualâs experience,â Bruning said.

âYes. We have a curried chick pea and a black bean burger here, plus a salmon burger,â he replied.

What is his personal favorite burger?

Why does he think vegans and vegetarians want to eat foods that emulate meat?

âHumans are genetically engineered to eat meat. Those who survived the ancient wild were meat-eating hunters. Vegetarian burgers appeal to psychological and intellectual needs, but the older parts of the brain crave meat.â

Full Court Press holds the Midwest record for most tap handles, 262 at El Bait Shop. There are 24 here. Is that multi beer trend over?

âIt is for us. We opened Fongâs in Ankeny with way too many handles. Itâs more economical to use fewer and larger kegs. Plus, cleaning 262 lines is too labor intensive,â he said.

What are Bruningâs favorite restaurants he does not own?

âI love Tacos La Familia on Sixth and Centroâs pizza. I like Fernandoâs here in Dogtown,â he said. ♦