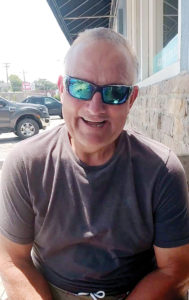 After nearly 30 years in the employee benefits business, Steve Flood retired from Holmes Murphy at age 57. Reflecting on his career, he said, âI have embraced our companyâs two major goals. The first was to help our business partners attract, retain and retire the most productive workforce in the country. The second goal is to help Iowa become the healthiest and most productive state in the nation.â

Flood was a key player in starting and growing Holmes Murphyâs benefit practice from less than a million dollars in revenue to more than 50 million in his time at Holmes Murphy. We asked him to lunch recently, and he chose Sakari, a handsome sushi cafÃ© on Ingersoll with both indoor and outdoor seating. Our temperatures were taken on entering, and menus were pulled up on our cell phones to reduce tactile practices.

I started by asking Flood about retiring at age 57, a considerable accomplishment for a father of four with a divorce behind him. Did he plan that for a while?

âOh, yes. Itâs encouraged at Holmes Murphy. Duke Reichardt was even younger when he retired. The company had 35 employees when I started and about 1,300 when I quit. Revenue grew from $5-6 million to $130-140 million.

âIn order to grow like that and to recruit top young talent, you need to empower the younger workers. Otherwise theyâre like a teenage driver afraid to take chances with parents in the back seat. Young guys want to lead, so older guys need to get out. We are in our fourth generation of leadership. If the current youngest generation wants to change something, even something as minor as using paper coffee cups instead of Styrofoam, somebody will be upset and come to the older generation to complain. That doesnât work. Sometimes you have what I call âquit and stay guysâ who retire but keep coming in to the office. Thatâs not me,â he said.

How does he explain the growth of the company?

âI like to say years in insurance are like dog years. Things change so fast, things like regulations and government interference. If you donât maintain the resources to deal with the changes, you are at a disadvantage. We always had the resources to keep up with the changes. That was a huge advantage over the smaller companies. Thatâs also why so many smaller companies are consolidating now,â he explained.

So, how is Flood enjoying his new life?

âI have time now to do things I always loved but didnât have time to enjoy thoroughly. I finally have time to spend more with my two oldest girls. Betsy lives back in Des Moines now. And I have a grandson with another on the way. Katie still lives in Washington state, but I see her more, too. My third daughter is a junior at Colorado State, and my youngest just graduated from high school,â he relayed.

Betsy and Katie were both world-class distance runners. What was it like having such motivated athletes growing up in the house?

âIt was great. I think I was blessed to have four girls. I really worry that I might have pushed too hard on a son and made him lose interest. But the older girls were self-motivated. The younger two might have had just as much talent, but they didnât want to do the hard work they saw their sisters put in.

âTo be a national champion distance runner, like they were, you never have a break. Cross country season ends, and then winter track begins. When it ends, itâs time for spring track. Then comes the club and international summer season. Itâs like having one scholarship for three sports. But I was blessed that they were so good they both had full rides to college. I never spent a dime on the college educations.

What else is Flood doing with retirement?

âPassions I now have time to indulge, particularly fly fishing. I go to Montana and Alaska now. Those are the best states by far. I also love going down to Argentina to fly fish in Patagonia. I am not much of a big city guy. I will spend one night in Buenos Aires, and I am off to Patagonia. I just feel so much more comfortable in the fishing land than the city. People are so much more laid back. I also like to go salt water fly fishing, mostly in the Bahamas for tarpon and bonefish,â he said.

âI am a very outspoken guy, and I had to bite my tongue when I worked for the company. Not anymore. When I think the First Amendment is being trampled by censorship, now I say so. I really worry that young people today are too privileged to even see the dangers of control.

âWorkers in coal mines and meat packing plants donât have much choice whether they want to work or not. And the virus is not their biggest risk; more dangerous stuff is going on for them every day. Privileged people are free to stay home and not work, but why do they insist on telling me to do the same thing? Itâs a control thing. The more aspects of life you let others control, the more you jeopardize your human and Constitutional rights.

âI get really worried when I hear about workers who wonât go back to work because they make more money on unemployment. Without incentives to work, things fall apart,â Flood said.

âI advise people to be as inefficient as possible. I used to make a list every night of what I had to get done the next day. Now, if I need to make three trips to the hardware store on the same day, I do. I walk to the bank now and listen to audio books, mostly history. People who donât study history donât realize that itâs easier for people to do bad than good. Almost all the bad things that ever happened to me were my own fault. Itâs negative to try to blame anything or anyone else.â ♦