Alice Meyer at Grounds for Celebration 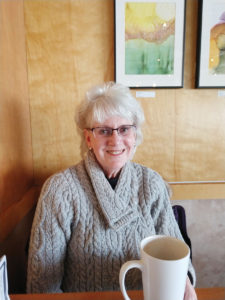 Alice Meyer is the owner of Beaverdale Books, the only remaining independent new book dealer in the metro. We asked her to lunch recently, and she chose Grounds for Celebration in Beaverdale. I couldnât help smiling at the choice. In the 1998 movie âYouâve Got Mail,â Meg Ryan plays a small independent book store owner who is struggling to survive competing against the mega box chain stores like Barnes and Noble and Borders. In the movie, though, the Ryan character hangs out at a Starbucks, a mega chain that was surely putting pressure on small indie coffee shops.

âI didnât even remember that. I just like supporting my neighbors. This is a wonderful coffeeshop, and it seems to be busy any time of day or night,â Meyer said.

What is more difficult to compete with, the Barnes and Nobles or the Internet providers like Amazon?

âI would have to say the Internet. Amazon can cut prices to less than I pay my publishers. I have to count on customers who are willing to pay full price and provide services that are unique to small stores like us. We also can prevent customers from having packages stolen off their porches. I must admit, though, that I adored the original Borders. I lived in Ann Arbor when it was in its prime, and it was a magical place. Such a pity when it went under,â she added.

Borders opened in Ann Arbor in 1971 and closed in 2011. In its final year, it operated 511 stores in the U.S. plus others in the United Kingdom, Australia, New Zealand and Singapore and employed nearly 20,000 people. They also operated Waldenbooks. Barnes and Nobel bought their customer lists and trademarks.

âBarnes and Nobel must succeed. It was so sad when Borders closed. The job losses were tragic. There is a new independent in Ann Arbor, Literati. Itâs 5 years old and good for morale. They were chosen Publisher Weeklyâs Store of the Year. Their brand is an old manual typewriter. People come and use it to leave messages. Some of those get published,â she added.

Does she have a favorite book store in Iowa?

What is the state of the bookselling business?

âItâs definitely coming back. A few years ago, we were down to 1,600 independent stores nationally. Itâs up to 2,500 now. The last few years, I could finally afford to hire a full-time manager. He does the book buying so I can spend my time in the back of the store with QuickBooks,â Meyer said.

Is Beaverdale key to her success?

âProbably. I have lived here for 30 years and only wanted a store here. It took two years to find an opening in Beaverdale. My kids went to Rice, Meredith and Hoover. Itâs completely walkable. We have Price Chopper, lots of good restaurants, retail, hardware. I have been open 16 years now,â she said.

What does a small indie need to do to compete?

âItâs all about service. We hold 100 readings a year. Did 10 in February alone. We support local writers. The area next to the front door is all local writers. We carry 500 of them, all on consignment. Love supporting them. I think that a book store must be a happy place. People love to be there. Tonight we are hosting a launch for a new childrenâs book. I love to see people talk to each other in the store. Bookstores need to reflect their community. Even the new CEO of Barnes and Noble, he came from Waterstoneâs in Great Britain, says the new mission for the company is to reflect each different community. Book stores are giving places. We share too much. You have to be a caring person to be in this business,â Meyer said.

âAmerican Book Sellers. They have annual conferences. I go whenever they are held somewhere I can drive. I wonât go to Baltimore this year but will go to Memphis next year,â she said.

âOh, yes. We have a Classics Club, a Childrenâs Club, a Fiction Club, a Cook Book Club and a History Club. All meet monthly. They help us get to know the customer. Thatâs essential since they come in often enough,â Meyer answered.

How are books published. Does the paperback come out the same time as the hard bound?

âUsually the paperback is released a year later. It depends on whether the hard bound is still selling. âFifty Shades of Greyâ was different; it launched as a paperback,â she said.

What are some popular local books?

âVicki Ingrahamâs âThe Younkers Book.â People are nostalgic for the old department store. Wini Moranvilleâs âLittle Womenâs Cookbookâ is doing well. She really had to work on making the old recipes modern enough to be viable. I always liked her âBonne Femme Cookbook,â too. Sheâll be in the Des Moines Book Festival next month,â Meyer related.

What indices are helpful in the business?

âThere is nothing like the New York Times Best Seller list. Right now âAmerican Dirtâ is huge. Jeanine Cumminsâ book about a woman who had to illegally emigrate to the U.S. And âA Very Stable Genius,â a book about President Trump by two Washington Post reporters, is big,â she said.

Do Trump fans or haters buy that?

Does social media help you?

What are some personal favorite books?

And what is the best seller in the storeâs 16 years?