âGardens are never the same twice; they always go off on new riffs.â 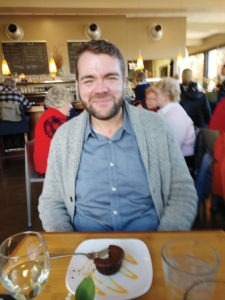 Kelly Norris is the Director of Horticulture and Education for the Greater Des Moines Botanical Gardens (GDMBG). We asked him to lunch recently, and he chose Trellis, Lisa LaValleâs gem of a cafÃ© in the GDMBG. To our surprise, our meeting coincided with the restaurantâs âChefs de Loireâ luncheon with chefs from the Loire Valley of France cooking.

We ordered identical meals of wine, velote of pumpkin soup with espuma of porcini mushrooms and walnut crisps, roasted Viennoise of cod with lemon beurre blanc, and chocolate flowing hearts. We agreed the dessert starred, but everything was good. Noticing baby breath flowers on the table, I asked Norris what other restaurants does he visit that impress him with the effort to higher aesthetics.

âThatâs hard because fresh flowers are rare in restaurants these days. I often work until 11 at night, so I appreciate Noahâs, which is lovely and is still open late. In New York City, I love what Nur does with their space. They are just a little Middle Eastern cafÃ© in a basement room, but they create all kinds of beauty on their plates. I also admire Colita in Minneapolis, a beautiful Mexican place,â he said.

Norris celebrated his seventh anniversary at the GDMBG last week. What has changed the most in those years?

âOur rebranding as the âgardensâ rather than the center was in 2013. We have walked several miles in several different directions since then. We have 14 acres now of which seven have been redeveloped. The next seven will be interesting challenges. We have gone from hosting 60,000 visitors a year to 140,000 now. We now have 3,500 different types of plants from all over the world. Our future is going to be one of new purposes,â he said.

What new purposes would be coming?

âI think that the rebranding suggested a new way of looking at what we can be. We are not just a museum and an attraction. We have a chance to also be a leader in redefining what the entire city can look like horticulturally. People come here to see beauty just as they might at a museum. Unlike a painting, though, plants suggest what they can do at home. Their effect on the city is broader than with art. Connie Wimer calls us âthe lungs of Des Moines.â I like that; we breath creative life into the entire organism,â he explained.

What plant at the GDMBG is the most valuable?

âProbably that would be our ginkgo tree in our bonsai garden. It dates to 1865. Itâs really hard to assess its value, but fortunately our insurers allow us to insure it as fine art,â he said.

What are some of the odder things Norris is asked?

âI am constantly getting photos from people asking me to identify plants. I also start getting phone calls in September every year from people who have a house plant that has grown out of control. In some instances, they tell me that their spouse has given them an ultimatum: âEither the plant goes or I do.â Of those calls, most are about Norfolk Island pines. They are the most overrated house plant now. The fascination with them is gone,â Norris explained.

What is the most underrated house plant then?

âStreptocarpus. I hate that name because it sounds like an infectious disease, but they are wonderful flowers that were popular two generations ago and fell out of favor. They are an African violet, sometimes called Cape primrose. They can flower for months and months,â he said.

How did Norris get into horticulture?

âWhen I was still a teenager, I talked my mom and dad into buying an iris farm. We bought 40,000 plants in Texas and transported them on the back of a flatbed semi to southern Iowa. I got a bachelor of arts and a masterâs degree in horticulture from Iowa State. I then published a book on irises, and then I took a breath and thought, âWhat next?â The job here found me rather than the other way around. It was a dream come true and also a dream I did not know I had,â Norris explained.

Norris and I discovered that our families both came from Taylor County in southern Iowa. Not a whole lot of people do.

âMy dad was a contractor and farmer, and mom did the books. We were not typical iris people at all.â

How did the 40,000 iris plants like moving from Texas to Iowa?

âThey almost all adapted. They are very hardy flowers,â he said.

Who are Norrisâ inspirations and role models?

âLocally itâs our four founders â Buzz Brenton, Janis Ruan, Tim Urban and Fred Weitz. Those four are forces and know how to get things done. On a larger playing field, there was a guy named Marco Polo Stufano. (He won the Veitch Medal for achievements in horticulture and science. The English Royal Horticulture awards the prize each year. In 150 years, only five Americans have won.) He started a place called Wave Hill, a 28-acre public garden and cultural center in the Bronx. It overlooks the Hudson River and Palisades and had the potential to become a severe blight on New York. He transformed Wave Hill into something creative and inspiring. I am using Julia Childâs âArt of French Cookingâ now as a model for my next book on modern naturalism. I want to simplify the subject like Julia did, make it something an ambitious housewife can understand,â Norris explained.

âThe thing Marco said that encouraged me was simple â that we make gardens for photographs, because that represents memories of things that inspire us, because such memories can propagate additional gardens. When the New York Times wrote about him at the time he retired, they compared him to a jazz pianist on a riff. I like that a lot because gardens are never the same twice; they always go off on new riffs,â he said. ♦