Advertising agency executive shares her views on the future of digital. 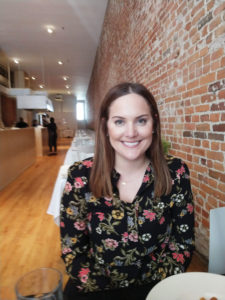 Kristen Sabin is the chief operating officer of full-service digital agency Happy Medium, running day-to-day operations across sales, processes and policies, and human resources, as well as working closely with the CFO on budgeting and financial planning. In other words, new age advertising. We asked her to lunch, and she chose Lucca.

âI love this place. Itâs fast, but itâs so much better than fast food. Itâs gorgeous and quiet. Itâs one of the few places where you can have a business conversation over lunch without raising your voice,â she explained. The acoustics are helped by the thick brick walls of 19th century construction. Pasta, sandwiches and salads are featured.

While we were chatting, restaurateur Mike LaValle walked by and said, âOh, I love those clams and spaghetti,â pointing at my plate. The best endorsements for restaurants are the personal patronage of other restaurateurs.
When I was going to high school in Des Moines during the early 1960s, I could count the advertising agencies that actually employed staffs on one hand. Advertising choices were similarly sparse â print, radio and television, which was still the new kid on the block. I had to ask Sabin just how drastically all that has changed.

âThe Internet and digital media have changed that world, and it continues changing. Every week, even every day, there is some new social media network. Digital has allowed more players because its created ways to work with smaller budgets and new audiences. Besides print, radio and TV, today the choices are different. There is social media, organic and paid advertising. Itâs all made it easier to target the audience you want to reach,â Sabin said after explaining to me that organic advertising is what my generation called word of mouth campaigns, which can be exploited exponentially today on social media. Word of mouth now can go viral.

âWe have clients who make podcasts. We help them get more listeners simply by using social media,â she added.
I asked Sabin to target me, a 73 year-old, college-educated white male writer. After thinking about that for at least two seconds, she nailed me. âNPR.com.â That and BBC.com are the two websites I spend the most time on. What about a 35-year-old white male? âESPN.com,â she said. And 35- to 45-year-old women? âBHG.com.â

How did Sabin land in Des Moines?

âI grew up in Missouri but moved to Cedar Rapids before eighth grade. I graduated from Linn Mar High School there, and, since all my classmates seemed to be going to Iowa, I went to Iowa State. I needed something a little different. I had a double major in Journalism and Mass Communication, with a concentration in Public Relations, Apparel Merchandising, along with Design and Production. After a year in New York City, I read a story in the Des Moines Register about Happy Medium. I became their fifth or sixth employee in 2012.â

Happy Medium was created by Katie Patterson, previously a salesperson for WHO TV. It professes four core values: curiosity, happiness, integrity and teamwork. What does that mean in the work place?

âBy prioritizing the needs of employees, we believe we can grow the work force. We now have 24 employees,â she said.

Thatâs more than four times more than when Sabin started seven years ago. My generation perceives Happy Medium to be a young peopleâs company.

âOur average age is 35. We are a digital creative agency. We will try anything. Too much layering of approval stifles creativity. We have clients of all ages. Lots of them see us as having a better understanding of social media, but we try everything,â she explained.

Since so much of their work is digital, do they even have to leave their offices to pitch clients?

âOur first choice is always face-to-face meetings. We do that whenever possible, even for clients located in other parts of the region. Video is better than all but in-person meetings,â Sabin explained.

How is the basic pitch different than for traditional adverting agencies?

âWe are more solution focused. We talk about pain points, about upgrading websites to generate more revenue, about total media campaigns. Radio and television are still in the mix. We want successful outcomes, to make sure that a clientâs goals are being worked at,â she said.

Why is digital winning so much advertising market share?

âItâs harder to pinpoint target audiences on radio and television. The so-called ratings are more complete and accurate with digital. In digital, they count every eyeball. In radio and TV, much is guess work.â

What are your biggest scores at Happy Medium.

âLaunching campaigns for top brands such as Mattress Firm and The Art of Education University, one of the worldâs largest online graduate programs for emerging K-12 art instructors,â she said.

What kind of advice does she have for the general digital media explorer?

âKeep broadening your perspectives. Itâs way too easy for many people to just hang on the sites that express the same thoughts, politics and attitudes that they profess themselves. That stifles you,â Sabin said.

What does Sabin see having the biggest impacts on digital media in the near future?

âI think the biggest changes might come because of the improvements and expansion of voice activation. Itâs already happening, but itâs still in infancy. That and artificial intelligence are going to impact the Internet and personal lives in general in many ways, some foreseeable and others not so much. It will be exciting.

âThe other really big thing might be the grab of government. There is so much money out there that politicians are going to come after it. Itâs already happening to American tech companies in France. Itâs too much of a temptation for governments. The money is irresistible,â she prophesized.

The day after our lunch, stateâs attorneys general launched an investigation of Google. To my old thinking, anti-trust regulation was on the turf of the federal government. But as Sabin said, the money is irresistible. ♦