The image of a used car salesman has changed. 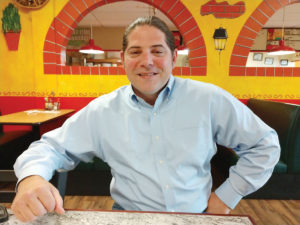 Mark Anderson is a manager at IA Motors, a used vehicle lot on East 14th. We asked him to lunch recently, and he chose Rancho Alegre, a Latino cafÃ© on Indianola Avenue that serves Cuban fried beef, Venezuelan pabellon, patacon and arepas, Columbian empanadas and bandejo paisa, plus most Mexican entrees familiar around central Iowa. Tri-colored enchiladas, superb beef cheeks, two-tortilla street tacos and a kitchen that is open for lunch and dinner seven days a week all help keep the parking lot full.

Anderson says he likes the place primarily because the people running it are so nice and friendly. He also likes that it is situated between his car lot and the local weekly car auction on the east side. He was working on a list of 30 cars he hoped to buy there when we met.

âMostly I go to the auction to buy cars I think I can resell quickly. Sometimes I even go looking for a specific car that a customer wants. I mostly just take cars there to sell that I have taken on trade-in and donât see moving quickly on my lot,â he explained.

Used car guys used to have an infamous reputation as being untrustworthy. That has changed in the last 10 years. A Readers Digest story recently ranked the 11 least trusted professionals in America, and used car salespeople were not on the list. Psychics led politicians, fundraisers, home contractors, real estate agents, lawyers, taxi drivers, mechanics, journalists, financial advisers and religious ministers. (Firefighters, pharmacists and nurses were the most trusted.)

This was not something that people were predicting back at the beginning of the millennium. What happened?

âOne main thing is that automakers are building better cars. Itâs rare to get stuck with a lemon today. From our point of view at IA Motors, itâs in our name. IA has a double meaning, the abbreviation for Iowa but mainly itâs code for âInstant Approvalâ financing. That is our main marketing strategy,â he said.

How does that work?

âBasically, we act as a middleman between the buyer and the bank that provides the financing. We pay them to act as our collection agency. The lender then reports to the regulatory bureaus. This used to be rare, but after the recession of 2008, money was really tight, and this was a way for filling a gap.

IA Motors advertises across all of Iowa with the IA loans featured in their marketing. How is that feasible?

âThe Internet makes statewide advertising possible. Most rural customers of ours seem to feel that Des Moines is going to offer the best bargains, just because we are the biggest market. So, we get a lot of out-of-town customers. Hey, Iowa is a small pond to fish. Sometimes you need to throw a fish back and let it grow. Old-school thinking in the business was short term â keep every fish you hook. I prefer long-term thinking.â he said.

What kind of vehicle works best on his lot?

âWe try to only deal in late model cars and trucks. We inspect every vehicle at least twice and try to get cars that are still under warranties. I feel that by taking care of customers, I will see them again. If they donât have to make expensive repairs, they are apt to pay off loans and refinance. I am more of credit officer than a salesman today. The Internet educates the buyer so well now that there isnât much selling to do,â he explained.

What is trending today, and what does Anderson expect to see trending in years to come?

âTruck sales are up over cars, and that isnât changing. Ford is down to just two models of sedan. Rural buyers
particularly love light trucks, and they hold their value better than any other vehicle. When I started selling in
Des Moines at age 19 in the mid 1990s, I worked for Suzuki. Three years later, the SUV fascination swarmed the nation. Today crossover vehicles, like soccer mom vans, look more like SUVs than vans used to.

âAs to the future, smart cars are it. They will put drivers out of business, but they will also put car thieves out of business. There is no downside to that,â he predicted.

What will Anderson do when smart cars conquer the world?

âI would like to cater food to big lots and businesses. I also would like to restore antique cars. Thatâs what my dad does in Branson,â he said.

Anderson also worked in the restaurant industry when he was younger. Was that helpful to him?

âDefinitely. For one thing, I learned to talk to all kinds of people from all walks of life. Because the back of the house in restaurants is heavily Hispanic in Des Moines. I learned Spanish, at least enough to sell a truck. I loved the food business. My first job here was at George the Chili King. I would have loved to have lived during the car hop era,â Anderson recalled.

Why does food mean so much to Anderson?

âMy parents got divorced when I was 2 years old. My second set of parents didnât get along well either. I switched schools 15 times before middle school. I went to 13 different elementary schools. The happiest times of my childhood we spent with my Italian grandpa Tony and my grandma who was a baker. The holidays were split between those two households, and both grandparents were such great cooks that holidays were special,â he recalled. ♦