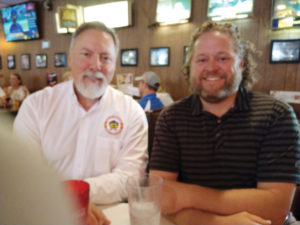 Brooks Reynolds is a founder and the major force behind bacon festivals in Des Moines, Japan, Colorado and Iceland. Scott Toland is the CEO and President of ICS (International Chili Society), which owns the World Championship Chili Cookoff and 123 other regional events in 41 states plus Canada. They are working together on the World Championship, which moved permanently to greater Des Moines this year after being held in 21 different places in the last 50 years. We asked them to lunch, and they chose High Life Lounge.

High Life Lounge is a throwback cafÃ© that serves old fashioned Midwest roadhouse food, like broasted chicken, bacon-wrapped little smokies, fried pickles, cheese curds, gizzards, pot roast, goulash and Stroganof to name a few. We met at 11 a.m., and the place was standing room only within 30 minutes. There was an afternoon game at the nearby ballpark that day.

What drives a guy to become an impresario?

âMy family has always been involved with charities. I had been involved with the reinvigoration of the Young Variety Club before I thought about a bacon festival. Bacon Fest wasnât profitable until its third year, but it has been able to raise $750,000 for non-profits where we hold events,â said Reynolds.

âI am a marketer, so I am always looking for market opportunities,â said Toland. âI approached Carol Hancock, who owned the ICS a few years ago. Their infrastructure, particularly their computers and online presence, was severely out of date. I pitched a deal to modernize that. Carol was in her 70s and countered with a suggestion that I buy the society from her and do all that afterwards.

âLike Brooks, I was attracted to the charitable aspect of the event. ICS has been able to raise $91 million for charities in 50 years. We are working with every youth group we can find in Iowa,â added Toland.

How did the world championship cookoff land in Des Moines?

âThe ICS had moved the world championship to 21 different places in 50 years since it last was held in Terlingua (Texas). I wanted a permanent home and thought we needed one to grow. I wanted a centralized location so contestants could easily attend from all over the U.S. and Canada. I contacted Greg Edwards at Catch Des Moines. He told me that Catch didnât do events, but that he knew a guy who did. He introduced me to Brooks, and we connected with the District at Prairie Trails in Ankeny, and we inked the deal in January,â said Toland.

Attendance at the Iowa bacon festival peaked a couple years ago. Does Reynolds believe the chili championship can grow here despite the dip in momentum for the local bacon event?

âAbsolutely, this event is going to grow and grow here. Itâs perfectly placed in September between the Iowa State Fair and the Iowa-Iowa State football game. Itâs outdoors in what is usually great weather. And people love chili,â he said.

I asked Toland to describe what people can expect at the championship.

âThe finals will be two days long in the District at Prairie Trail. There are four categories each for adults and children. First, we will have the traditional red chili of Texas. This does not allow beans to be used. Then we have homestyle chili, more like heartland chili than Texan. It must include beans. Then we have chili verde contest, probably best known in Mexico and New Mexico. Finally, we have a vegetarian chili contest. There will be 300 finalists from 41 states and Canada. We expect 10,000 people will attend, perhaps as many as 15,000.

âPeople will be able to taste dozens of different chilies. We will have vendors, a dozen food trucks, 19 bands, an extensive childrenâs area, axe throwing, six bars and the Iowa National Guard is going to bring their rock climbing wall,â said Toland.

How local will the vendors be?

What kind of prizes do the world champions win?

âThis is really cool. We will have four youth champions and four adult. Thanks to Des Moines Area Community College, all four youth champs will win $10,000 scholarships. They can be used at all four campi, including Iowa Culinary Institute. The traditional adult prize is $25,000. The homestyle prize is $20,000. Chili Verde winner gets $10,000, and the vegetarian champ wins $5,000,â Toland said.

The world championship began in an obscure place with an internationally famous man as its driving force. Tell us about that.

âCarroll Shelby was the original head of ICS. He was a race car driver who was twice named Driver of the Year by Sports Illustrated. He also designed the Lotus and the Mustang for Ford. He was one of four contestants in the first contest. It was held in Terlingua, Texas. He would later give ownership of the event to Carol Hancock, who had been a contestant several times,â related Toland.

Toland has moved to central Iowa. Did any staff follow him?

âOh, yes. Two of his employees from Ventura (California) have moved here, too. They love it. They canât believe that strangers actually talk to them here,â said Reynolds.

What is going on with the bacon festival?

âWe just finished our ninth annual bacon fest in Keystone (Colorado). It snowed on us twice this year. Last year was the hottest ever. The Japanese love it, and interest grows each year. We hold that in Kofu, which is Des Moinesâ sister city. Because of that success, we are looking at holding one in Iowaâs sister state in China. The Iceland event is growing, too,â said Reynolds.

Is there a good pedigree for food festival impresarios?

âJust love food. When I was starting school at Windsor, my mom asked me what my favorite subject was. I said lunch,â said Reynolds. ♦