Cowgirl and marksman is one of several women who dominate upscale catering in Des Moines. 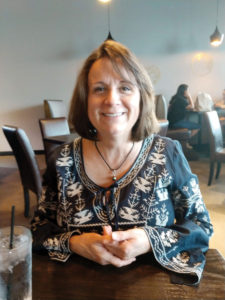 Cyd Koehn owns Catering by Cyd. She has catered in Des Moines now for 25 years. We asked her to lunch recently, and she chose Wasabi. Wasabi is one of five restaurants that former New Yorker Jay Wang has opened here. Wang has also recruited many east and west coast Asians to central Iowa. Koehn says Wasabi is her favorite sushi-plus cafÃ© because of its presentations, exotic specials and ramen menu. Over sashimi and noodles, we discussed a quarter-century in the catering business.

What is the biggest change she has witnessed during the previous 25 years?

âFor sure, itâs the ubiquity today of caterers. Seriously, everyone thinks that they are a caterer. Chick-fil-A calls themselves a âcaterer.â Thatâs not catering; itâs
home delivery.

âCatering is a full-service business. It involves setting up an ambiance with tablecloths, flowers and flatware if requested. It means logistics of moving food while keeping it at the right temperature without overcooking. It means serving foods that travel well. French fries do not travel well, even if coated with rice flour. French fries last a couple minutes before they deteriorate. Now that McDonaldâs has partnered with Uber Eats, I expect them to think they are a caterer,â she explained.

How has the web changed the business?

âItâs amazing that you can order and pay online now, but that is not a big deal with my customers. Most of mine prefer to give me a budget and a head count and let me do the rest. I love that. Itâs like asking a chef to just cook for you in a restaurant. It lets me incorporate the local providers I love â places like Leeâs Greens, Jenniesâ, Cleverley Farm, La Mie and Maytag. I love those associations and want to let more people know about them,â she explained.

Koehn has cooked for many governors. What has that been like?

âWhen I started, I was personal chef for Harold Hughes on weekends. He was a former governor then.I have been chef for the Culvers, the Branstads and the
Vilsacks. Not so much for Reynolds or the Rays. The Branstads were seriously into good food. Not that the others werenât. I really love setting up in famous local places like Terrace Hill, the Salisbury House, Jack Trice Stadium, the Capitol. I love going into peopleâs houses. Everyone is always happy to see you, even at funerals.

âJust today I did a breakfast for 50 ROTC cadets. They love my breakfasts because during their training, lunch and dinner will be brown paper bag affairs.
Tonight, I will serve barbecue for another 50 people. Then I will cater a yoga club with cauliflower crust pizza and tempeh. I have a client from Kentucky who wants biscuits and gravy. I Googled me some Paula Dean and bought some Jimmy Dean. I will probably be peeling potatoes and schlepping 50 pound coolers around at age 80,â she said.

Have you ever considered opening a restaurant?

âLots of people tell me I should. Thatâs not for me. I love that all my days are completely different. I know other caterers who get tired of that and want the
consistency of a cafÃ© with set hours. Not me,â she said.

Cyd is one of several women who dominate upscale catering in Des Moines along with Lisa laValle, Cherry Madole and Susan Madorsky of Tangerine and the sister act of Andrea Williams and Emily Gross known as Taste! To Go. Why does she think so many ladies excel at this profession here?

âI shouldnât speak for others, but for me, itâs an important segment of my life where I can control most aspects. Thatâs not so true with other parts of life. Also,
I believe women pay more attention to little details that separate the best caterers from others â flowers, table settings, center pieces, introducing new foods, etc.â

What has surprised Koehn the most about the job?

âWhen I started, I had no idea how physical this profession is. Heavy lifting is not for everyone. Things get heavier as you get older, too. Somebody probably told me that, but I wasnât listening,â she laughed.

Koehn has a reputation of being a cowgirl. This is not a metaphor as it often is. Like the late Paul Trostel, sheâs the real deal. Her father was a horseman, one of the best known in Iowa, and Cyd was riding from early childhood. She is also a highly rated marksman. Do cowgirl skills help in her business?

âHa. I donât know about that except that it requires gumption. I do know this â when Armageddon, or the zombie apocalypse, comes, you want me on your team. I am really good with the gun. I can kill it, skin it, butcher it and cook it for you,â she said.

Not too many lady chefs pack. How come?

âMy girlfriends were aghast when I bought a gun. I had been physically abused more than once and became determined not to let that happen again. I take it very seriously,â she explained.

She is also active in several group therapy associations that help battered women. Is that helpful?

âOh, yes. More than anything else, it is good to know you are not alone. I lost total custody of my kids in my divorce. Thatâs a scarlet letter â a mother losing
total custody. So, I appreciate all the other ladies with similar horror stories. I am part of Women Against Domestic Violence and Family Action Network. Like many others in my situation, I have found ladies who ran out of money to fight for custody. I ended up with a court-appointed attorney. Thatâs never a good thing. I cook for governors, CEOs and superstars. All I really want to do is cook for my kids.â ♦