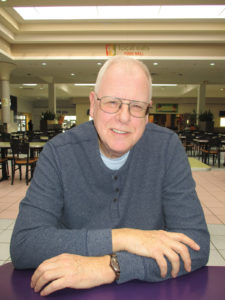 Larry Lehmer spent 25 years at the Des Moines Register, mostly under the radar on the sports desk. Since retiring he has published two books about the music industry â âThe Day the Music Died,â about the plane crash that killed Buddy Holly, the Big Bopper, Ritchie Valens and their pilot in Clear Lake, Iowa, and âBandstandland: How Dancing Teenagers Took Over America and Dick Clark Took Over Rock ‘n Rollâ which is also much about the payola scandal that changed radio music forever. We asked him to lunch and he chose the Merle Hay Mall food court.

âMy wife and I walk here frequently. We donât eat here that often but I am a big fan of the food court in general and particularly of Vietnam CafÃ©.â Larry had a bowl of pho while I had a tamales plate for Tamales Industry. I was actually hankering for some fried fish but the place that sold that in the past was gone and a heartily recommended Mediterranean cafÃ© had move into their space.

Because it was anniversary time for the tragic death of Buddy Holly, Ritchie Valens and The Big Bopper, we asked Lehmer why he wanted to write a book about the airplane crash that took their lives. âValens was 17. Holly was 22. The pilot was 21. The Big Bopper was 28, and he had a son born after he died. That son portrayed his dad in a later film. But mostly I was interested in the plane crash.â

How does a guy from Des Moines sell a book to a national publisher?

âI had an agent and he told me that he couldnât sell it. After that, I pitched the book personally to 102 possible publishers, I got four seriously interested. One of them was Texas Tech (in Buddy Hollyâs hometown of Lubbock) which I really appreciated but I had to go with a more lucrative offer elsewhere.â

âYes. I remember at the time of the crash I shoveled snow to earn enough money to buy one record by each of them. Holly was a good writer. I think he ranked with Chuck Berry as a writer. I had records before I even had a record player. My first record was a giveaway promotion by a moving company, by Colby Dijon. The first record I paid for was âThe Chipmunk Song.â I started taping off the radio in college. Everything is digitalized now but I still have some vinyl. At one time I had 27,000 songs on a recording device. That was too much for anyone,â he said.

Holly lived like a comet as if he knew he was only here for a short time. The entire songbook that most of us know today was written in something like 18 months. He got engaged the same day he met his wife and married within a week. Did you sense he was a burning phenom?

âI donât know about that. I have met his widow and believe she had a lot more ambition than Buddy or the Crickets did. The surviving members of the band have expressed wonder about âWhy us.â There were a lot of young bands then, even in Lubbock. Why were they the only ones who made it big?â

Did Lehmer have a favorite Holly song?

âTrue Love Ways. Itâs so different that I wonder if Buddy actually wrote it. I hear more (legendary producer) Norman Petty than Holly in that song. I visited Pettyâs studio in Clovis, New Mexico. Itâs in an old movie theater, and is quite impressive,â he replied.

Petty recorded Roy Orbison there, too, I think. They call it the Clovis Sound. I think there was some strange luck involved with the fated crash?

âYes. Waylon Jennings gave up his seat to the Big Bopper because the latter had trouble sitting for long periods of time. The car ride to Fargo was a long one. Tommy (Allsup) lost his seat in a coin flip with Valens. Buddyâs replacement in the band committed suicide a couple years later,â he said.

What interested you most in the American Bandstand story?

âThat was similar. Teenagers became national stars overnight. Because the show was in Philadelphia (for its first decades) these teenaged kids were suddenly national stars. Mostly I was attracted to the payola scandal, which Dick Clark survived better than many disk jockeys. He was out of radio but stayed in TV. That whole thing came out of a music industry party in Miami for DJs. There were 1,600 DJs and only one was female. They airlifted these guys to Havana, took them out to sea for gambling, and of course supplied every vice of the day. Investigation of the party led to the payola scandal. Alan Freed was my favorite DJ. He is one of the guys credited for founding rock ânâ roll. The scandal ruined him,â he recalled

Is Lehmer watching American Soul, the TV series about the founding of Soul Train, a similar phenomenon set in Los Angeles?

âYes. There are interesting connections. When Don Cornelius was pitching national sponsors for Soul Train, some of the brass at ABC suggested that they alternated Bandstand and Soul Train. Dick Clark told them âIf you want a black Bandstand, Iâll give you one. He did but it didnât last very long at all. One Philadelphia journalist tried to explain why: âThe sexiest women in the world are all dancers in Soul Train.â

Does Lehmer have favorite local musicians?

âYes, I have always liked the Nadas. I like Soul Searchers, Randy Burke, Final Mix, Bob Pace and Rob Lumbard,â he recalled.

What does Lehmer think of the current Register sports page?

âItâs different. We had 15-20 guys once who wrote part time, 16 or 29 hours a week. We had a lot of mentors in the newsroom, the old timers with war stories like Gene Raffensperger and Nick Lamberto. I donât know that the writers today get much mentoring or editing. If they are on the Iowa or Iowa State beats, they empty their notebooks every day into the paper. Not much of anything else gets covered. (Wrestling writer) Dan McCool must be rolling over. (McCool is alive). Today, a big story is Ashton Kutcherâs area code. I donât even know if the paper has an office at the police station anymore,â he said. ♦