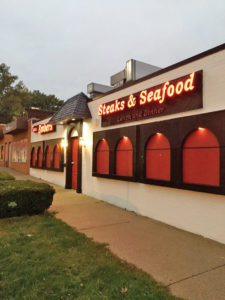 Steve White is probably Iowaâs greatest impresario, though he prefers the less descriptive word promoter. He brought world-famous shows to Iowa and the rest of the nation from the 1970s until recently. He calls himself âmostly retiredâ now but still works with Widespread Panic and invests in shows. We asked him to lunch recently, and he chose Jesseâs Embers, a cozy steakhouse that has been around Des Moines since before Whiteâs first concert.

A NASCAR race came on the TV briefly. That got White started on a diatribe on the stupidity of greed and disloyalty.

âIn entertainment, the most important resource you have is your audience. Once you lose it, itâs nearly impossible to retrieve. NASCAR is dying now; only a few tracks still sell out. They did this by forgetting who made them â the common man, the little guy. The sport has been in decline since Dale Earnhardt died, and it loses more heroes now every year,â he said.

White opened his first record store, Music Circuit, on Dec. 15, 1971. He sees the demise of the record store similar to that of NASCAR.

âThe little guys who made the record industry were the mom-and-pop stores where owners loved the product and knew how to sell it. After the big box stores like Best Buy and Circuit City became a retail force, the major record labels decided that they were all they needed. They could save money on shipping and labor by cutting out the thousands of little stores who made them. Then when the big box stores decided not to mess with albums anymore, the record labels had no network to fall back on. Like NASCAR, they were disloyal to the core that made them. They got exactly what they deserved,â he explained.

âWe were one of the last few concerts on their tour, and they canceled us because tickets werenât selling anywhere. That was really lucky,â he recalled.

After a successful Grateful Dead concert, White cemented his reputation locally after a riot at his third concert. Fans did $40,000 of damage to the Iowa State Fairgrounds during a rain storm after they saw ZZ Topâs busses pulling out rather than going on stage. That show, the first Iowa Jam, also included Boz Scaggs, Blue Oyster Cult, Pelican Peace Band and Brownsville Station. The fans also looted the drop boxes where half of each ticket was stored.

The very next day, White says he was summoned with local partners, Jim Henneberry and Jon Hoak, to an emergency meeting of the Iowa State Fair Board.

âThe first thing they asked us was where our two Chicago partners were. They had jumped the first plane to Chicago after the riot. Jaws dropped when we told them that,â he recalled.

White and his partners then produced $10,000 in cash to begin repairs on damages.

âWe told them when it was gone, bring us receipts and we will bring you another $10,000. That cemented us with the fairgrounds. They saw that the little local guys were stand up,â he said.

Because of the looted drop boxes, there were twice as many ticket stubs as tickets sold. Rather than offering refunds, they proposed a free concert.

âZZ Top found a date they could return, though they demanded air fare for the band and equipment. In those days, bands lost half their fees if they didnât play. So we had some profit from the Grateful Dead show and from our initial investment and from the unpaid talent fees. That funded the riot damages and the free concert,â he said.

Talk about turning lemons into lemonade.

âItâs the unexpected always. When something goes wrong, itâs usually the venue that gets egg on its face. The state fair appreciated us. (Director) Kenny Falk was good friends with (WHO radio host) Jim Zabel. He got me on Zabelâs show, and that really helped us out,â he recalled.

Another serendipity that came from the riot was that White and Henneberry began thinking about building a portable stage with a roof for outdoor shows. With help mostly from his stage hands, Music Circuit developed such a stage. It was state of the art for four years. He had three stages and crews traveling the nation from 1974 to 77. Two were with the Eagles and one for several other shows.

âIt lost state-of-the-art status to the design that collapsed and killed people in Cincinnati. Musicians donât like guide wires, but they make the roof safe. We stood through 70 mph winds, a race car crashing into it and a flood,â he recalled.

In the 1970s, thousands of young music fans dreamed about being a promoter. How did White make that dream come true?

âMostly I got lucky. I cold called a Denver promoter named Barry Fey. He was friends with Bill Graham and introduced me to him. Those guys taught me that the important things were to take care of your audience and to be loyal. Those qualities are disappearing,â he said.

There are lots of stories about jerks in entertainment, but who are the good guys in the business?

âRed Skelton was the nicest guy I ever worked with. Others included Harry Connick, Jr., Ani DiFranco, Winton Marsalis, Widespread Panic and Delbert McClintock. They value loyalty, and thatâs a rare commodity these days,â he said.

White says that Connick is unique.

âThe first time I worked with him, he was setting things up and rehearsing three days before his show at CY Stephens. I noticed this guy in shorts, sweats and sweaty headband in a dressing room. Turned out that was Connick. Heâs the only guy I know who actually works with the stage hands and equipment guys. Rain was pouring during that show, and still about 120 fans were waiting outside hoping for selfies and autographs. They asked Connick if we wanted them cleared out, and he said no, went out in the rain and stayed till everyone got their photo or autograph. Another time, he asked me if I could build a boxing ring so he could spar with his bass player before a concert. Heâs one of a kind,â White declared.

If White were young today, would he still want to get into the business?

âNo way. It would be like applying for a job at Walmart. Thatâs what Live Nation (a huge company that has made overtures to Des Moines about opening its own venue here) is to music. They control 80 percent of worldwide ticket sales and want to monopolize every aspect of the business. Des Moines has a good local promoter and a number of good talent buyers. Live Nation would kill them. They would make it like living in the old Soviet Union instead of the USA,â he declared. ♦