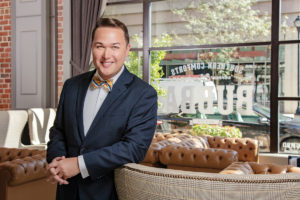 Chris Diebel is a Des Moines restaurateur and marketer who owns Bubba Southern Kitchen and Whiskey Bar and represents the Orchestrate Group that includes Centro, Django, Malo, Zombie Burger and Drink Lab, South Union Bread and Deli, and Gateway Market and CafÃ©. Heâs also a bona fide trendsetter in style and fashion. We asked him to lunch last month, and he chose Skipâs, a reliable and beloved South Des Moines classic (rarebits, de Burgos, cavatelli, Italian sausage sandwiches since 1981) that skips along without missing a beat since much-loved owner Alvin âSkipâ Bachmanâs death in the last days of 2013.

âItâs my go-to lunch place for Mondays. Outside of downtown, not many places are open for lunch on Mondays. Working downtown, I really appreciate the places that have big parking lots. Skipâs does, and itâs usually full inside but not outside,â he said.

It was clear to me that this was a place Diebel admires and wants to emulate. Service, from the moment we walked in, was personal, as it is at Bubba.

Asked about his favorite lunch places in town, for which he does not work, Diebel ranked Skipâs with Jesseâs Embers (âEspecially on cold days.â), Trellis (âWhich is always wonderful.â) and Table 128 (âWhen I have business in western suburbs.â)

What about places for a drink?

âFoundry just began bar hours. I liked it there. My favorite happy hour place is Juniper Moon because itâs quiet and private enough to talk business. For after dinner, Hello, Marjorie is my spot. The guys that own it are opening an East Village Tiki Bar this year, too,â he said.

Diebel and I share a common respect for Lubbock A.V.A. (American viticulture area) wines. More than anyone else, Diebel is responsible for bringing them to Des Moines. How did that happen?

âMy dad (who is Texan like Diebel) brought me a bottle of McPhersonâs wine and told me to reserve judgement until I tasted it, and he was right. I was hooked. I cold-called McPherson and several other Lubbock winemakers. McPherson responded even before they had distribution in Iowa. Johnson Brothers picked them up, but they still had to spend a lot of money to enter the state. I committed to buying a large order and so did Gateway Market. They sent a rep up here to host a wine dinner,â he recalled.

I personally was so impressed with Lubbock wines that I visited Lubbock this summer. That high desert climate turned out to be rather unique. Flatland Lubbock, the legendary Llano Estacado of âHigh Plains Drifterâ fame, ranges in altitude from 4,000 to 6,000 feet. That means grapes get sun and heat all day and cool off at night.

Lubbock wines are a great hook for Bubba. Lubbock only legalized local wine and beer sales this decade. Since then, applications to Texas Tech University have been rising rapidly, and local cotton farmers are converting their fields to vineyards, which produce far more money per acre. How did Bubba get started?

âIn 2013, âpop-upâ restaurants were a rage. Paul and George (Orchestrate owners Rottenberg and Formaro) decided they wanted to test drive it, and I told them I wanted to open a southern restaurant. We gave it three nights in Hoyt Shermanâs lovely gallery space, which has a southern vibe, and sold out all three nights. Kolby Jones and I started looking for a place to open a permanent southern restaurant. It was frustrating. We came close but couldnât close a deal until Jeff Hunter decided to sell the Clemens Building. That space had been Raccoon River Brewing Company, which always used the Hotel Fort Des Moinesâ kitchen. We had to build a kitchen and completely change the look â you can never look like a retread â but we opened pretty quickly,â he said.

âOur whiskey program has really helped us succeed. We have more than 100 whiskeys. Our GM, Kate Willer, is a versatile asset who worked 12 years in New York City for Danny Meyer and such. She knows the front and back of the house, the bar, everything. Itâs wonderful to have people who can shift positions,â he acknowledged, even alluding to the Chicago Cubsâ success at this.

What other trends does he see in the local industry?

âI think hyper local is coming. My dad is retired now, and heâs having fun growing new stuff, like all kinds of heirloom okra, which fits us. Red and squatty okra. The other thing is fresh fish. The local distributors are bringing way more new products to the table,â he replied.

Diebel and his Bubba partner Jones have been friends since high school, when both worked at Younkers. Diebel went to Roosevelt and Jones to Dowling.

âWhen we opened Bubba, we needed an LLC, and I told Kolby that it was Teddy Maroonâs, for our two schools. He laughed and said that would be a great name for a bar on Ingersoll. Two years later, we are doing that,â he said. All investors in the restaurant are graduates of either Roosevelt or Dowling.

What kind of place does he envision?

âIdeally, I would like to be what Jimmieâs American CafÃ© was decades ago. The place where Roosevelt and Dowling grads go. Ingersoll is such a sophisticated clientele now that we have to be careful. You can not just call in a salad menu there. Itâs a really important thing to get those right. We share a building with a Brazilian steakhouse, so I donât see us trying to compete there, but we want a seriously fresh healthy menu and an upscale bar program. We will have a fresh-squeezed juice program at all times. We wonât have a walk-in cooler, just a reach-in, and we will use the space that a walk-in would take for keg storage. Kegs are seasonal and have to be rotated and purchased when available,â he said.

What does he hope the Ingersoll store can do that Bubbaâs canât?

âMany times we go out with friends to an event, usually downtown. When itâs over, they often say, âWe have the sitter for another hour, letâs go somewhere closer to home.â I hope that people will stay out later at Teddy Maroonâs because in downtown, everyone wants a 6:30 reservation and no one wants one after 8 p.m. We need to be able to do two table shifts a night. I think Ingersoll might help with that,â he concluded. ♦