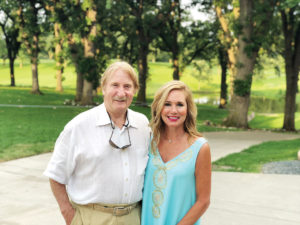 Brad Burt with his partner in Maid-Rite, wife Tania.

Brad Burt is CEO of Maid-Rite. We asked him to meet us for lunch, and he suggested the companyâs store in the food court of Merle Hay Mall. That is one of the best food courts around with Vietnam CafÃ©, Twisted Pizzeria, Tamales Industry and Lazize Mediterranean offering considerably more eclecticism than the average food court. It also illustrates the versatility of Maid-Rite to fit in.

âWe are associated with small towns, but we have interstate locations for the nostalgic truck driver, suburban locations, because the suburbs have grown while small towns lost population the last 90 years, and malls, too,â Burt explained.

Maid-Rite, and loose meat sandwiches in general, are associated with the Midwest. Rosanne Arnoldâs fictional character on TV opened a loose meat cafÃ© in Illinois, and the actress did the same thing in her reality role as Tom Arnoldâs wife. Arnold grew up in Ottumwa, a city so obsessed with the loose meat sandwich that patrons of Canteen Lunch in the Alley insisted the city give up an effort to buy the 1936, 16-stool venue for a parking garage. Instead they purchased air rights and built the garage around and over the cafÃ©.

âThatâs the kind of love Midwesterners, particularly Iowans, have for the sandwiches. I had a big, tall guy come up and tell me that his last meal before deploying for World War II was a Maid-Rite, that he thought about Maid-Rites the entire time he was overseas, and that his first meal on coming back home was a Maid-Rite. They are a serious illustration of how taste influences and invokes memories, like Proustâs madeleine cakes,â Burt recalled.

How does Maid-Rite service this nostalgia craving?

âWe cater a lot of class reunions, homecomings and such things. We have three interstate highway stores, in Avoca, Williamsburg and Lamoni, for Midwestern truckers who might have been relocated elsewhere. People come to us. In summer, when families tend to travel together and visit grandmotherâs house, people come in all the time for the memories. Like the World War II soldier, it is often their first stop,â he said.

Personally, some of my fondest memories of growing up included out of town trips with my father, mostly to football games in Ames and Iowa City. We would always stop at the Maid-Rites in Newton and Ames before and sometimes after the games, too. Is this nostalgia thing personal for Burt, too?

âOh, yes, very much. Growing up, my best memories included going to a Maid-Rite on Saturday, spinning around on the stools and eating Maid-Rite sandwiches and drinking malts. I recall the Ames store; it was downtown on Main Street just off Duff. And the one in Newton, too; it was downtown on old Highway 6. Before the interstate existed, it was right on the road to Iowa City,â Burt recalled. (Danâs Sandwich Shop is the current name of the cafÃ© at this location, but its design and loose meat sandwiches are unchanged in many decades.)

Part of the original attraction of the loose meat sandwich was its affordability. In the Great Depression, when the chain spread wings, it provided people who had little money for eating out a cheap meal in a social atmosphere.

âFred Angel, who began the chain, was a Muscatine butcher looking for an inexpensive outlet for beef. The sandwiches are still priced under $4, which is a bargain today. The places were usually counters in horseshoe or rectangular shapes so that everyone could converse with everyone else. A lot of them were built near factories and would attract colleagues. We have tried to keep as much of this atmosphere as possible, but modern diners also want tables and chairs and more room. Taylorâs in Marshalltown was the fourth store in the chain and still looks most like the old stores,â he said.

It seems like Maid-Rite is a natural for the Iowa State Fair. Why arenât they there?

âNot for lack of trying. We get turned down every year and told thereâs no room. Then I read about all the new places that open each year. In 2008, they did a survey asking people what they thought was the most iconic homegrown Iowa food. The phrasing isnât suggestive of us at all, yet we finished third, behind sweet corn and Iowa chops,â he said.

Maid-Rite was there once. What happened?

âWe bought the company in 2001 and inspected all franchises for safety and liability issues. I had to close the one at the fair down for failing to comply with our standards. Remember, a Jack in the Box killed four children in 2002 with food poisoning. They were big enough to survive, but we arenât. We have to keep people safe first and foremost. I personally think the fair board resents me closing that stand down and wonât budge on letting us back,â Burt mused.

The company had been aggressive in the first years after Burtâs group bought it. They expanded to Texas, North Carolina, Arkansas and 70 stores overall. They told The Des Moines Register they had plans to expand to 1,000 stores. Today they have retracted to 40.

âWe learned who we are. We are a Midwestern company with strong nostalgic ties to the region and particularly Iowa. We are now in seven states, all in the Midwest. We even had a consultant tell us we needed a new multicolored logo. Our customers set us straight on that; they love the old stop sign logo. As our motto says, âOur name says it all.â Expansion is into catering and other services. Itâs good to know who you are,â Burt said.
How else has the business changed?

âThe biggest thing is that vendors are now so competitive that they provide services that we used to need to do ourselves. Each new store needed a detailed floor plan. A vendor will do that now. It made it possible for me to move my corporate office to my house. That saves me $85,000 a year in rent. Some things do get easier as time goes by,â he said.

Yes, but Maid-Rite and its breed are glad that so many of us think the old days were the good times. ♦