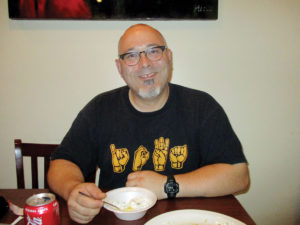 Heath Alan is one of the most talented and best known of local musicians. Heâs played with Harry Connick, Jr. and Louie Bellson. Locally he works with top talents like David Zollo, Brother Trucker, James Biehn, Bonne Finken and King of the Tramps. Heâs also a full-time special education teacher and a father of two. Fascinated with how one navigates that double life, we asked him to lunch. He chose Amaravati, a rather new Indian restaurant specializing in the cuisines of Hyderabad and Waltair. While enjoying deeply flavored curries and custards which Alan called âamazing,â I asked him about the intricacies of such different careers.

Which interest came first for Alan?

âMusic for sure. Everyone in my family growing up was a musician, on both sides. Even going back to our European roots, the family was filled with classical musicians. Momâs folks were from Portales, New Mexico, which was an extension of the West Texas musical tradition (that produced Buddy Holly, Jimmy Dean, Natalie Maines, Roy Orbison, Ernest Tubb, Waylon Jennings and Bob Wills, to name a few). I grew up listening to Bob Wills and the Texas Playboys with my grandfather. He fell in love with my grandmother listening to them. I also have always loved hymnals. To me, they are filled with buried treasures musically.

âMy grandparents were also farmers. They worked hard and played music for holidays and weekends. My mom was a blues singer, and it was a very different life for me. Blues singers tend to be itinerant, so we moved a lot. I went to 29 public schools growing up. Not much time for making friends, so all I wanted to do in high school was play saxophone. Yamaha gave me an endorsement that included a trip to Carnegie Hall (probably Americaâs most venerable concert hall). I got to play there, and I was hooked. Fortunately, I got a full ride to UNLV (University of Nevada at Las Vegas) to study music.

âThat led to opportunities to play with Harry Connick, Jr. and Louie Bellson. Just being around those guys taught me so much, about showmanship and humor for instance. It also brought me to realize I wanted to play music and write music and produce music, but I didnât want to teach music. So, I also got a degree in special education from UNI. My wife was a special education teacher, too. I started playing in Cedar Falls with The Blue Band, played sax for them for 15 years. Thatâs how I got into the Iowa Hall of Fame. Now I help the organization out with new museum projects. The main one is in Arnoldâs Park, and thereâs a new one in Ottumwa,â he said.

âAmerican Idolâ and Iowa girl Maddie Poppe was asked by a mentor near the end of the national competition if she was ready to busk for tips for five years. She said, âNo, Iâm better than that.â By winning the title, she wonât have to, but the reality for many talented musicians is that busking is the only gig available. Des Moines, and particularly Ingersoll, has a reputation for a being super center of such âfree music.â Alan has no complaints.

âGoing into music as a career is a huge risk,â he said. âVery few ever get to the point of security,â he said.

Where can someone catch his band?

Thatâs a lot of moving around.

âYeah, the only way I can do it and stay married and involved in my kidsâ lives is to keep it efficient and seasonal. I only play weekends during the school year. This summer has been crazy. Right now I have played 15 days in a row. I found these huge tool boxes at Home Depot. They are all on wheels, so I converted them to haul my equipment around. I have a lift on my truck so I donât have to lift anything anymore. That saves so much time. Several other musicians have bought these now, too,â he said.

How expensive is the equipment needed to carry on this life?

âI can tell you what it costs to replace the stuff that I lost this summer to extreme heat and rain. $3,000. People donât even think about truck and equipment insurance, but you better have some. Fortunately, I have played long enough now that I have played with nearly everyone it town. I get a lot of production and side work. That pays the insurance. I also run a business that subcontracts musicians to play weddings, etc. I love weddings. Most musicians hate them. Itâs just so special to be a part of such a big event in other peopleâs lives,â he confessed.

How did the musician from Las Vegas evolve into the special education teacher/dad?

âI asked early on about doing concerts for people with disabilities. Now I do Christmas dances, Easter concerts, the Iowa Games, Special Olympics. I work the Daddyâs Time Out Tent at Adventureland. Thatâs a big deal for me. Growing up with a single mom, we didnât have money for places like Adventureland, so it was always a big deal to me. Now I have to wait to do my sound check there until the puppet show is over,â Alan laughed.

âTeaching special ed is so rewarding. I focus on transitional co-ordination â teaching people with disabilities whatever it takes to help them transition into the work place and learning centers. I teach a little bit of a lot of things â cooking, life skills like math, independent living skills. The idea is to give people what they need to have freedom to make choices,â Alan said.

He has recently finished his second album with all original compositions. A lot is said about how the recording industry is changing. What does Alan think about that?

âA recording contract is no longer the holy grail. Musicians have to make their money now on live performance and merchandising,â he admitted.

Where does he find inspiration for his compositions?

âMy wife is my muse. I find that the longer we are married, the more love songs I write. There was a time I thought I would never write a love song,â Alan recalled. ♦