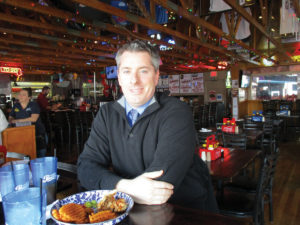 Brian Hardin was named Drakeâs 17th athletics director in November. A Des Moines native and former Drake Relays champion, Hardin came to Drake from Marquette, his alma mater and a school with a similar athletics department to Drake, particularly in the fact that basketball is the only revenue sport at both schools. We asked him to lunch last month, and he suggested Jethroâs at Drake, a restaurant closely tied to Drake sports.

The Drake Jethroâs is a barbecue and sports bar hybrid known nationally for big servings. Signs on the walls tout its awards as âAmericaâs manliest barâ and for eating contests covered by Food Channel and other national outlets. It names sandwiches after Drake athletes, and Drake paraphernalia hang from the ceiling.

âWhen I was at Marquette, we had an event called National Marquette Day. Alumni from all across America would meet at various places. We had the Des Moines event at Jethroâs,â Hardin recalled.

We asked Hardin, who worked at Notre Dame before Marquette, if he didnât bring a little luck of the Irish to town coming here at a time of success and excitement for both the menâs and womenâs basketball programs. Former Drake A.D. Sandy Hatfield Clubb had taken criticism for hiring earlier coaches, but she seemed to hit a jackpot with her last two basketball coaches.

âI went to the Loyola (vs. Drake) game in Chicago last week. Drake alums who live there would come by and congratulate me for hiring (first year coach) Nico (Medved). I thought, you ought to take credit even when itâs not due, because I have learned in athletics, you will get plenty of blame when itâs not due, too. Truth is that Nico had been hired by (Drake President) Marty (Martin) and Sandy as, obviously, (Womenâs Basketball Coach) Jennie (Baranczyk) had been, too.

I just want to stay out of their way and build our other sports programs to be as successful as Jennieâs. (At that time, the Drake women were on a 13-game winning streak and had not lost a Missouri Valley Conference game for two years. The menâs team was having its best season in nearly a decade, too.)â

Hatfield Clubb was a very partisan political person, hosting a big fundraiser for Barack Obama, among other things. Does Hardin intend to wear his political colors in that manner, risking the alienation of fans who might sit across the political aisle?

âI went to (West Des Moines) Valley when my dad taught government studies there. I never took his class, but lots of my friends did. He was very good at recruiting political candidates during caucus years. He would bring both Republicans and Democrats to speak to his classes. Some of my friends would say âI canât believe how liberal your dad is.â Others would say, âI canât believe how conservative your dad is.â I believe in keeping my politics and religious beliefs to myself.â

Basketball is the revenue source for all university sports at Drake. Is it feasible to think of developing another sport that contributes to the black ink?

âFirst of all, donât forget that the Drake Relays is a revenue maker. But, no, we have to be a basketball school. Our focus needs to be basketball and the Relays.â

Drake has been barely acknowledged in recent years by local media, which seem to be obsessed only with repetitious stories about Iowa and Iowa State football and basketball. Why isnât Drake âDes Moinesâ teamâ in the way that similar schools are in similarly sized towns â Wichita, Dayton, Omaha, Spokane and Indianapolis?

âFirst of all, the schools in those towns have been sending (basketball) teams to the NCAA tournament for years in a row. Success attracts interest. Itâs a chicken and egg thing; does attention bring success, or does success bring attention? Secondly, we have no control over what editors and news directors choose to cover. Our focus needs to be on what we do control. Drake is in a unique position in the state of Iowa, being the only private school competing in Division I sports. We can be uniquely attractive to a certain kind of student athlete. Thatâs why we do things like volunteering for Habitat for Humanity and similar organizations. We want to cultivate the image of student athletes who get out and give back to the community. Thatâs why you see our players go into the stands after games and thank people for coming. That kind of personal attention is important to kids.

If we want to reaffirm Drake as Des Moinesâ home team, thatâs the way to do it. We like to be a place where kids want to come early and stay late. We cultivate that. When players go into the kidsâ section after a game, that grows the sport.â

Hardin sees other ways that Drake distinguishes itself from the big state schools.

âAccess and proximity. Our games are easier to get to, to park at, players are closer to the fans. We are also far more affordable. Hy Vee has contributed to that with 2 for 1 tickets and other discounts. We have family days with the whole family getting a ticket, hot dog and drink for $20. Our fan base has been loyal for decades, but we have to expand it to younger fans.â

Drake and Grand View had developed a football rivalry until the series was discontinued a few years ago. Would Hardin try to bring that back?

âI donât even know why it was discontinued, but I will look into it. Woody (Grand View coach Mike Woodley) was a coach at Valley, and his sons were in my class there. I havenât thought much about scheduling yet; I have to find a place to live.â

How is the move to Des Moines progressing?

âWe want to move the family in April so that our boys (one aged 7 and twins aged 4) can meet new friends before summer. My wife always asked me that if we left Milwaukee could we move south. Technically, Des Moines is south of Milwaukee, but I donât think thatâs what she meant. This will be the furthest west she has ever lived.â

How is Hardin finding his first job as an athletics director?

âI have to realize that now I make decisions rather than offer suggestions. I know everyone screws up once. The goal is to not let it happen again. We had an Alumni Weekend last week to honor the 10th anniversary of our last NCAA team. It was encouraging to see the enthusiasm alums have for Drake but daunting to think that we have to find a way to keep in touch with them without Paul Morrison (the Drake historian who died last year at 100). No way can one person replace him. I keep a photo of him on my desk to remember the challenge his loss represents.â ♦