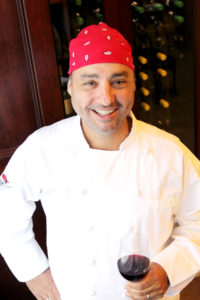 George Formaro obsesses about food. He wakes up in the middle of the night to read esoteric government manuals about pickling and charcuterie. He is owner/chef of Italian, French and Mexican restaurants, plus the Zombie Burger chain, Gateway Market and CafÃ© and South Union Bread CafÃ©. We asked him to lunch recently at Centro, his Italian restaurant downtown.

Is he opening anything new?
âNo, I promised my wife no new restaurants this year. We expanded Zombie Burger mainly for a partner who is no longer with us, so thatâs done.â

Whatâs the hardest part of running a restaurant?
âSustainability does not end with the products you use. Sustainability means paying all your bills. To do that in a 200-seat restaurant like Centro means being several different things. Chef Derek (Eidson) has to run three different restaurants under one roof. This is a pizzeria, a casual dining cafÃ© and a fine dining restaurant. We have to be all those things to pay the bills. If this was a 40-seat cafÃ©, I could run it with three employees, but no way can we make it here without appealing to people with very different expectations. Some people think that itâs wrong that we serve burgers at (French cafÃ©) Django, but we sell a lot of burgers there,â he said.

Formaro is famously diligent in the research and development of new food concepts. How extreme does he get in that?
âWhen I was working on ramen for Gateway CafÃ©, there were no English language books on the subject on Amazon. So I bought Japanese books, even though I couldnât read Japanese. Amazon wouldnât even deliver them to Iowa, only to San Francisco, so I had them shipped to my brother there, and I would pick them up when I visited. I got some translation help from Japanese friends here and in Ames. I ran through dozens of recipes for noodles and broth. Now I just buy noodles from an East Coast company that does them better than I can,â he explained.

How many homemade things does Formaro think are unnecessary?
âWell, homemade ketchup and mustard are a waste of time. Hardly anyone prefers them to plain old Heinz. Some fresh pastas are a waste of time. Many are wonderful, but there are dried pastas you can buy that are often better than anything you can make from scratch. I almost bought a big pasta making machine but didnât really like the texture it delivered, so I didnât,â he said.

Whatever drove an Italian American to open a French and Mexican restaurant?
âEach place I opened represents a serious obsession. I started off by giving up my chef gig to build a 17th century wood burning bakery, not too different from one my grandfather built in the 1930s. I still have the starter I have kept alive since 1989.

âI opened Centro understanding Des Moines was very loyal to its existing pizza places. But my love of history brought me to the realization that people would have to drive by their favorite pizza place to come to my restaurant. So we found an oven builder in New York City to build a coal-fired oven like the first pizza place in America, Lombardiâs, and we sourced a special fresh mozzarella from a place in New York that is a bit drier than fresh mozzarella we make and is perfect for pizza. I wanted a wood-fired grill also. Easy has never been a word I was comfortable using,â he said.

âEach place was a place I obsessed about and thought Des Moines needed. When I opened Gateway, it was fun because itâs a clean palette of cooking opportunities. Besides ramen, we can fry chicken in lard, make world class biscuits, do great rotisserie chickens, and classic fish and chips from shared conversations from a British fryer. I joined the Fish Fryers Federation of Great Britain. My exclusive burger blend (short ribs and brisket) debuted there, too. Zombie Burger was an obsession with the roadside burgers I enjoyed on my childhood station wagon trips around the Midwest. I worked tirelessly on a bun. I needed a bun that reminded me of the white squishy buns of the perfect all American burger â not an easy task, ask any chef that has tried this, but sturdy enough to hold the juice from the burger blend we developed. So for me, all the crazy burgers are fun, but the cheese burger and Zombie burger are the burgers that I crave when I wake up craving a burger,â he said.

âBut you asked about Django and Malo. When I was a young chef in the 1980s, French cuisine was the classic cuisine. Julia Child was the only TV chef, and she was all about French. My longtime obsession with french fries began then. I care more about doing common things well than about invention. I donât want to make a dish that tastes like something one creates when very drunk. For me, French cooking is still my safe place. Itâs where I go to hide from all the noise about trends and the new hot thing, which is always something that has been around for centuries. I studied the hotel menus from the Hotel Fort Des Moines and decided that French fit the space. Jeff Hunter (the hotel owner at the time) is a Francophile, so I bought an absinthe fountain and took it to his office and pitched him on a French restaurant, and he loved it,â Formaro recalled.

âMalo is a lifelong obsession with the cuisine of Mexico. As a bread guy, tortillas are important to me and every bit as much of a challenge as any other bread I make. Iâm obsessed with great, and the words âgood enoughâ do not resonate with me. So much trial and error for both corn tortillas and flour. Iâm also using both modern technology mixed with old world classic preparations. But I hide the modern part, because I want it to taste old world, respect history and tradition. We also cook sous vide, but we never use the term in descriptions. Science is helpful, but I donât want people to think I am a scientist. It interferes with taste. Malo is the one restaurant that does not attempt fine dining. Mexican fine dining does not interest people in Des Moines. They will order lobster but only in a taco.â

What else does Formaro want to cook?
âI am really interested in British pies and puddings. I am working on a recipe for eel pie with parsley gravy, but I doubt I could sell it in Iowa. Derek and I are working on jug hare with blood sauce, but that wonât likely make a menu either. Maybe a special event though. I often wonder what my life would have been like if I was content running a 40-seat cafÃ© with three employees. But all these obsessions got in the way of that,â he concluded. ♦