When the 54 corporate employees of Bank Iowa moved into their new workspace on May 1, several surprises were waiting. Stunning pieces of art from the collection of the bankâs family owners, a tandem bike in âBank Iowa blueâ and desks operated with a mobile app were just a few of the workspace perks revealed that morning at 1225 Jordan Creek Parkway, Suite 220, in West Des Moines.

Each of the new office components is a reflection of what Bank Iowa CEO Jim Plagge calls âthe human side of banking,â and community members are invited to come see for themselves on June 27 from 4 to 7 p.m.

âIt can be tempting to build a space for the work, but we wanted to build for the people who do the work,â said Plagge. âBanking is being dramatically reshaped by technology, and a lot of that change is really positive. Yet, when you think about the most meaningful transformation thatâs happening now, itâs all around culture. By giving our team members an exciting, flexible, high-tech-but-human-centric place to work, weâre empowering them to be critical thinkers, creative problem solvers and nimble innovators. All of that translates into over-and-above service for our clients and team members.â

Plagge will kick off the June 27 open house, which is being hosted in partnership with the West Des Moines Chamber of Commerce, with remarks at 4:15 p.m.

Following Plaggeâs remarks, guests are invited to take a self-guided tour of the new offices, which house several pieces from the Robert and Karen Duncan art collection. The extensive collection includes paintings and sculpture created by emerging artists from around the world. Itâs a collection that has been ranked among the top 50 in the world. For more than 10 years, pieces from the Duncanâs collection have been showcased in the West Des Moines location. In addition, the couple has commissioned local photographers in each of the 22 communities served by the bank to create images of local landscape and architecture. Those photos are on display in nearly every one of the bankâs 25 locations.

âTotal employee wellness encompasses so many things, including emotional, social and intellectual health,â said Plagge. âEnveloping our space in art, which often represents the highest human values, drives right at the bankâs commitment to honoring the people who make our organization great.â

Support for physical health and wellness is another important part of the culture of Bank Iowa, which was recently named one of the Top 100 Healthiest Companies in America. Chief Administration and Human Resources Officer Kate Wolfe and Executive Assistant Aanna Hoch, who led the redesign of the offices in collaboration with Workspace, said the physical well-being of employees was a key motivator behind the build out.

According to Wolfe, each segment of the renovated space was customized to the ways in which the inhabiting department works. For instance, the marketing team spends much of its day collaborating on projects as team, so their space reflects the need to have quick conversations and a collaboration area with a wall mounted screen and whiteboard.

âHealth and wellness has become an integral part of the Bank Iowa culture,â said Wolfe. âTo support the bankâs vision of helping our team members live healthier and more fulfilling lives, we have designed our new office location in West Des Moines to be purpose-built around continual movement and the maintenance of healthy choices. It was also important for us to generate feelings of a happy âwork homeâ to support the emotional well-being of team members. Itâs our belief a work home can be designed as beautifully as a residential home.â

Individual desks in the Bank Iowa headquarters integrate with a mobile app that allows team members to pre-set standing and sitting heights. The app also alerts users with reminders to change positions throughout the day. In addition to their individual app-enabled spaces, Bank Iowa team members have the option to work in collaboration rooms or single-person enclaves. The later provide a quiet space for people working on projects that may require highly focused, uninterrupted time.

Other components of the healthy lifestyle incorporated in the offices include a wellness room, water refilling stations, healthy snacks, a communal Bank Iowa tandem bike and a bike storage rack for team members who cycle to work.

With more than $1.3 billion in assets, Bank Iowa ranks as one of the leading independent ag banks and the second-largest family owned bank in the state. Farmers, families and businesses access Bank Iowaâs products and services through 25 locations in 22 communities, as well as online and on mobile devices. To learn more, visit bankiowa.bank. Member FDIC. 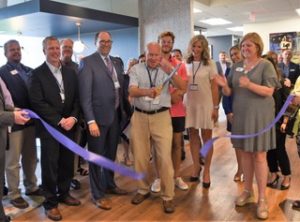