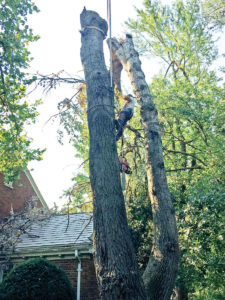 We sit on the bench. Both of us mouths open, heads leaned back, eyes wide. Glazed donuts melting in our hands as we watch. Clearly, no parent is in charge of the two of us. We grab a second donut before the show really begins.

BIG TREE CUTTING. . . starring tree cutters and a crane operator and a cast of thousands.

Alex Wickett is my buddy for the day. We sit 6 feet apart in distance and 53 years apart in age. Heâs too young and inexperienced, and Iâm too old and banged up. So weâre benched.

We are sitting together because Alexâs grandfather, John Fogwell, is high up in the tree. Heâs harnessed in with ropes. He has tools strapped to his waist. Both boots are cleated and sunk deep into the bark. A chainsaw dangles from his belt, which he periodically grabs to cut off 3,000-pound chunks of tree. His sweat is all that falls without ropes.

I want to yell up and ask whether he sees any pirates on the horizon. Alex would appreciate that. But I need a few more years on me before I can be comfortable with such hilarious humor.

The other person we watch is the crane operator. He has threaded his crane between flower beds and drainage tiles and bushes, planted the stabilizers on giant wooden blocks, and slowly telescoped the crane high above the tallest trees. He carefully lifts off the cut portion and slowly maneuvers it to the ground to put it to bed in a large flatbed trailer. It is a dance involving enormous weights, spinning cables, and deft, small movements of the operatorâs hands.

In other words, itâs magic. 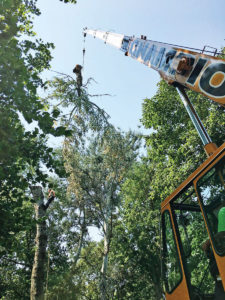 âIâm actually afraid of heights,â I tell Alex between donuts.

I didnât really know I was afraid of heights until I was up on top of my old two-story house trying to repair a few shingles. I did the repair and then froze. In total terror. I couldnât get down. I couldnât move forward or back. I wanted to cry. My only question â could they send a helicopter?

Clay Grubb was my neighbor back then. He worked for the post office. Quiet and unassuming. He moved with grace and laughed easily, but I never saw him put on a cape or reference his superpowers. Not once.

Clay saw me frozen high on the roof. He began talking to me in his soft, unassuming voice.

I scream that Iâm seconds from screaming.

âGood,â Clay says encouragingly when he sees that this is going to be a long day.

âNow slide your right knee back a few inches.â 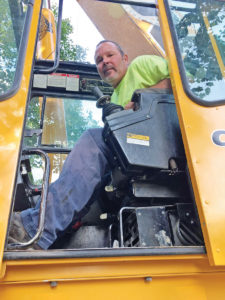 The crane operator, Kendel Laughman, leans back in his cushioned seat shaped like a World War II cockpit and slowly lifts the top of the tree high into the blue. He gazes out the open skylight cut in the roof of the cab. The damage from the storm is already done. Most streets are passable. Power is on. Today all he needs to do is take a tree off a roof without tearing a hole in the house or ripping up the shingles or dropping the tree on anyone. Piece of cake.

So, Kendel, isnât this dangerous?

âListen, I have one goal in my job. At the end of the day, I want everyone to go home safe.â

I go back and sit with Alex.

âI donât like going up in a Ferris wheel,â Alex volunteers.

Of course, who does?

Alex and I take another donut. ♦

Joe Weeg spent 31 years bumping around this town as a prosecutor for the Polk County Attorneyâs Office. Now retired, he writes about the
frequently overlooked people, places and events in Des Moines on his blog: www. joesneighborhood.com.