Giants in the earth 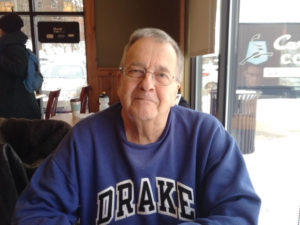 âThere were giants in the earth in those days.â Genesis 6.4.

Yup, thatâs what the Bible says â giants. The heroes of long ago. The great men and women of the past. Solid folks. People you could rely on for a lift to the grocery store or to give you a little help if your drain was blocked. Men and women of renown.

And the giants today?

The email arrived with a ping.

â55 years ago on May 1, 1963, I played my Senior Clarinet Recital at Drake University. As I was about to go out on stage, scared to death, my clarinet prof, James Luke, gently pushed me on my back saying âMay Day! May Day!â â

Kind, self-reflective, funny. David Twombley began writing me emails in 2014 in response to my columns in CITYVIEW. Many emails followed. Some long, some short, some to many recipients, some just to me.

âI am a âretiredâ instrumental music teacher; taught for 37 years in public schools. I am currently still playing clarinet in two groups here in the Des Moines area and, for the sixth year, teach part-time at Valley high school and Southwoods, the freshman building in the system.

There is NOTHING more satisfying than working with youngsters and seeing their world change when they realize what Music can do for them.â

Which, of course, brings us to Chief Justice Mark Cady in Varnum v. Brien.

âThis lawsuit is a civil rights action by twelve individuals who reside in six communities across Iowa. Like most Iowans, they are responsible, caring, and productive individuals . . . They include a nurse, business manager . . . and two retired teachers.â

Two retired teachers? They werenât hard to spot in the crowd. Over there across the room is David Twombley and his partner Larry Hoch. Having committed most of their life to teaching, they found each other in retirement. And together they decided âenough was enough.â They became part of the infamous twelve.

âThe twelve plaintiffs comprise six same-sex couples who live in committed relationships. Each maintains a hope of getting married one day, an aspiration shared by many throughout Iowa. Unlike opposite-sex couples in Iowa, same-sex couples are not permitted to marry in Iowa.â

Clear, concise, matter-of-fact. Chief Justice Cady didnât mince words. Then he reminded us what it means to be an Iowan, in case we were distracted by our smart phones and forgot to look up.

âIn the first reported case of the Supreme Court of the Territory of Iowa . . . we refused to treat a human being as property to enforce a contract for slavery and held our laws must extend equal protection to persons of all races and conditions. This decision was seventeen years before the United States Supreme Court infamously . . . upheld the rights of a slave owner to treat a person as property.â

And if that wasnât enough, he followed this with examples of the Iowa Court dealing âblows to the conceptâ of segregation and supporting the rights of women.

âIn each of those instances, our state approached a fork in the road toward fulfillment of our constitutionâs ideals and reaffirmed the âabsolute equality of allâ persons before the law as âthe very foundation principle of our government.â â

This brings us to the topic at hand â same-sex marriage.

âHow can a state premised on the constitutional principle of equal protection justify exclusion of a class of Iowans from civil marriage?â

This is like your dad asking if it was a good idea to back the family car into the side of the garage. Perhaps it is best not to answer.

â[T]he right of a gay or lesbian person under the marriage statute to enter into a civil marriage only with a person of the opposite sex is no right at all.â

Iâll translate that for you â sometimes that argument that sounds good in your head should stay in your head.

âWe have a constitutional duty to ensure equal protection of the law. Faithfulness to that duty requires us to hold Iowaâs marriage statute violates the Iowa Constitution. To decide otherwise would be an abdication of our constitutional duty.â

There you have it. Chief Justice Cady approached the fork in the road and chose the path of equality. Nobody on his watch is going to be left out in the cold. 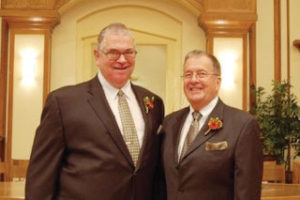 But what happened to our retired teachers, David and Larry?

âWe were married in September, 2009.â And David attached a smiling photo to his email.

All lived happily ever after.

Life goes on. It is never the end until it is actually the end. With the recent death of Chief Justice Cady, all three men have passed. Each too early. Each leaving victories and defeats and battles un-fought. But each leaving a mark that made Iowa a little better.

For me, itâs been one year with no emails from David waiting in my in-box. An empty spot at the table. So, like many of you at the beginning of an Iowa winter, I look back to warmer days.

âSqueeker our cat has 3 strikes against him: heâs gay (at least he lives with two gay men), black, and handicapped. He is inside, except for our morning âconstitutionalâ when we go outside; not on a leash, and he explores around the yard and eats grass â Larry thinks he is crossed with a cow! He is a delight: very affectionate, and wants to be with us all the time. Larry says he is a dog in drag, as he seems to be more doglike than the typical stereotype of a cat. He is the most loving cat Iâve ever had . . . He will be missed very much when his âtimeâ comes, for sure.â

âGiants,â the Bible called them. They are missed very much. For sure. ♦

Joe Weeg spent 31 years bumping around this town as a prosecutor for the Polk County Attorneyâs Office. Now retired, he writes about
the frequently overlooked people, places and events in Des Moines on his blog: www. joesneighborhood.com.