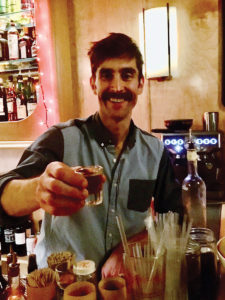 âSo, you want to try the Fernet?â the bartender asked as he leaned across the bar with a small shot of dark liquid.

Although, I must admit that Iâve never quite taken to serious drinking. Years ago, an old prosecutor offered me a serious drink out of a flask as we chatted outside our motel rooms in western Iowa.

âYou have a flask?â I asked, more excited about the container than what was in it.

I didnât want to tell him that the closest thing to a flask Iâd ever drunk out of was a canteen full of Kool-Aid belonging to my fifth-grade buddy Bill. And usually Bill and I were sitting in a plywood fort up in a tree where we drank out of his âflaskâ and ate bologna sandwiches on buttered white bread.

Iâm not stupid. After one swallow from the old prosecutorâs flask, I knew not to drink it while up in a tree.

Bartender/Owner Dave Murrin-von Ebers offered me this free taste at his new bar on Ingersoll called The Bartenderâs Handshake.

âA bartenderâs handshake is a shot you would do with your bartender and also a term for shots a bartender likes to take. Fernet Branca is one of the more popular ones. Earlier in my career, Jamison was the go-to shot.â

A sip of Fernet courtesy of Dave. Delicious. A free taste. Like an amuse-bouche from the chef before you order dinner, or a complimentary digestif at the end that deliciously burns away your insides, or that wonderful sour cream dip handed out free with a few chips in aisle eight at Hy-Vee.

âMay I try two flavors?â I always ask the Hy-Vee lady in the white apron.

A taste over here. A gift of lotion in a mailer over there. A cookie with your coffee. An extra sample in your bag. A surprise in a box of Cracker Jack.

Back when I was a much younger man, my wife and I thought our three kids were spoiled rotten. Which they were, thanks to their enabling father. So we decided that they should help give out food on Saturday mornings under the auspices of the Catholic Worker House. This was based on some ill-advised notion that our kids would learn gratitude and humility and love by way of service.

Of course, it was a total failure. 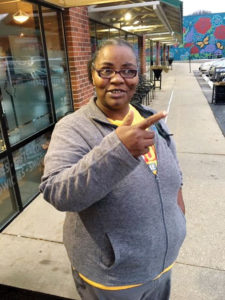 The first day at the Catholic Worker House, I met Carla Dawson. Tough, no-nonsense, hard-working. Her booming voice greeted us at the door like a linebacker. And her hug rocked my kids off their feet into a limp pile of giggles.

After this introduction, Carla stood back and sized me up â and I was clearly lacking.

She handed me an apron, gave me a gentle push, and off to wash dishes I went with her loud laugh echoing around the small kitchen to my kidsâ delight.

My kids peeled off over time, but I stayed for those Saturdays. Not because I was interested in doing good. Nope. I was interested in being around someone who did good. Loud and brassy and full of love, Carla created a world that took care of people. And it was all free for the taking.

âWeeg, this woman needs some extra help, go grab those vegetables in the back room.â

âWhat are you doing, sister? Come here for a hug.â

âOpen those doors, Weeg, weâve got a big crowd and theyâre cold. Why are you sitting down?â

And I would get the vegetables and see the little girl squeal with delight at the hug and rush to open the door. Just as ordered. And Iâd watch Carla scatter the gifts of herself like candy at a Fourth of July parade. A little love here, a little push there, a little encouragement wherever it was needed.

After a short while, I moved on. And years later, Carla moved on also. Community Youth Concepts is her new hangout, where she continues to do good for young people in a new space.

But, honestly, I miss her bossing me around.

Although I donât doubt she is still who she is â one part sassiness and three parts love. Next time ask the bartender for that.
The Carla Dawson Handshake.