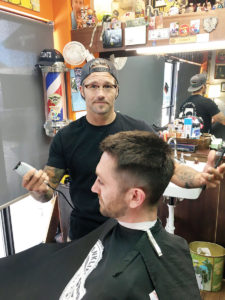 Smacked broadside by a car at the top of a hill, I was 5 years old when I had my first bike accident. I was so embarrassed, I limped home and kept my bruised body and the ruined bike a secret. My first embarrassment.

And that was just the beginning of a lifetime infatuation with being embarrassed by pretty much everything â bad acne, angry scars, large ears, gurgling stomach, big nose, thick glasses, and not one iota of fashion sense. I was a petri dish of multiplying embarrassments.

But Iâve never thought to be embarrassed about my bald head.

The group of middle-aged women and I were working out in the same area of the gym. They were doing a class that is hard â hand weights, core exercises, jumping jacks. They are strong women, tough and totally dedicated. I admire them.

I was over in a corner pulling on a rope â dripping sweat. A great old-guy workout.

In loud voices, the women began to talk about hair loss in men. Typical stuff. Laughter at the combover. Husbands beginning to thin up top. And then a non-joking pronouncement: âWhite men who are bald are not very attractive.â It was said as a matter of fact. Apparently, itâs common knowledge. Everyone knows this. Duh.

I was immediately sorry for my wife. Perhaps those vows from a gazillion years ago actually said, âTo have and to hold from this day forwardâ¦ until hair doth depart.â She must be holding on to this hairless relationship because of the dogs. Who knew? 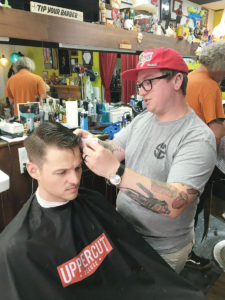 And what about my adult kids? Shamed by their dad. Left to wonder if they will lose the genetic lottery and inherit not cancer nor mental health concerns, but baldness. The scourge that reaches beyond class and wealth and even beyond my deep love of popcorn.

A sad state of affairs to be sure.

But, and this is probably wishful thinking, what if the hard-bodied women are wrong? Can a man be bald and still hold his shiny head high?

So I went to talk to the pros at Franklin Barber Shop, a funky barbershop in Beaverdale that advertises itself as a âtraditional barber shop with classic cuts and close shaves.â

I open the door to the sound of buzzing barber clippers, muted conversation and a warm welcome. A safe haven for bald men.

âWe deal with a lot of baldness here at the shop, and because we do straight razor shaves, we have quite a few customers where we shave their heads,â says Brian Garrett.

Brian, who has cut hair for nearly 15 years, is matter of fact about the existential nature of hair loss.

âCustomers come in upset about their hair loss, but once they talk to us, Iâll suggest, letâs just shave it. Try it. Once they do, they think, âThis is better than having those five hairs â I do look all right.â Itâs liberating. They look GOOD. Those five hairs were setting them off.â

Ryan Heckart, the barber working the next chair, is in total agreement and touches on the celebrity angle to baldness.

Statham, an actor popular in many action movies, is balding with his remaining hair buzzed to a nub.

But what if your head is not shaped right, or baldness ages you by 10 years, or your forehead blends into the sky in photographs?

âQuit making excuses,â says Brian from his chair, âjust go all the way. Your head is yours.â

Great. But what about the preference for hairy men by the hard-bodied women in the gym? I mean, donât they count in this analysis? Canât they have their own personal choice about beauty, which, by the way, we all do?

âWho cares what they think!â shout both Ryan and Brian, loudly and simultaneously and a little more profanely.

A guy by the name of Matthew Arnold, a 19th century English poet said: âBald as the bare mountain tops are bald, with a baldness full of grandeur.â

So there you go â baldness: shameful flaw or full of grandeur?

Hmmmmâ¦ I think Iâll go with option 2, full of grandeur. Why not? ♦