What is the difference between somebody we know for a long time and a person who is a new friend?

They laugh. And not just with their mouths, like your teenage kids do when you tell a joke. Instead, their eyes sparkle, tear up, close tight and sparkle again. Even their ears twitch. I mean real laughter.

And everyone and everything is fair game for their laughter: the President of France, their age, marriage, religion, Frenchmenâ¦ and me. 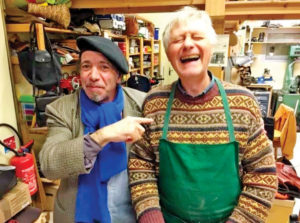 âWhere are you from?â they ask.

Really? Are you kidding me? This is the level of our humor today? I canât help but smile.

This all began simply enough. I needed to find a leather-bag-repair-shop in Carcassonne, France. Apparently, I had stuffed one too many bottles of wine, hunks of cheese and loaves of bread into my little leather bag, and the strap snapped in complaint. A shoe-repair store seemed the ticket. So I found Cordonnerie Traditionnelle. 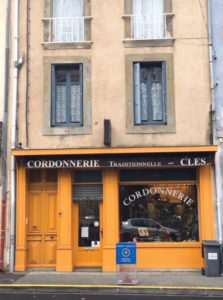 âToday is a special day. I kiss you.â

I guess this is what happens at a French shoe-repair store. Heck, what would have happened if I brought in boots to repair?

The traditional French kiss, left cheek then right, came from Mokhtar Bendahmane. Mokhtar had been called in by the shoe-repairman, Emmanuel Delcambre, to translate for us.

âMokhtar, can I take a picture of you and Emmanuel?â

âExcuse me,â Mokhtar says. And he takes off to the back room.

Did I offend him?

Shortly, he returns dressed in a beret, a jacket, and a blue scarf.

What? You have French picture props?

He and Emmanuel are once more driven to laughter by Mokhtarâs antics.

Mokhtar begins to translate for us as I ask Emmanuel questions.

âI only repair shoes and pieces of leather for horses. I have been here 25 years. I am 68. For 22 years, I lived in a community. The aim was to live a Christian life and experiment with another kind of society, living an orthodox life with less power.â

Emmanuel looks like an ascetic monk dressed as a shoe repairman. I point this out to Emmanuel.

âThereâs a story we tell to kids,â Emmanuel says. âSt. Antoine goes into the desert and survives on almost nothing. He is the classic ascetic monk. One day an angel comes and says to St. Antoine, âYou are a great saint. I bring you to Cairo. Iâm going to show you to someone.â The angel took him to a shop of a very poor shoemaker. The angel says to St. Antoine, âThe shoemaker is a greater saint.â â

St. Antoine is flabbergasted and in total disbelief. 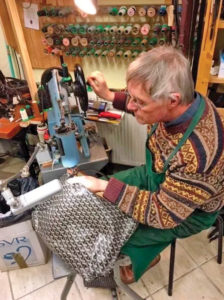 âI am not the shoemaker, by the way,â Emmanuel quickly adds.

âHe is that close,â says his friend Mokhtar gesturing with his hands inches apart.

What about your job, Emmanuel?

âWhen I started this job,â Emmanuel says, âI discovered I was the king of the world. Because by this work, I can eat, my family can eat, I do something I love very much. I love working with my hands. It varies each day. I have no boss above me. One day a woman slapped her small son in my shop. I told her she would have to leave if she did that. I can allow whatever I want in my home.â

âHe can dance when he wants,â Mokhtar adds. Of course, this observation required that Mokhtar dance a small jig.

It is time for Emmanuel and Mokhtar to get back to work. But Mokhtar leans in before leaving:

âOne journalist asked the Dalai Lama, âWhat is the difference between somebody we know for a long time and a person who is a new friend?ââ

Mokhtar gives me his last smile.