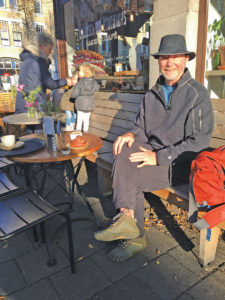 It is with some shame that I acknowledge that Iâm a fan of BrenÃ© Brown, a shame researcher. I donât want to be a fan. She is way too popular, way too smart, and way too much a clichÃ© for the manly man Iâve always striven to be. âJeremiah Johnson,â the old movie Western from 1972, is my role model for a man. A stand-alone guy. Tough. Gutsy. And able to survive against all odds. Yup, thatâs me. A Mountain Man.

Oddly enough, the âMountain Manâ approach hasnât worked that well for me.

When the old prosecutors, after a day of trial, would say, âJoe, letâs have some whisky to celebrate,â Iâd look around the bar to see if they serve chocolate maltsâ¦ with maybe a little whip creamâ¦ and a cherry.

âWhat about those Cubs?â every man in America asks at the water fountain. And I unerringly respond about this Chicago baseball team with questions like, âDid the Cubs score a touchdown last Saturday?â

And how about fixing a car, or pounding a nail, or cranking a wrench? Sorry, my wife still watches the neighbors with envy as the husbands fix and hammer and repair while Iâm doing rolling-like-a-ball in Pilates class. Nope, Jeremiah Johnson I am not.

Which, of course, gets me back to BrenÃ© Brown, who advocates embracing your vulnerabilities as a pathway to dealing with shame. Of course, who wants to do that? I certainly donât want to embrace anything but a donut. But facing uncertainty and risking yourself is apparently the ticket out of the shame party.

Thus, the FiveFinger Vibrams. You know what Iâm talking about. The totally dorky shoes that have five toes splayed right out there for the world to see. I love them. I could argue to you that since I was in an accident, they allow me to feel the ground in a way that gives my numb feet some balance. That would be true. But, really? I just love how they feel. Period.

But donât get the wrong idea, they are the opposite of cool. One of my Dutch friends is Margreet. She is kind but unfailingly honest. For instance, she asked me when I first arrived in Holland why I had grown so fat. You try to answer the âwhyâ of that question. When I asked her about my FiveFinger Vibrams, she said I should do what I want, but the shoes are âa little strange.â This is from the most tolerant people in the world!

And I donât stop at shoes; I also love hats. Pretty much any kind of hat. And since I have a large head, and the wind blows incessantly in the Netherlands, hats generally perch precariously on the top of my head unless I tie them down with a nice string around the chin. Very stylish while you bikeâ¦ and very similar to hats worn by circus clowns when they are peddling around the ring on their unicycle while juggling balls. I know this. I asked Margreet what she thought of my hat. âThe string around the chin? Really?â She shook her head.

Ah, but then I got a physical challenge. My therapist (that acknowledgement alone kicks me out of the Mountain Man Club) said sheâd love a picture of me at an outdoor cafe in my shoes and hat. Really? Both at the same time? Here in the Netherlands?

So, here I am, sitting at a cafe on Fredrik Hendriklaan, The Hague, Netherlands. Yup, Iâm the guy in the funny hat and funny shoes. Possibly scaring those small children to my side. ♦