Heâs not your traditional food critic. 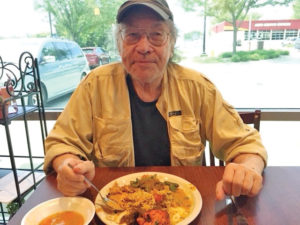 âThe guys running this restaurant are from Hyderabad, India.â

Now you just have to wait for it, folks. Thereâs always more. His mind is sparking and firing and making connections. Wait, wait, waitâ¦

âHyderabad is to India, food-wise, what Parma is to Italy and Lyon is to France and Barcelona is to Spain. Itâs where it happens. Osaka to Japan is probably the best example of all. Osaka â you were forbidden royal pleasures or military pleasures, so the only thing to spend money on was food and entertainment. And therefore thatâs where it happened.â

As I sit with him eating Indian food, I am not surprised that the conversation, in just a few sentences, travels from Des Moines to India to France to Spain to Italy, and then somehow ends up in Japan. This is just Duncanâs mind at work. Connections teased together over a life of travel and stories and writing.

And if you wait a bit, his sly humor will sneak in the door.

So, you graduated from Roosevelt High School?

âI never got anything but Aâs at Roosevelt. I got screwed. I had a perfect grade point. I took the toughest courses, and yet I ended up seventh in my class. Tied for first, but they rated me seventh.â

âThey justified it as a character issue,â he says with just the ghost of a smile.

Of course, he has character issues. Duh. Itâs why Iâm sitting there with him. And if you look closely, usually on the edges of his columns in this magazine, this same understated, self-deprecating humor eventually appears.

âGrowing up in Des Moines during the 1950s and â60s, I graduated from college before I knew what an avocado tasted like. Ashamed that I did not know what this fruit was when first offered one, I bit into it as if it were an apple, skin and all. I then claimed I was âinto whole foods.â Des Moines has changed a lot since then.â â Jim Duncan, CITYVIEW, 2015.

A grizzled man of 71. Hat pulled down over his long hair. Glasses slightly ruffled. Gentle eyes that have no room for cynicism or negativism or pre-conceived labels. He scans past me taking in the bustling restaurantâ¦ my guess, heâs looking for hooks to piece together a story. A smile blossoms. Ah, he must have found someone with a story that needs telling.

Duncan has been doing this for 30 years. No kidding. Of course, in that same amount of time the Thirty Yearsâ War began and ended, Saturn went once around the sun, and maybe, with some luck, you paid off your 30-year mortgage.

âTwenty-five years ago, this publication began subjecting readers to the reflections of an alcoholic who had recently quit drinking. I thought that gave me an alternative point of view, and editors agreed. At that time, this paper was named Skywalker.â – Jim Duncan, CITYVIEW, 2013.

That piece of writing from five years ago was not hyperbole. He pitched CITYVIEWâs publisher at the time, Connie Wimer, on a column that looked with fresh eyes at a world that was quickly changing.

âI always thought Iâd be a writer. It took me a long time to actually become a writer. After high school, I only applied to one college, Harvard. And I did not get accepted, which was inconceivable. I had no plan B.â

Duncan laughs softly at his naivetÃ©.

He ended up graduating from the University of Wisconsin. Due to the nature of his major in South Asian Studies, he spent a semester each at five different universities, and then a year in India â where he did a thesis on, of all things, variations in curry found in Indian villages separated by mere miles.

It is no surprise that after graduating he began to seriously write about foodâ¦ and art and sports and sustainable agriculture and anything else.

âIâve always had an interest in food. I started cooking my own meals when I was 10. I said something critical to my mom, and she said, âWhy donât you just do it yourself?â And I did. We were both happy.â

And now youâre a food critic among other things.

âTrue, but I am not a traditional food critic. I have way too much sympathy for restaurant owners. Itâs a brutal business without big margins. I know how hard everyone works. I donât want to cut people down who donât deserve it. Sometimes the kindest thing I can do is to not review a place. I want to tell our readers where they can find great food or unique food or something special.â

So, youâre a happy man, living the life you want to live?

âWell, I really wanted to be a basketball player.â

âListen, Iâm always just trying to tell a good story. And I like people. What can I say? If I didnât have stories to write, Iâd know fewer people and Iâd have a less rich life.â