We all need a reprieve.

The summer evening is hot and close. Steam rises up from the damp grass. Only mosquitoes and myself are out. I suspect folks are a little tired after the flash floods turned backyards and basements into water parks. I know I am. Lord, there are still mattresses and washing machines and carpets sitting out on the curbs. Water still runs from sump pumps. And the explosion of a flooded house a few blocks away gives a certain sobriety to the rain-soaked mess.

We all need a reprieve.

Thatâs when I hear the swishing sound of the street cleaner. Broad, circular brushes polish and shine the concrete curbs as I follow behind on the quiet street. Itâs just me and the driver. He waves with two fingers â never breaking his downward gaze.

Yup, itâs the night before the Urbandale parade. 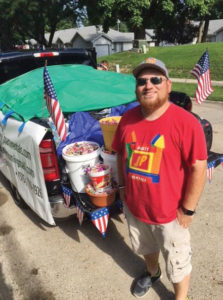 Paul VanCleave of JP Party Rentals is standing next to his pickup truck early the next morning.

âWe specialize in unique and exciting inflatables and concession items. Weâve been in business about three years.â
Great. Good to know. But here you are in Urbandale in the early morning with a pickup full of candy and water. Are you a crazy man?

VanCleve gives me an even wider smile.

âWeâre just excited to be a part of the celebration.â

And I am excited to see him.

I walk further up the street.

This next trailer full of candy is obviously a parade-induced hallucination. 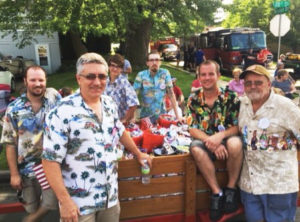 Larry Rogers and Chris Good are with Iowa Auto Repair, the business responsible for the screams of delight from the million kids lining the Urbandale parade route.

âWeâve been in business 36 years, and weâve been doing the parade for 30 odd years. This year we are pushing almost a half million pieces of candy.â Rogers says this with barely suppressed glee.

They are both so enthusiastic that I wonder if these two mature men got permission from their parents to be here.
âThis trailer was built by my business partner 24 years ago,â Rogers says. âIt gets used only for the parade. After 24 years, it has only about 200 miles on it.â

No kidding? But really, do you enjoy this year after year with the heat and the yelling and the glare of newly-polished concrete streets?

Larry and Chris. Chris and Larry.

And off they march, trailing candidates running for various offices, young dancers with spider-like balloons hooked to their backs, and a truck that pulls portable toilets. 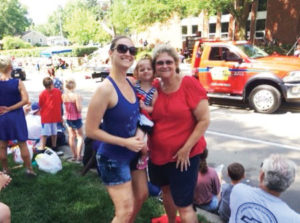 As I stand on the sidelines, I notice three women cheering next to me. Well, two women cheer. The third woman-to-be sits in her momâs armsâ¦ with a fistful of candy.

Have either of you ever marched in the parade?

Laughter â apparently that is a silly question.

Mallory, Kristinâs daughter, fills me in.

âAnd you marched with baton and gymnastics,â adds Kristin.

And given the smallest member of this group, who refuses to release her candy while in her motherâs arms, I donât believe their marching days are near done.

Ah, thereâs the red-nosed clown and the ringing of church bells. The parade comes to an end.

Everyone packs up their blankets and lawn chairs and coolers of water. Small children carry full bags of candy that drag behind them on the ground. Neighbors laugh and talk and wave goodbye.

I walk home on the now-quiet street, bending now and then to retrieve a forgotten piece of candy and smiling for no reason at all. ♦