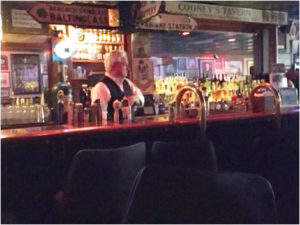 âI donât do interviews,â he says without a smile. His eyes sweeping both sides of the bar while he pours the beer.

The timbre of his voice catches me by surprise as it rumbles softly across the room like the early hint of an Iowa thunderstorm, dry and gravelly and deep.

âLetâs not call it an interview,â I say, with a nod toward my former life as a prosecutor.

He shakes his head, unimpressed by my sly interrogation tactic, and draws another beer for a customer.

Letâs seeâ¦ pressed, long-sleeve white shirt. Check. Black vest. Check. White apron turned just so. Check. White wavy hair. Check. No-nonsense, down-turned mouth perfect for dead-pan deliveries. Check. And stories about anything and everything, if you can get him to talk. Check. Oh, yes, he pours drinks at his bar called, of all things, Cooneyâs. Check and check. 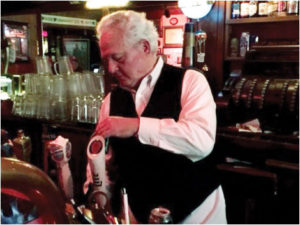 âThe Irish bartender.â In the flesh.

Cooneyâs Tavern has been around for more than 30 years. It anchors the north end of the Beaverdale neighborhood in a small commercial strip on the west side of Beaver Avenue. Youâre not going to be impressed by the outside. But open the door. Yup, it feels like a dip back into an earlier time, a better time. Old bricks that make up the wall come from a parking lot near North High School. Table tops are marble wainscoting from a downtown building that was demolished. The backbar is pieced together from small-town Iowa bars long abandoned. And signs â old Irish road signs, old Irish pub signs, Cooney signs. All original. All speaking of another time and another place, which, of course, is now this place.

And a front bar that is dark and deep and a mile long.

By the way, Cooney may be reluctant to speak about himself, but he is not reluctant to speak out. There was
a time, not so long ago, when he was concerned about the smoking in his bar. His uncle had been sending him
literature about the dangers of second-hand smoke for more than a year. So, one day he went to a hearing at the Iowa legislature and spoke in support of legislation banning smoking in places like his. But it didnât go as planned.

âSomebody asked me at the hearing, âIs your establishment nonsmoking?â And I had to say no. So basically that person called me out. âYou can talk the talk, but you canât do the walk.â So, what am I going to do? Iâm driving back, mulling over this stuff, would I do it on my own? Not sure.â

Cooney says he got back to his bar, opened it up at the traditional 2 p.m., and one of his night bartenders
appeared.

âMandy is here. I asked her why she is here this early. She said she had to talk to me.

âShe said, âIâm pregnant, and my doctor said get out of that smoky bar. So Iâm giving you two-weeksâ notice.â

So, more than a year and a half before the Iowa legislature acted, Cooneyâs Tavern became nonsmoking.

âWe can thank Vincent, who is now 10, for turning us nonsmoking,â Cooney laughs.

Cooney suddenly stops scanning the bar and looks directly at me.

âI just want to stress that Cooneyâs Tavern wouldnât be here without a group of dedicated bartenders and loyal customers.â

I look around at the people drinking and visiting at 3 in the afternoon on a school day. Cooney calls them all by name, knows exactly what they drink, how many drinks they drink, and when to bring their drink.

Itâs like watching a Paris waiter at work. Understated professionalism. 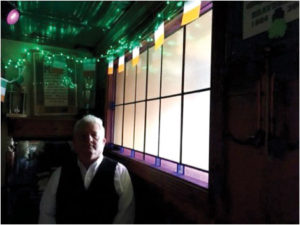 So, Cooney, what about those blue and purple windows up front?

âThose windows up there? I got those in ninth grade. I was working for a neighborhood contractor, and I was cleaning up the job site near Holy Trinity. Those windows were out of the church hall. Nobody wanted them, and theyâd been thrown out. And so I took them home and put them in the basement. They were there for 10 years.â

Cooney draws a beer for a fellow down on the west end of the bar. He returns and continues.

âWhen I first brought the windows home, my dad asked, âWhat are you going to do with these?âIn ninth grade, I said, âIâm going to put them in my neighborhood bar.ââ

Cooney smiles to himself for a brief moment and shakes his head.

And with that, Cooney goes back to work, as the afternoon light shimmers through the window and splashes purple and blue against the bar. ♦