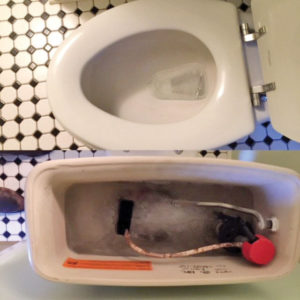 Yup, there I am, minding my own business after the holidays, watching our adult kids go back to their own lives, putting away holiday decorations for another year, and feeling the gentle quiet of a cold Iowa winter settle peacefully around our retired lives. Meanwhile, the dark underbelly of bad luck was stirring. Our little hired-manâs house in the middle of a cornfield, our beloved getaway, was busy turning itself into an ice cube. Frozen solid.

How could this happen in a time of Siri and Alexa and drones? Whereâs Big Brother when you need something besides a traffic ticket? At a minimum, I expected the minions from Dakota Access Pipeline to notice something amiss in their frequent helicopter flyovers near our home to check for leaks in their unleakable pipeline.

And how could this happen in the first place?

Well, have you ever seen those big tanks next to houses in the country? No, they are not the same as the tanks you see at the local brewery. The tanks next to houses are propane tanks. When they run dry, the heat in your house stops. And when the heat in your house stops, and itâs -3 degrees outside, the goldfish in the bowl need to head south. Quickly.

So, of course, it is a late Friday evening. Everyone has left work. And we walk into a very cold house. My wife, the brains on our team, notices the faucets wonât turn and calls the plumber.

Jason Anderson, our plumber, says, âOh no. Is the water in the toilet frozen?â

My wife looks. âYes,â she says.

Hurry down to the basement â âNope! And, by the way, the water in the coffee maker is frozen.â

âOh no, it looks like youâre out of propane, and the pipes are frozen. Itâs too late.â

Yikes. âToo late,â said by a plumber is worse than coming out of surgery and being informed they took one look inside, saw it was hopeless, and closed you up again. There is no holy Lourdes Water to cure frozen pipes.

My wife and I can see our breath as we sit in our living room waiting for the propane truck to arrive. We pour water from our water bottles into the dog bowl for our thirsty dogs, and we pull our hats down a little closer and add another layer of mittens. We shiver.

The water in the dog bowl freezes.

My wife calls Jason again. He tells us that we need to turn off the water to the house because once there is heat, the pipes will thaw, and we will have leaks everywhere. I get it, if we donât want to start a hydroponic farm in the bedroom, we need to get the water off.

But the faucet to turn off the water is frozen. There is no turning it off.

Ah-hah, Jason has a solution. We need to turn off the water from the outside of the house, from the water pit.

Great, I can do that. 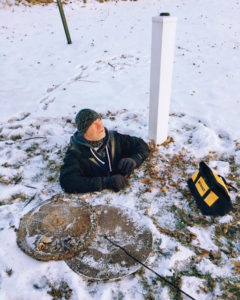 One small problem, what exactly is a water pit?

It turns out that on the other side of the creek is a manhole that goes down to the rural water shut-off valve. The manhole is camouflaged by snow. Iâm told to go down this hole with a pipe wrench, turn the knob clockwise, and then climb out of the hole. Easy as pie.

Now is a pipe wrench actually shaped like a pipe?

Luckily, our neighbor, Beau Perry, stops by. Beers for both of us in hand. He knows what a pipe wrench is and actually owns one. He gets his tool bag, we find the manhole under the snow, we pop the lid, we pop theseal under the lid, and look down in the darkness.

It looks a long way down. What else would like the warmth of such a lovely hideout? Duh, snakes, skunks, and alligators. Oh my.

We decide itâs too cold to open the beers.

Beau offers to go down in the hole, referencing my advanced age. Not a smile cracks his lips. Clever for such a young man.

I take the pipe wrench, slide into the hole, and balance with my elbows resting on the edges and my legs dangling in mid-air. Afraid to drop down. My wife comes out and takes a picture of her foolish husband.

One more photo to add to a thick file.

Eventually, I drop the couple of feet further into the hole and turn the knob clockwise. It works. The water is off. The house is saved from becoming a lap pool. A victory for the good guys. Yahoo.

Ahhhh, there remains a tiny issueâ¦ I canât get out of the hole.

Listen, I know this isnât like being bombed by North Korea or waiting in a really long line at Starbucks, but I panic a little bit. Thereâs no place to get a grip on the sides, and Iâm not agile enough to pull myself out. I can only dangle. Forever. With snakes and skunks and alligators for companions. Hoping for an early spring.

After watching my predicament for a while, apparently entertained by my bobbing in and out of the hole like a jack-in-the-box, my wife and Beau decide to grab under my armpits the next time I surface and give me a boost.

With a few grunts, I am saved. A happy ending.

But Iâm getting sidetracked.

It was so coldâ¦ the water in the toilet froze. ♦