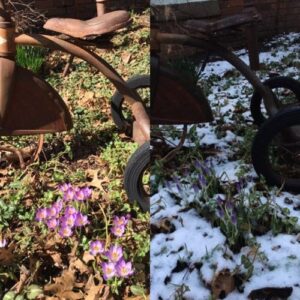 The rain drizzles against my hat in a steady pat-pat-pat. It canât decide whether to come down in a torrent or to give up and go back home. Perhaps itâs waiting until a May wedding or a fun Fourth-of-July picnic or that special barbecue with your sweetheart.

I fight to stay upright as my shoes slide across the mud on the washed-out sidewalk. After swinging to the left and dipping to the right, I amazingly donât fall. I raise my arms. A victory for old men everywhere.

But I do love rain, even though it is a fickle companion given recent floods occurring at the same time as recent droughts. All or nothing seems to be the only bet on the table with Mother Nature this past year.

But there is one reliable truth when it comes to rain â it will blow in your face. Iâm all right with that because, as usual, itâs all about the gear.

You have to be a smart dresser to be outside in the spring.

And it is Iowa. One day the flowers are just beginning to pop, and the next day Old Man Winter wonders whether weâve really shoveled our quota.

But today itâs just rain. When it first started, I could smell that earthy odor they call âpetrichor.â A great word. It sounds like the name of an ancient whale that rises up from the dank earth to return home to the ocean. 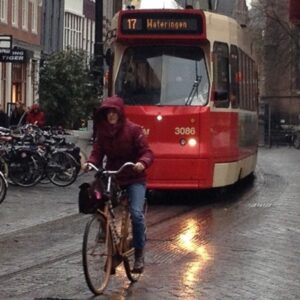 Iowa was once covered by oceans. Itâs been a while since there was actual water, but check out a bean field when the wind blows hard across the top in cresting, swirling waves. Or watch the head-shaking mystery of seagulls flying around the concrete parking lot at Merle Hay Mall.

When I was a young man I lived for a while in Estes Park, Colorado. Every day in the early afternoon, the bright blue skies would cloud over and a quick shower would sweep through the valley. If it was raining, it was 2 p.m. By 3 p.m. the streets were dry, pine resin was in the air, and no one would believe you if you told them there had been a deluge minutes before.

The tourists were a little outraged by this drenching â to the smugness of us residents. Although little did we know that later that summer the rain would come bursting down the Big Thompson Canyon causing death and destruction. A sobering wakeup. When I called my mom back in Iowa to tell her I was safe, she immediately contacted the local newspaper to announce the amazing news that her son, who was in absolutely no danger, survived. Moms did that back then. And the newspapers printed it.

When I lived in The Hague, Netherlands, the rain would settle in for several months. Usually, it was a gentle rain, but sometimes it would come in with the North Sea wind and rip up trees and tulips. A fierce storm.

But the Dutch ignore the rain. Up on their bikes, rain streaming off their faces, off to work or school they go.

And the kids? Along for the ride. Usually in the very front. No helmet and no hat. Like a hood ornament. No wonder little Dutch kids can save whole towns by putting their fingers in leaking dikes. Piece of cake.

Today the rain drips steady. The woods are damp and heavy. The country roads are mud. And the farmers are staring out their front windows with anxious attention. 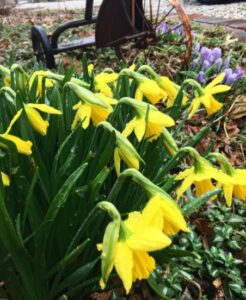 But the spring flowers?

And while the rain drizzles against my hat in a steady pat-pat-pat, I keep on the lookout for Petrichors. Word is that they can be found in Des Moines. Heading for the river, I suspect.

If you see one, call your mom. Donât worry, sheâll call the newspaper. And tomorrowâs headline?