He paints on anything 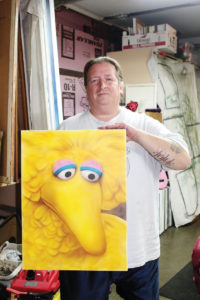 Shawn Palekâs work includes portraits of people, places and puppets, such as this one of Big Bird. Photo by Jackie Wilson

What do they have in common? All are items artist Shawn Palek has painted on. And thatâs just a small sample. Heâs painted dozens more, including murals, fine portraits and oil paintings.

Palek estimates heâs painted a whopping 40,000 paintings in his 33-year career. Nearly 5,000 include portraits â something he excels in.
Palekâs interest in art began when he first took art lessons in high school. Shortly after that, he met an airbrush artist and became intrigued with the craft. He took airbrush classes at DMACC and painted several album covers on denim jackets.

He completed a commercial arts program, managed an airbrush T-shirt business, and later opened up an airbrush and tattoo studio in Des Moines. Meanwhile, he was painting canvases, motorcycles and wall murals. One niche he specialized in was airbrush art at motorcycle rallies.

âI hung out with 10,000 bikers,â he remembers. âI was custom painting motorcycles and murals on nearly every single bar on the East side, and then 9/11 happened. It was devastating, since luxury items were the first thing to go.â

Palek frequently paints commissioned and freelance works. He also displays and sells his art at the Iowa State Fair, where he has won dozens of awards, including a best of show. He opened a gallery in East Village for a few years and now paints out of his garage studio in Slater.

At least 130 of his wall murals grace the central Iowa area. His largest mural was a 7,000-square-foot painting at Skate North. Recent murals can be found off the streets in downtown Perry.

âMural work is hard on the body,â he says. âI taught myself to paint with my left hand. I used to paint off an extension ladder, but that wasnât safe.â

Unique items painted on by Palek include an âAuthors on Literatureâ series, with famous author portraits or characters on their book, such as Ernest Hemingwayâs âIslands in the Stream.â Heâs taken old movie reel canisters and painted movie characters on them.

Another series heâs created is painting artists on paint palettes. One famous fantasy painter, Frank Frazetta, has a museum in Pennsylvania. Palek sent a palette portrait of Frank after heâd visited the museum. The Frazetta family notified Palek that his palette portrait will be displayed in their museum â a first for him.

âIt was the first time I wept as I was so moved by his paintings,â he says.

âI paint what I like,â he explains. âI have to find the right person who likes that painting. Youâre humping your name all the time to talk people into giving you money for your art.â

He says his success is usually word of mouth, and he treats it like a job.

âArtists rely on public affirmation and money to continue to create our art. Itâs wonderful when patrons appreciate what you do,â he says. ♦