Rachel Secretario Hill makes people happy with her comedy and her art. 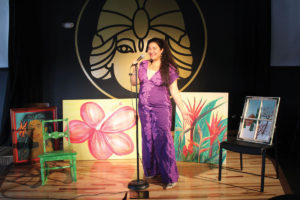 Rachel Secretario Hill poses in front of her art while wearing a vintage repurposed Hawaiian muu muu from the 1960s that has been sewn into a modern jumpsuit.

Ask Rachel Secretario Hill which career works best, comedian or artist, and, depending on the day, sheâll most likely laugh and say, âBoth.â

As a native of Hawaii, she formerly performed stand-up comedy. However, the gig usually didnât start until late evening. The arrangement worked, until she had a baby and could no longer do the late nights. Art seemed like a more suitable career, and she began painting in 2012 when she and her husband moved to Wisconsin.

Hill was pleased when she sold her first piece to a friend in New York City.

âShe purchased one of my Hawaiian flowers pieces and put it in her kitchen and hung it next to her other thousand-dollar art pieces,â she says. âIt was such an inspiration to me. They believed in me, and I felt, âI am an artist.â They bought five more of my paintings since then.â

Painting native flowers, such as bird of paradise and hibiscus, comes second nature to her.

âI wanted to bring a little bit of Hawaii and a little aloha to the Midwest,â she says.

Last year, Rachel participated in a âcherishâ event, where she painted chairs. The proceeds were donated to the Norwalk Library. She visited the Des Moines Botanical Garden and researched Iowa flowers, which she painted on the ornate wooden structures.

âI like that you can give spirit and new life back to an old chair,â she says. âYou can really see the grooves, nicks and details on the old chairs.â

Since then, Hill has painted custom chairs. One chair she painted for a friend was of her grandmotherâs garden and served as a memory and keepsake. Another painted chair was of a womanâs wedding bouquet. Long after the real flowers died, the wedding flowers stayed alive on the chair.

âI like the idea of flowers you donât have to water,â she laughs.

Hill also enjoys window painting, where she takes a basic window-pane frame and makes it appear as if you are looking out the window and witnessing the scenery. The paintings can be changed out, reflecting all four seasons. She incorporates bright colors in her paintings.

âWhenever I go back home, my friends comment, âWhy is it so green here?â The smell of the red ginger flowers takes over. Not everyone experiences that,â she says. âBy sharing my flower paintings, I share my love of Hawaii.â

Hill is now able to fit in comedy routines locally at Teeheeâs Comedy Club and Java Joes. Whatever she does, comedy or art, she wants people to be happy.

âBoth are a way to make people smile,â she says. âI love to make people laugh and help people have a fresh start to their day with bright colors.â ♦