Artist finds her voice, discovers her roots through painting. 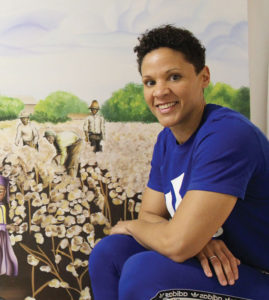 As a youth, Jill Wells accompanied her grandmother to painting sessions in a ladyâs basement, painting âwhatever,â varying from still life to outdoor scenery. Yet, when she attended Drake University for a fine arts degree, a professor helped her find her voice and infuse that into her paintings.

âI never thought of painting my stance on things or sharing my voice with others,â she says. âMy professors helped create and discover my roots for painting.â

Growing up in a small Midwestern town, black history month was ânon existent,â lacking exposure to her ethnic and cultural background. While at her college library, Wells came across old black history photos and felt the need to paint a scene depicting slaves in the cotton fields.

âI felt I could tap into emotion through these scenes, and I knew I wanted to paint it â to give a voice to those in the cotton fields,â she explains.

As a result, many of her paintings have a traditional cotton worker in the field, followed by a central figure in different garb. One painting portrays a girl in a graduation cap and gown, signifying her hope for the future.
At age 18, Wells painted a wall mural inside Creative Visions, an agency providing services for low-income minorities. Her mother knew about the art and didnât view the painting until after she finished it â for a specific reason.

âMy mom told me that my dad had passed away at that same location when I was 2 years old. She didnât want to tell me until after Iâd completed the painting,â she says. âFor me to have been brought to this place was an amazing coincidence. To leave a legacy here was very cool.â

In addition, other mural work has appeared in Des Moines. At the Blank Park Zoo, an underwater scene entices visitors. A mural at the Walnut Creek YMCA depicts swimmers in the pool. The adolescent wing at Lutheran Hospital offers a relaxing beach scene.

Wellsâ full-time job as a substance abuse counselor came to a halt when she became a full-time artist. Once she quit, things happened.

âI quit and gave it to God,â she says. âThen an explosion of work came my way. It was like an emotional breakthrough with my mindset. I tried to tap into it to conceptualize my painting with what I wanted to create and the emotions to deal with.â

During her full-time art stint, she âfound herselfâ and eventually returned to counseling at Orchard Place. She also teaches ASAP â After School Arts Program â to young kids.

She recently displayed art at the Waukee Arts Festival and The heART show at Woolyâs. Wells continues to take risks in art, as she learned from her grandmother, refraining from pigeonholing herself into the same look. Whatever she paints, she desires an emotional connection.

âIâll always work as authentic as I can. Iâm going to paint forever, no matter who sees it,â she says. âItâs part of who I am.â ♦