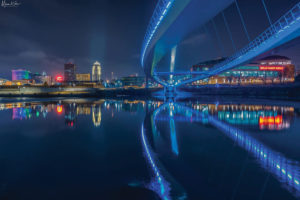 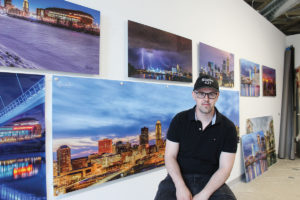 When Mirza Kudic purchased a camera four years ago, he quickly became obsessed. He snapped photos, stayed up countless nights, learning and perfecting his craft. After poring over images to check for lighting angles and
composition, heâd return to the same spot repeatedly to get the best shot. His dedication paid off.

A huge Des Moines skyline photo of his greets airline passengers arriving in the Des Moines Airport. He opened up a gallery at Mainframe Studios, where the inside is lined with stunning skyline photos of downtown Des Moines. One gigantic cityscape photo was stitched together from nine different images. Upon close inspection, you can see a kitchen and a bedroom inside the Plaza condominiums among the skyscrapers and the river.

A favorite is to photograph thunderstorms with bolts of lighting, but itâs rare to get it right the first time.

âOne night I spent three hours in a storm, taking 400 photos â and came home with nothing. I went to the bridge six times to take photos there, but the lighting wasnât right,â he says.

He started with a âcheapâ camera, and when he dropped his $200 lens, the plastic cracked. âI thought it was the end of the world. Now only the best gear will do,â he says.

In 2018, Mirza was awarded with an Iowa International Center Award, which recognizes immigrants in Iowa who have provided leadership and inspiration to others. He immigrated with his parents to the U.S. from Bosnia when he was 14 years old. Mirza shares his talent with other photographers. On his âWelcome to Des Moinesâ site, he suggested a photographer meet up at the Capitol to take photos together.

âThe idea was to get people away from their computers and talk in person. It went so well, 70 people showed up, so I did another one,â he says. âIâm now doing a 10th meet up.â

During the gathering, he discusses lighting, giving hands-on demonstrations at the free event. One person remarked, âArenât you worried youâll be training the competition?â

He replies, âI donât see a shot the same way others do. Thereâs no secret how a camera operates. The knowledge is there if you reach for it.â

In addition to taking cityscape photos, he does high-end real estate listings, pets and people. He still has a day job and doesnât want to do photography full time.

âIâm afraid Iâd resent it,â he explains. âIf I relied on it to pay bills, Iâd take on jobs I wouldnât like. I think thatâs how people lose the joy.â

The biggest hurdle to his profession is obtaining the right conditions, planning for optimal light. Heâll get up early for the sunrise, only to have a cloud move in and ruin a shot.

âThatâs the hardest part. Moving buttons is easy. Making it come together is hard. You canât always plan for lighting,â he says. âI strive to take a photo with purpose.â ♦