Is it real, or is it a photograph? 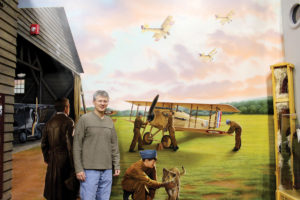 John Neal stands in front of a scene from a WWI French airfield at the Iowa Gold Star Military Museum. Photo by Jackie Wilson

As John Neal begins painting his latest creation, he doesnât set up a simple canvas perched on an easel with a palette containing quarter-sized paints. Instead, he carries a one-gallon bucket of color and paints with large brushstrokes while utilizing a construction lift to reach the nearly two-story-high places. Other times he will lay on the ground on his back or belly. And yet other times, in order to see his work with the proper perspective, he backs up 25 feet to view his efforts.

Neal is a mural artist, creating images on sides of buildings, billboards or giant indoor walls. Not only is his artwork large, it often resembles a photograph.
Neal didnât start out painting big. He discovered he could draw what he could see in sixth grade. A year later, he began drawing comic book art.

âOnce I did the comic book, I got so excited about it,â he remembers. âI knew I wanted that as a career.â

âIf you do it well, people should not know itâs painted,â he says. âItâs photo realism.â

After his billboard stint, Neal painted at Sticks for 14 years. Now, he focuses on indoor and outdoor wall mural art. With nearly 40 wall murals to his credit, his favorite is the Italian American Cultural Centerâs wall on Indianola Avenue. As he painted the building, a passerby took a picture daily of Nealâs progress and presented him with a 100-photo time lapse.

âThe man said it was the highlight of his day every time he drove past it,â Neal says. âThatâs what is gratifying to me â the fact that he appreciated my work is tremendous.â

Neal considers himself an introvert, yet he likes the interaction while out in the city.

âSometimes people want to talk, which is a struggle when Iâm trying to work,â he says. âHowever, the most frustrating part is the weather. The sunlight makes it impossible by picking up textures on the wall. I have to make sure it doesnât rain for 12 hours, or the paint will smear. Wind has a huge impact, with debris blowing. The scaffolding was once caught by the wind and knocked me over.â

One of Nealâs latest projects is painting war scenery on the walls at the Iowa Gold Star Military Museum at Camp Dodge in Johnston. Combat soldiers writhe in pain from gunshot wounds, and smoke billows from enemy fire. Walk inside the submarine control station, and youâd swear you could adjust the knobs, pull out a chair or take a sip of coffee from the steaming mug. But you canât. Itâs just a realistic painting.

Neal says that many people see the entertainment value of his artwork yet donât understand how much effort goes into it.

âYou bust your tail,â he says. âItâs very hard work. Itâs more than the money. Itâs part of who you are. I have to do art. The end result is what drives an artist to the pursuit of excellence.â ♦