Show me your hands, Uncle Red 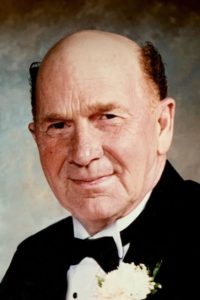 When I was 10 years old, I was talking with my Uncle Red when somewhere in the conversation the topic of a $100 bill came up. Red told me he had one in his wallet, and I asked if I could see it. He handed it to me, and I quickly put it in my pocket and then carefully swapped it in my hand with a $1 bill I had there. When he put his hand out as a signal for me to give the $100 back, I placed my dollar bill in his palm instead. He didnât even look at it but kept his eyes focused on mine and his hand out until I forked over the $100. And then he kept my dollar. I should have known better. Few people could pull one over on Uncle Red. We all should have a fun-loving uncle like my Uncle Red, and I am certainly glad I did.

Richard âLittle Redâ Lane died April 2, 2020, at age 89 during an unfortunate time with the COVID-19 virus at the top of most everyoneâs mind â most everyone, that is, except Uncle Red. He liked things simple and uncomplicated with little fanfare. So although it is difficult for the rest of us to understand how to bury someone we love and celebrate his life at a time when we are told to practice social distancing and sheltering, I somehow think this is exactly how Uncle Red would have preferred it to be. What we donât have in the formal process of a public visitation or funeral, we do most certainly have as memories. Here are a few of mine.

I spent time at the Lane household in rural Whittemore as a young boy in the early 1970s when my mother would send me off for a day or two. Countless hours would pass by as I played with buckets of my cousin Dennyâs Legos on the living room floor. Uncle Red would come home for lunch to see his wife Norma and kid around with me, until he would step on one of those sharp Legos with a shoeless foot. Then he would quickly disappear into the next room, grumbling a few words.

A few years later, with my motherâs encouragement, I would tag along to work with my dad at Lane and Goodman, the gravel and excavation company that he and Uncle Red formed. One day I joined Red, and he asked me to hold the steering wheel while he drove a C60 Chevy dump truck down a dusty gravel road while trying to pour a cup of coffee from his dented thermos. I am sure my eyes were as large as golf balls when I hesitantly grabbed the wheel with my left hand and tried to keep us on the road â with no seat belts, of course. Uncle Red had likely done this many times by himself, but he probably enjoyed seeing how this young boy would respond to the task â which wasnât very good, as the hot coffee spilled in his lap when he took over the wheel to keep us out of the ditch. I recall him using some of those same words I heard during the Legos incident.

The highlight of those days was going to lunch at the local cafÃ© in Whittemore, which was owned and operated by Lita and Maynard Roeber. Eating at any restaurant was a treat back then, but having lunch with my Uncle Red was the best, as he let me order whatever I wanted. I remember him teasing Lita, and she would give it right back to him with a smile on her face. But Red would get the last laugh when he would request a roll of Rolaids on the way out the door, a final jab about her cooking that I now assume was part of a regular routine they shared each day.

Back at the Lane house, the Goodmans and Lanes would often join together on Sunday afternoons. I remember making large kites out of newspapers and flying them from the hayloft in the barn. I would join the big kids â Gail, Cindy and Denny along with my siblings Brenda, Brian and Steve â talking and playing around the giant tree in the driveway, or on the propane tank in the backyard, or in the old schoolhouse that was on the property. I also recall being fascinated with the electric windows in Uncle Redâs Chevy Caprice, running them up and down for what seemed like hours until he told me I was going to wear them out.

In the evenings, we would go inside and listen to âThank God Iâm A Country Boyâ on the 8-track player while Mom, Dad, Uncle Red and Aunt Norma played hands of Canasta around the dining room table. We would then watch âMutual of Omahaâs Wild Kingdomâ and âThe Wonderful World of Disneyâ on the color TV until Mom said it was time to go home.

Years later when I was in high school, Uncle Red asked me if he could see my hands. As I opened my palms to him, he remarked, âNot a single callous on those hands,â and he gave me a half-smile and walked away. A few years ago, my mother and I visited him at his home, and after conversations about baseball, the weather and how many laps he did around the house that day, I asked to see his hands. When he willingly showed them to me, I looked him in the eyes and said, âNot a single callous on those hands,â and I gave him a full smile. He pulled his hands back quickly and shared a half-smile back at me. I waited more than 30 years for that one.

Some of the kids in Whittemore knew Uncle Red as The Candyman, as he seemingly always had a pocket full of hard candy that he was willing to share to make a young personâs day. Candy or not, Legos or not, Rolaids or not, electric windows or not, and even calluses or not, Uncle Red made this kid smile, just like I am doing as I write this. I will miss him greatly. If you were fortunate enough to know him, I suspect you will, too.

Shane Goodman was born and raised in Kossuth County and is now the editor and publisher of CITYVIEW magazine in Des Moines.