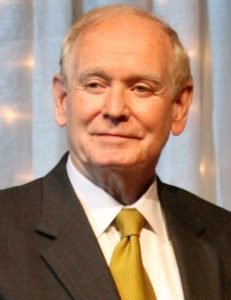 He remained governor because he was a very decent man.

He had one great moment â but it was so great that it permanently changed the face of this state and, to some degree, the outlook of Iowans.

When other governors ignored their plight, Ray invited some 1,500 Tai Dam refugees to this state. He was the only governor to respond to President Gerald Fordâs request for help for the refugees â  Vietnamese men, women and children who had fled to Laos during the Indochina War of 1954 and who eventually escaped to Thailand. Ray and his staff â particularly Ken Quinn â then worked mightily to make sure the refugees were embraced by their new land. And, for the most part, Iowans did embrace them.

Starting in 1975, Iowans took the Tai Dam into their homes and schools and churches and provided shelter and jobs and food and money to help their new neighbors get established. It was a soaring moment in the history of this state.

Four years later, Iowans â led by Ray â did it all over again, welcoming another 1,500 Vietnamese refugees who had fled to Malaysia. Still later, the state embraced refugee families from Eastern Europe.

For years, what is now called Iowaâs Bureau of Refugee Services was an official resettlement agency, as designated by the U.S. State Department.  All the others â there were seven at the time â were church-affiliated organizations. The designation spoke to Rayâs conscience and Iowaâs values.

Ray was elected governor by a fluke. He was interested in politics from the time he was a boy in Des Moines â he was born in 1928 â and became more interested while a student at Drake and, then, Drake Law School. He was a trial lawyer in Des Moines for a while, but politics remained paramount. In 1956, he ran for Polk County Attorney, but lost. In 1958, he ran for the Legislature, but lost.

He became chairman of the state Republican Party in 1963, and in 1968, at age 39, he decided to seek the Republican nomination for Governor. His opponent was Bob Beck, a well-known conservative newspaper publisher from Centerville, and the early money was on Beck. But then Donald Johnson of West Branch, former national commander of the American Legion, joined the fray. In the primary, Johnson and Beck split the conservative vote. Johnson ended up with 78,570 votes, Beck with 63,969 â and Ray with 105,620. The Des Moines lawyer ran surprisingly strong in rural Iowa, a fact he never forgot.

There was no stopping Ray after that. He had no character flaws: He loved his wife, he preferred ice cream to liquor, and he worked very hard. He went on to win the governorship five times â three two-year terms and two four-year terms â serving for 14 years until stepping down and, in effect, handing over the statehouse keys to his lieutenant governor, Terry Branstad. In his last three elections, he carried at least 90 counties â and carried all 99 in 1972.

Ray was always in the moderate wing of the Republican Party â at least until that wing all but disappeared. He was aligned with people like the great Mary Louise Smith and equally great Art Neu â his lieutenant governor for six years âand state Sen. Phil Hill and lawyer David Belin and activists Steve and Dawn Roberts and David Oman and farmer-legislator Andy Varley and former legislator Scott Raecker, who now runs the Robert D. and Billie Ray Center at Drake and who works tirelessly to keep the Ray flame and the fame alive. Today, the entire moderate wing could hold its caucus in the sun room of the Robertsâ apartment in Des Moines. And there would be a few empty chairs.

As Governor, Ray believed in fairness and equality and was an early supporter of the Equal Rights Amendment â in a household with Billie Ray and three daughters he had little choice â supported legalized abortion and opposed the death penalty. He signed into law whatâs known as Chapter 20 â the act giving bargaining rights to public employees, an act that Republican legislators have denuded in the past couple of years.

As a former governor, Ray was dismayed at the turn in his party in Iowa, and he was not-so-privately critical of the conservative positions that Branstad grew to embrace. âI just donât understand it,â he told a friend a few years ago. âItâs just wrong.â

As Governor and as ex-Governor, he was unfailingly polite, but, like most politicians, he had thin skin. He would feel particularly bruised when the Des Moines Register would criticize him, particularly when the criticism came from political columnist Jim Flansburg, who knew (and loved) Iowa as deeply as Ray did. Most people in the Capitol are from small towns, and they have home-town newspapers, and those home-town newspapers are nice to them, he once told me when I was editor of the Register. âThe Register is my home-town newspaper. You should be nicer to me.â He said it with a smile, but it was a pained smile.

In 1976, there was a boomlet to get President Gerald Ford to pick Ray as his running-mate. Ford had listed Ray as one of a small group of acceptable people, and folks like David Belin beat the drum for him. But luckily for Ray, Ford picked Bob Dole of Kansas. That ticket lost to Jimmy Carter and Walter Mondale, and Ray stayed happily at home in the Governorâs Mansion.

Gov. Robert Dolph Ray was 89 when he died of Parkinsonâs Disease on July 8.