The burbs have become far more diverse than they were a generation earlier. 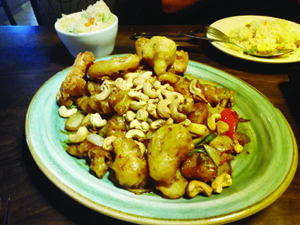 De Rice also has a superb Chinese menu like this cashew chicken.

Until the 21st century, Des Moines proper contained the overwhelming percentage of good ethnic restaurants while the suburbs were most famous for national chain restaurants and their accompanying neon flares. That has been changing for 20 years. Waukee led the way in ethnic diversity, but all the burbs became far more diverse than they were a generation earlier.

The latest movement in the cosmopolitan upgrade of metro outliers is in Johnston, particularly its Asian cuisine. For years, Wongâs Chopsticks was Johnstonâs Chinese restaurant. It remains the best dim sum service in the metro, but it now has lots of competition. Johnston China CafÃ© joined the show with classic Chinese American food and some of the best prices in the genre. Most lunch specials are less than $7 and most dinners are less than $10. They also have a pho menu, a Cambodian menu and an udon menu.

Then came a Johnston version of Wasabi that brought the local chainâs superb sushi and cocktail menus with more noodle dishes than previous Wasabis, including pad Thai, soba and ramen. Mandarin Noodle House opened a store in Johnston with the same menu as their excellent Mandarin Grill and Sushi in Clive. They have a regular Chinese menu and a traditional menu, which includes some dishes not seen in many Iowa restaurants, like jelly fish, mapo tofu and black bean sauces.

The latest entry in Asian Johnston is De Rice, a large and handsome place just north of the interstate. It has a comprehensive, Cheesecake-Factory-sized menu that advertises itself as Thai and Japanese but also includes a good Chinese menu plus some Korean specials, Lao larb and the famous glass noodles of Singapore. From the latter, I tried superb versions of salt and pepper chicken and almond chicken, plus a shrimp won ton soup.

Sushi is fine, but I would shade Wasabiâs for their better selection of exotic, mostly Hawaiian fresh fish. The Thai menu was a big pleasure. One general disappointment about Thai and Chinese cuisine in Des Moines is the lack of interesting Asian vegetables and the abundant use of broccoli, sweet peppers and carrots. De Rice has stir fry dishes named for eggplant, Napa cabbage and bok choy, and they were generous with those treats. Ginger, lime leaf, lemongrass and chilies were also obvious in dishes, but spice levels seem to average a point and a half milder than those at Eat Thai.

Thai curries and soups pleased with deep flavors and generous use of proteins. One can upgrade to roast duck, calamari, scallops, shrimp or mixed seafood. My duck option in a red curry was loaded with the honorable bird.

In another nice touch, chef specialties came with a choice of excellent cucumber salad, mango salad or roti, the unleavened wheat bread that has spread from India to the Middle East and Johnston. The best of those I have tried is the softshell crab crisped with spinach in Penang curry. Itâs not always available, though. In fact, as with most massive menus, there are several things that are not always available.

The prices at De Rice are quite friendly. That soft shell crab is the most expensive dish on the menu at less than $20. Most dinners are in the $10 to $12 range, and most lunch specials are $8 to $10. There is a full bar and plenty of free parking. Several large screen TVs played without volume for sports fans. ♦