The Fletcher has lots going on

There is no theme in this place except that it is all cool stuff that owner Denny Elwell enjoys and likes to share. 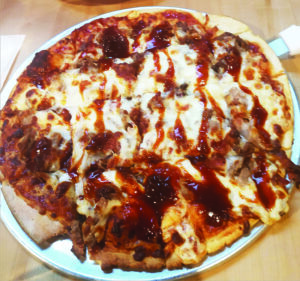 A pizza from the smoker at The Fletcher

A trip to Memphis 25 years ago coincided with a convention of the Church of God in Christ, one of the three largest congregations of African American churches. Hotels were overbooked, and it made a festive weekend everywhere. On my initial tour of Elvisâ home, Graceland, tour guides divided us into groups of 10 to avoid overcrowding the rooms. We were in a line just ahead of a matronly child of God and her grandchildren. When the tour guide opened a master bedroom closet to bring out five samplings of âthe Kingâsâ favorite outfits, grandma restrained her offspringsâ excitement and admonished them.

âLet this be a lesson to you children. All the money in the world canât buy good taste.â

I recalled that on my first visit to the newly reopened âThe Fletcherâ in Ankeny. Maybe the only rhyme or reason to Gracelandâs decorating style was simply that Elvis loved everything. Kings donât care about judges. The same thing seems to apply to The Fletcher, an eclectic collection of strange and marvelous things with no theme. There is a bell from a Muhammad Ali championship fight, an original mirror from New Yorkâs iconic Flatiron Building, chairs covered with expensive saddles, rows of kindergarten-sized school desks, a vintage Harley Davidson, 1950s and 1960s era bicycles, exquisite copper kitchenware, antique signs that could be a virtual historic museum of Ankeny, plus valuable art.

An original Frederick Remington sculpture rests on the main bar. While drinking there, two TVs behind it played âLove Islandâ and âBig Brother.â Owner Denny Elwell is the Elvis of Ankeny. There is no theme in his place except that it is all cool stuff that he enjoys and likes to share.

The new Fletcher (named for a Des Moines city councilman who founded Ankeny) is operating with a management contract with Orchestrate, a company that runs Centro, Django, Zombie Burger, Malo, Gateway Market CafÃ© and South Union Bread. Chef George Formaro oversaw the new menu. It reflects both Formaroâs and Elwellâs passion to share their favorite things with friends.

The cool stuff does not end with furniture, sculpture and stuff on the walls. The ice machine makes the kind of perfect cubes that one rarely sees outside the finer lounges in Las Vegas. All ice should be like this. The smoker turns out things that many barbecues have given up on, namely fatty brisket. This is something that is common in Texas, but in Iowa people complain about it until restaurants just donât even try anymore. You have to request it at The Fletcher, but it can be done.

Formaro says that the expanded smoker and the pizza oven will be the center of the new menu. From the smokehouse, both the baby back ribs and, particularly, the pulled pork, impressed, along with the brisket. Home-smoked pastrami is made in house and has several applications, including Reubens.

Formaro is famous for his pizza pies at Centro. These at The Fletcher are similar, rather bargain priced, thin crust pies. Along with traditional offerings like the Margherita, the restaurant offers a smokehouse pie with pulled pork, brisket and chicken included. The recommended sauce is a barbecue sauce. I might ask next time for the regular Italian sauce as the BBQ sauces are very sweet, even the Carolina. In fact, people who donât usually like Carolina sauce might like this one.

A peach crisp was made with smoked peaches. The verdict on the dish is undecided. Portions are grand; salads included some fresh local ingredients. Bottom line â this place has something that will amuse everyone. Plus, the food and drinks are exceptional. ♦