The slow-roasted prime rib at AJâs was as marvelous as it gets. 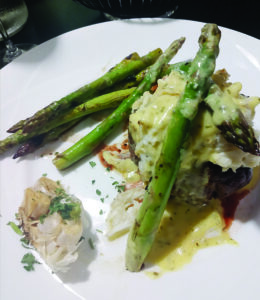 Some of the disappearing classics of the last century have been coming back, at least in a few places. Hot beef sandwiches, hot pork sandwiches, meatloaf and even the Herbert Hoover-driven chicken and noodles of the Great Depression are popping up from oblivion. And so is the great Iowa steakhouse. This could be a byproduct of COVID-19 frustration. As with the Great Depression, uncertain times created a longing for old fashioned comforts.

One place that is working such dishes into their rotation is Big Alâs BBQ. That smokehouse is featuring its un-sauced smoked meats in hot beef sandwiches, hot pork sandwiches, macaroni & cheese, and chicken & noodles. They also have some Southern comfort foods like fried okra, brisket gravy covered french fries, homemade mac & cheese and fried pickles.

The most impressive renaissance of the COVID-19 era in Des Moines is the upgrade of AJâs Steakhouse at Prairie Meadows. Perhaps, the track, casino and hotel needed something big to woo back customers after the shut-in fatigue subsided. For whatever reason, this restaurant has transformed into as fine a steakhouse as Iowa has to offer. 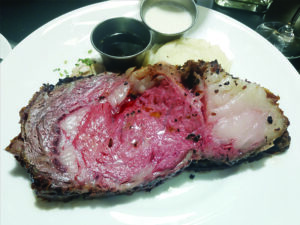 First of all, they have brought back all prime beef and lamb. To my knowledge, all prime is only found locally at 801 Steak & Chop House and Flemings, where it is priced more dearly than it is at AJâs. The slow-roasted prime rib here was as marvelous as it gets. Coming in two generous sizes ($42 for a full pound cut), it was served as ordered âwith a large portion of spinalis dorsi.â Sometimes called rib cap, that is the tender outer rim that only covers a small part of the prime rib. Most steakhouses have no idea what it is. Not AJâs. Like all entrees at AJâs, it was served with a salad and a choice of pasta or potatoes. Those are almost always add-on costs at other all prime steakhouses.

That was hardly the only dish that stood out. Steak Oscar was beautiful and delicious. A half-pound cut of filet mignon was covered in lump crab, asparagus and Bearnaise sauce. The steak de Burgo offered a choice of an 8-ounce filet or a 14-ounce ribeye in white wine garlic cream sauce. Lamb chops were served with minted chimichurri, an idea rarely expressed in local places. They were served perfectly rare, an execution rarely noted in Iowa. All steaks and sauces can be dressed up with Bearnaise, crusted blue cheese from Maytag or Parmesan, caramelized onions, lump crab, sauteed mushrooms, or herbed butter for a small fee.

Braised short ribs ($28) were plated with Hatch chilies, garden slaw, cilantro avocado crema, and a choice of salads and of potatoes. A house special dinner for two ($50) on Wednesdays offered salads or French onion soup or a shared appetizer like excellent fried calamari in Remoulade, onion rings or artichoke dip, plus two entrÃ©es like fried chicken, pasta, pork chops, salmon or meatloaf. (One night, meatloaf was made with wagyu beef, but that was not a Wednesday). Plus, dessert choices of four-layer chocolate cake or creme brulee with Grand Marnier were offered. All desserts are displayed in the restaurant lobby, another old fashioned trick. One night, a slice of carrot cake was so large that three of us could not finish it off.