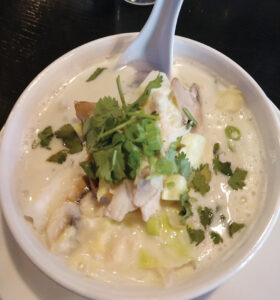 Ingersoll Avenue reflects the collective conscience of Des Moinesâ westside. In the late 1950s, traditional restaurants like Sherryâs, Noahâs and the Imperial House entertained adults while their disgruntled teenagers turned to the sanctuary of fast food. Henryâs, the precursor to McDonaldâs in this town, settled there with a cool coastal vibe. Teens brought skateboards there to show off for other teens. Lifelong love vows were professed on the hoods and backseats of Bel Aires and Ramblers.

Jesseâs Embers brought the steakhouse culture to Ingersoll in the 1960s, but fast food ruled with Burger King, Howard Johnsonâs and Arbyâs. In the following decades, the fast-food joints were converted into banks, low-cost housing and coffee chains. Lately the avenue has been reborn as a destination dining spot with Eatery A, Harbinger, Panka, BAH, Teddy Maroons, Lucky Lotus and Gusto joining proud survivors Jesseâs Embers and Noahâs. Fast food has come back, too, with multiple sub and burrito outlets.

The latest thing on the avenue is more conversion. Uncle Wendellâs BBQ was changed into the diner Lacheleâs Fine Food. They served smashburgers, hot dogs, sandwiches and weekend brunch. Their burgers and homemade fries are as good as anyoneâs. Perfectly seared burgers remind me to update an old Hardeeâs commercial â they are $16 burgers for $8. Teddy Maroonâs became Whiskey River, an upscale sports bar with coconut shrimp, reuben eggrolls, excellent two meat meatloaf and steak de Burgo. In the same Soll complex, the Brazilian steakhouse BAH became Thai Flavors. Both Teddyâs and BAH were extremely short-lived despite being busy. COVID, perhaps, accelerated the speed of Ingersoll conversion, but new things are definitely buzzing. 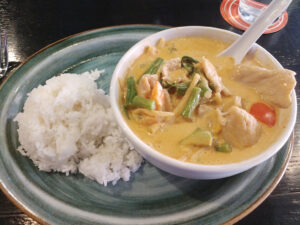 A Brazilian place becoming Thai makes sense to travelers. In Thailand, locals remind you that Thais are the Asian Brazilians, and the opposite happens in Brazil. The commonality has everything to do with the undaunted pursuit of good times. Thai flavors are respected at their namesake restaurant. Thai cooking, more than any other kind, tries to incorporate all flavors â sweet, salty, sour, bitter and umami â into dishes. Thai Flavors does that in a most agreeable manner.

Usually, the most difficult dish for non-Asian tastebuds is green papaya salad. It is heavy on both bitter and spicy hot. Thai Flavors allows a choice of heat levels and cuts the bitterness with tomato. Usually, the easiest dish for such diners is tom kha kai. That is a chicken stock soup mixing curry paste with coconut milk. TFâs version is one of the sweetest I have met, making it easy to upgrade the hotness number. This soup is a virtual curry.

Five kinds of traditional curry are made here â red, green, masman, Penang and yellow. In addition, the store turns out two off beat curries â avocado and pumpkin. All are excellent and accessible to sensitive tongues. I particularly liked the way avocado sweetened the heat of a green curry. Pay attention to the menu descriptions of each dish. Masman and Penang curries feature peanuts.

Stir-fry dishes are also quite accessible, particularly the house-made soy sauce used in eggplant stir fry and the ginger/wine sauce used in ginger stir fry. TF presents several types of noodle dishes and serves them both as stir fry or cold salad. They also have a Chinese menu and sushi menu. Sushi and sashimi delivered good knife skills and handsome presentations but not the freshest of fish. A walnut shrimp dish was a delightful reminder that this was Britainâs most important contribution to their occupation of Hong Kong. Both hours and menus have been changed since opening, so assume nothing is the same and verify. Leave room for dessert here, too. ♦