The Baja and the Horn 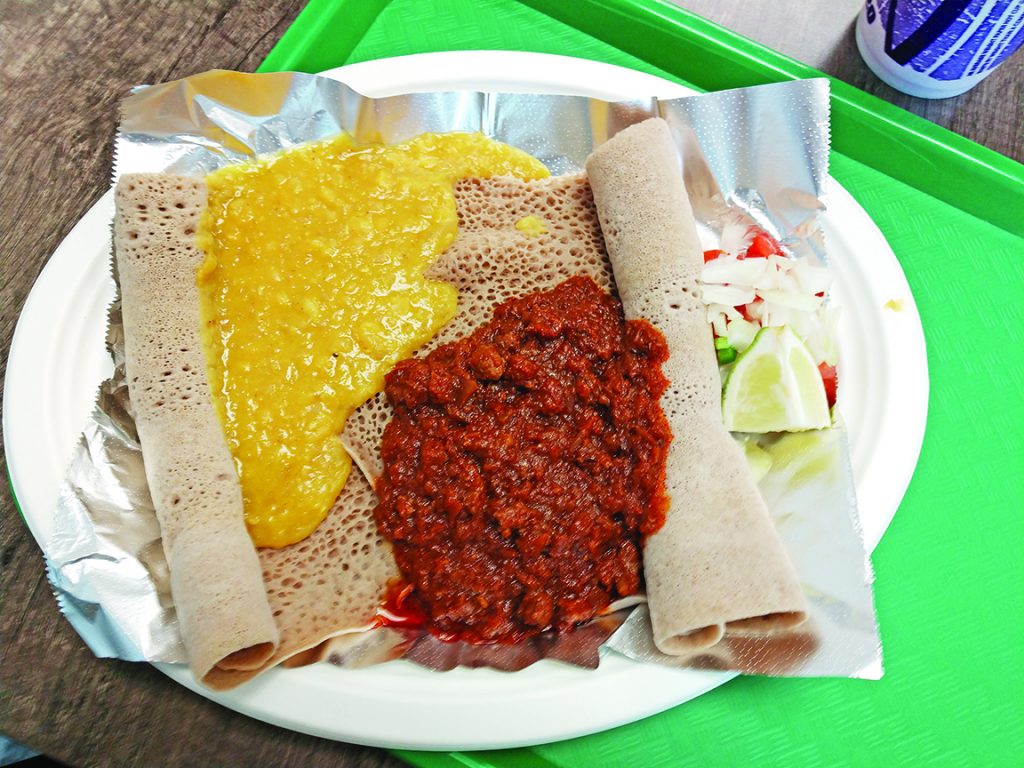 The cuisine of Des Moines continues to become more exotic. Two of the worldâs greatest peninsulas, nearly half a planet away from each other, supply the newest examples of the metroâs growing diversity. Between them, the Horn of Africa and Baja California occupy more than 1.2 million square miles. Because peninsulas are nearly islands, the two areas have long enjoyed the bounties of both international trade and fishing.

Ethiopia is the largest country on the Horn of Africa. In the last half century, it has developed from a poor country beset by natural calamities and famines to a proudly wealthier spot with a burgeoning tourist trade. The cuisine of the Horn has been heavily influenced by South Asian trade and immigration, particularly from India. Gursha Ethiopian Grill provides a happy introduction to the genre.

âGurshaâ is an Amharic word meaning âmouthful,â âtipâ or even âbribe.â In Ethiopian cuisine, it refers to sharing a portion of food, set on a piece of injera (teff flour bread) and hand fed to oneâs dining companion. I have sat at tables set with a piece of injera that was as wide in diameter as 4 feet where food is shared by as many as a dozen people. At Gursha in Des Moines, everything is individualized, Subway/Chipotle style. In the cafÃ©âs earlier days, one could order five vegetarian dishes and five meat dishes, but lately portions have been downsized to two dishes per order of bread or rice. This appears to be popular as the restaurant seems busier each time I visit.

Injera (âlovegrassâ) is a spongey bread that absorbs the flavors of whatever is served upon it better than any other bread. It is cultivated almost exclusively in the Horn. I have tried it at Gursha with both chicken and beef tibs (prepared with jalapenos, onions, tomatoes and berbere), doro wat and alicha (basically chicken and beef curries in the Indian style). Better are the vegetarian dishes. Missir wot, shiro wot and kik alicha wot are lentil and split pea curries similar to dhal. Gomen is a fabulous collard green dish, and alicha was a curry with cabbage and root vegetables. Sambusa (Indian egg rolls) and smoothies were also served.

Baja Cocina calls itself âsu casa, su rancho,â and the main vibe is a family atmosphere. The busy kitchen is filled with cooks of all ages, grandmothers and their progeny. Most everything is made from scratch, and the tortilla dishes are made thicker than at most places. Barbacoa of beef, birria of goat, chicken and steaks are treated to sopes, burritos, gorditas, tacos and empanadas. Both birria and barbacoa have been sold as consomme, but not always. Posole, menudo and tamales are also featured and homemade.

Baja Cocina differs from other local Mexican cafÃ©s in their breads, which are heavier and often deep fried. Chile rellenos at one place often seem indistinguishable from those at other places. Not here where they are obviously freshly breaded and fried. Guacamole was decadently served in a large mocajete. Shrimp dishes, ceviche and fish dishes are worthy of a place named for the land between the Pacific Ocean and the Sea of Cortez. Baja hot dogs are loaded specialties of northwest Mexico.

Tuesdays feature $1 two tortilla tacos, one of the best deals in town. Margarita-style drinks are made with chili powder rimmed glasses as well as with salt and lime. Lime Margaritas are only $3 on Wednesdays. A large line of Jarritos soft drinks were also sold. ♦