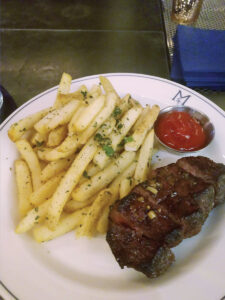 Mulberry Street Tavern, in the newish Surety Hotel, covers the world to provide a cross sampling of marvelous amenities from both small villages and large cities. Surety is a part of Aparium, a Chicago based hotel group specializing in repurposing old and historic buildings. The rooms here are handsome if not
large. They all feature Sferra sheets, the northern Italian linen maker known for producing the worldâs best bed ware since the 19th century. Some sets of Sferra sheets cost as much as most people spend on large beds.

The lobby is gorgeous and occupies some hallowed ground that once included a state-of-the-art Italian coffee shop and the ground breaking Surety insurance company, which opened the building nearly a century ago. Meeting spaces are excellent, Wi-Fi is free, and the excellent bar and restaurant will deliver to your room. Art work is from Olson-Larsen, a mostly Midwestern gallery. A recent rate check showed rooms going for $125-$164. I was told weekdays are a better deal than weekends, which shows how much Des Moines has changed since the Savery remodeled.

The restaurant is also a handsome devil of a place highlighted by a taxidermic raccoon with a flamboyant flair in her wardrobe. Wood, metal and barstools, so heavy their movement sounds like an industrial accident, highlight the decor. High tops and short tables are equally divided.

Steaks are a piece de resistance, especially the chefâs cut for two, which presented superb rib meat sliced off the bone and served with de Burgo sauce and horseradish cream. Steaks are served with Laguiole knives. Those are renowned pieces of craftmanship from the town in Aveyron province in southern France where most of the 1,200 people work for the knifemaker or a famous cheesemaker. On one occasion, there was a divine black truffle pasta, but on a return visit it had been replaced with carbonara. Also, a tasty short rib dish had been replaced, as it often is when winter yields to spring.

A superstar of the menu was pappardelle, the wide pasta often served with Bolognese. Here it is served with duck confit ragu. Steak tartare
and five spice pumpkin gnocchi were crowd pleasers. Lamb skewers produced something more like meatballs than typical skewer meat. A cheeseboard was less interesting than a charcuterie board. We tried some chicken liver mousse and both raw and grilled oysters. We could not pull the slot handle on tinned fish even though it was from Preserved States, the Chicago company with a reputation for instant tinning on boats. Salmon was from Skuna Bay, near Vancouver and renowned. Staff said that the grilled half chicken and the meat pot pies were two of the most popular orders. Both kale and arugula salads pleased our table.

There was no dessert menu on my visits. Wine lists, tap beer and booze flights were upgrades over most. Suntory Japanese whiskey is worth trying if you have not had an opportunity yet. Fancy drinks like âsmoke and mirrorsâ are within the bartendersâ repertoires.

Bottom line â this place goes the distance to provide unusual worldly experiences not often found in Des Moines. Itâs a stylish place to be seen or just to drop in for a nightcap.

The former Red Rossa will become a Franka pizzeria sometime soon. Itâs been vacant more than a year. ♦