Italian House is full of surprises 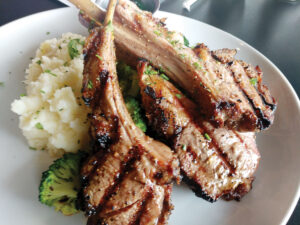 There are few restaurant genres that Des Moines expects to conform to formula. Seafood cafÃ©s here are all over the place, from the air freighted opulence of Splash to the northwest Mexican bounty of Isla del Pacifico, to the fried wonders of Seafood Trap, the itâs-all-about-the-fish attitude of Waterfront, the ceviche splendor of Panka, the Japanese wonders of W-Tao, Miyabi 9 and the Wasabis. Even each Wasabi is different from the others.

Most Italian places since have followed much of the formula. Lucca and Centro have added a lot to it, but they still fulfill most expectations. Itâs a brave rare bird who opens a place called Italian House, on the southside no less, and delivers something different.

Among the delightful surprises at Italian House are veal and lamb dinners, priced less than $20. Veal was dropped from the old formula a couple decades ago in Des Moines. Like Santinoâs earlier last year, itâs back in glorious forms here. Marsala came with superb wine and mushroom sauce, Parmesan style with red sauce and cheese. Lamb never really had a place in Des Moines Italian cuisine. Here it is a piece de resistance. Grilled, Frenched crown racks of lamb are seared, heavily seasoned on the fatty side and sliced into four long boned chops. Served with mashed potatoes and âbroccoli rabeâ florets, with a salad or soup, this is a great bargain.

The âbroccoli rabeâ term represents the quirks of the place. First of all, the vegetable is called rapini in Italy and Italian restaurants, and its beauty is in its slender stems and leaves. Why remove them? I think broccoli was substituted, but why remove its stem?

Other delightful surprises included rollatini, pomodoro, scarpariello, osso bucco and Bolognese-style rigatoni. Rollatini is perhaps the greatest application of eggplant, thin sliced and baked with sauce and cheese. This version was sauced afterwards. Itâs somewhat like
moussaka but more delicate. It was well executed here as an appetizer. So were the calamari, which included whole babies and rings.
Pomodoro is a tomato sauce with red pepper and garlic. Scarpariello means shoemaker and suggests that it is made of anything that is available. Osso bucco was made with pork, not veal. The restaurant also pays homage to its predecessor in its location â Nickâs â by serving a breaded pork tenderloin.

Steaks, also all less than $20, included New York strips, filets, T-bones and ribeyes. I tried a filet and a ribeye, and both are bargains indeed. Also on the bargain side, the cafÃ© offers a short list of daily lunch specials, which produce meals less than $10. A spaghetti and meatball lunch with salad presented tasty meatballs that did not resemble those typical of the southside. There are many chicken dishes, and the traditional cordon bleu is the most popular entrÃ©e according to one waitress. Rice is offered with as many dishes as pasta.

The dessert menu is another surprise. It includes just three options, none what you expect in Italian Des Moines today. Vanilla ice cream, chocolate ice cream and fruit cup. On that line, one specialty of the house is the flavored margarita. A margarita flight is the final surprise and bargain. Instead of small tastings of several types, they come in large glasses. ♦