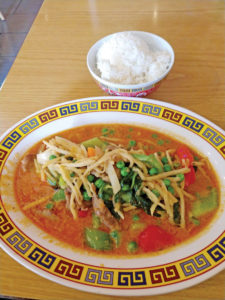 Ingersoll has also seen an everchanging series of new hot spots. Colorado Feed and Grain started that scene. Garboâs, Wellmanâs Pub, Star Bar, Eatery A, and Juniper Moon all had their moments when they were the place to go. Bartenderâs Handshake is the latest in this category.
Named for trendy shots of usually sweet liqueurs, especially Fernet Branca, served by bartenders to other hospitality industry insiders, BH has quickly become packed. Bernie Sanders was there the last time I visited. Drinks are definitely trendy. Try finding a Sinaloan Milk Snake anywhere else. Thatâs milk-washed Del Maguey Vida mezcal, St. George Spiced Pear Liqueur, Yellow Chartreuse and lemon. Though they serve a traditional Old Fashioned, they also have another version made with George Dickel rye, toasted-coconut-infused Old Forrester bourbon, Smith & Cross rum, raw sugar syrup, All Spice dram, and Daleâs Bellhop tiki bitters. Even Bartenderâs Handshakes are made with more than one ingredient here.

Though the place is tiny, it has an excellent kitchen run by Zach Gutweiler of Reedâs Hollow and Gaslamp fame. With the exception of the egg salad âsando,â which is made with kewpie mayo from Japan, the menu is vegetarian. Of course, the cityâs first vegetarian bar food would be on Ingersoll. I had a cold noodle bowl that was as flavorful as any noodle dish I ever tried. It featured mint pesto, ground mushrooms and chili crisps. A parker roll was stuffed with squash and mushroom fondue, homemade pickles and chili mustard. Crudite was made with fluctuating seasonal vegetables, red miso, tofu and tahini. Salads included avocado and pistachios.

Also new to Ingersoll is Lucky Lotus. In the spirit of the new Ingersoll, this southeast Asian cafÃ© is distinctly different from others in town. Its dÃ©cor gives that away with a hodgepodge of old Asian movie posters, Asian food art and photography, a ceiling hung with upside down Asian parasols, and old Des Moines signage. Sharp looking new furniture is also a feature.

Unlike any local southeast Asian cafÃ© in my ken, this place is self-service. Nobody asked us if we had a favorite degree of hot spice, nor if we had peanut allergies. (Servings were anything but spicy hot.) The menu is unique to these parts, too. Pho can be made with chicken or vegetable stock, as well as beef. There is no brisket, no rare roast beef, no tendon available. Just steak and meatball. Better was mee khati, a red curry noodle soup with minced pork and the usual vegetables.

Egg and spring rolls came in five versions. My favorite appetizers, though, were heavenly beef (crisped jerky and sticky rice) and lucky tofu, which was crisped and served with a citrus vinaigrette. Curries and stir fry dishes seemed to all be made with the same vegetables. Not Asian vegetables, other than bamboo shoots, but broccoli, bell pepper, peas, potatoes, onions and carrots. Many dishes include eggs. Bun (noodle salads) did not include braised pork, usually a bun staple, just nem nuong, a Lao sausage that is an acquired taste.

Bottom line â these two places add a lot of personality to the townâs most eccentric street. ♦